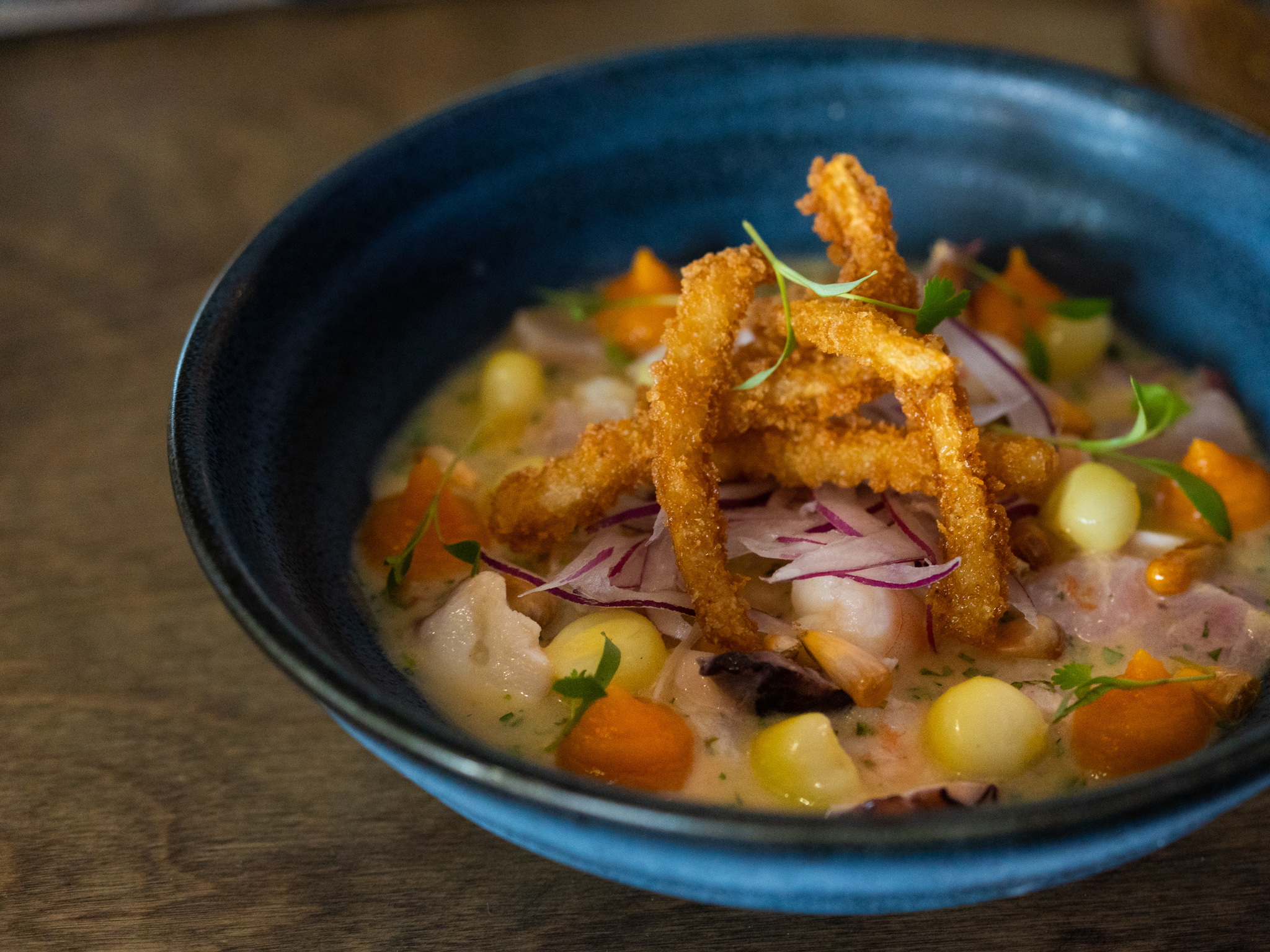 Pacha Nikkei, chef Masaru Fukuda’s new restaurant at 10001 Westheimer, highlights Nikkei cuisine, a harmonious blend of Peruvian and Japanese flavors and techniques that is unique to Peru. Upon entering, a woman waiting on a takeout order gushed to me and my dining companion that we were in for a treat. She excitedly told us that she’d visited three times since the eatery opened a few weeks ago, and that as a Peruvian, she hadn’t found good examples of her native food in Houston until now. The stranger certainly set high expectations before we were even seated.

Houston Food Finder had been invited to try some dishes, and we were ready to buckle in for the ride. We started with pisco sours. Traditionally made with pisco (a clear, South American grape brandy), lime juice, simple syrup, and egg white, my chica morada-infused pisco sour had a brilliant burgundy color and sweet earthiness thanks to the purple corn used to make the chicha, a traditional fermented beverage in Peru. A frothy egg foam capped off the top, lending a cloud-like texture. In contrast, my companion’s Maracuya Pisco Sour was bright and refreshing, sporting plenty of passion fruit flavor without being too sweet. We didn’t try the Wagyu Old Fashioned, which is made with Wagyu fat-washed bourbon and a shiitake and nori reduction, but I’m a sucker for an intriguing cocktail with a savory bent to it, so it’s definitely bookmarked in my mind for a future visit.

Our server recommended the papitas a la Huancaína as a starter, a classic Peruvian appetizer named after the Peruvian city Huancayo. It’s a cold dish featuring a medley of tender Peruvian potatoes in a creamy Huancaína sauce made with evaporated milk and cheese. Chef Fukuda’s interpretation replaces the black olives that typically garnish this dish with dashes of a housemade botija olive aioli, and finishes it off with a quail egg perched on top. Each bite is generously coated in the slightly peppery cheese sauce, and a swipe through the violet-hued aioli gives an extra punch of fragrant richness.

Our server also recommended the gyoza frita, or deep-fried pork dumplings drizzled with tonkatsu sauce and yuzu-kosho aioli, then topped with bonito flakes and nori. The chef could have applied the yuzu-kosho aioli more liberally, but that didn’t take away from the experience. No crimes committed here. It was a perfectly good starter, albeit not a standout. Dumplings, including gyoza, are ubiquitous these days, so there’s a lot of competition.

Pacha Nikkei’s menu features an entire section dedicated to Peruvian ceviche, a dish that some say is synonymous with Nikkei cuisine. This is due to the practice of curing the fish in citrus juice and serving it immediately rather than letting it marinate for hours, a method that has its roots in Japanese sashimi. The ceviche chalaco is a vibrant kaleidoscope of flavors and textures starring thick slices of Peruvian mahi-mahi, plump shrimp, octopus and golden pieces of fried cuttlefish scattered on top. It’s all nestled in a spicy, lime-based leche de tigre (tiger’s milk) featuring aji amarillo chile and, to my delight, rocoto, a fiery red pepper that I fell in love with during a visit to Peru many years ago and haven’t encountered since. Soft kernels of choclo (Peruvian large kernel corn) and crunchy bites of cancha (dry-roasted crunchy corn kernels) give a fun contrast in textures to the softer seafood, and ribbons of red onion add sharpness to each bite. The entire ensemble is punctuated with dabs of sweet potato purée, which our server recommended that we eat between bites of the tart, marinated seafood. The zesty leche de tigre has plenty of heat from the chiles that lingers with each bite, which the sweet potato purée tempers.

The pulpo, one of the hot dishes, is a tender piece of Spanish octopus that doesn’t require a knife. Served with a perfect bit of char to add smokiness and texture, it’s plated with a medley of Peruvian potatoes, seasoned choclo, botija olive aioli and a brilliant green sauce made from huacatay, an aromatic herb from the Andes that is sometimes called black mint. The potatoes and botija olive aioli felt a bit repetitive as they were already featured in the papitas a la Huancaína, but were still a welcome side, as were the smoky seasoned choclo kernels — which are always fun to eat.

The lomo saltado was the standout dish, and was one that the woman I’d met at the front praised the most. This classic chifa (Peruvian-Chinese fusion) stir-fry is served as a generous portion that two can easily share. The soy- and oyster sauce-marinated beef tenderloin pieces are wok-fried, resulting in mouthwateringly bites of beef that are tossed with slightly browned slices of red onion for a bit of sweetness. The juicy tomato slices hold their shape and aren’t mushy, but also don’t make the rest of the dish watery. Each bite bursts in your mouth like an umami bomb. Lomo saltado is classically served with French fries, but chef Fukuda replaces that element with potato wedges that wonderfully absorb all the flavors from the beef and tomatoes. Even after our other plates had been cleared off the table, we kept the lomo saltado to occasionally pick at, wanting to savor it a bit longer before dessert.

My dining companion and I commented that the dish reminded us of a well-made plate of Vietnamese bò lúc lắc, which translates to “shaking beef,” and funny enough, “lomo saltado” translates to “jumping tenderloin,” referring to the way the dish is tossed in the wok during preparation. It’s one of those fun coincidences that shows how certain food preparations have parallels across the world.

We ended the evening with Lucuma Cheesecake, a dense and creamy dessert. Lucuma is a fruit native to the Andes that has a distinctive, caramel-like quality to it. The cheesecake’s fruity undertones and caramel notes reminded me of Taiwanese pineapple cake. Our server said that it reminded her of cajeta. It was an example of how a common flavor can trigger different memories for different people, perhaps proving that masterfully used ingredients blended in all the right ways can result in moments of universal enjoyment.

Peruvian cuisine isn’t highlighted nearly enough in Houston, much less Nikkei cuisine. If Pacha Nikkei can be an ambassador to this brilliant and highly underrated landscape of flavors, then maybe we’ll all find our lucuma cheesecake moment.

When she isn’t daydreaming about her next travel destination, Cindy likes to crochet, mix her own cocktails at home, and torment everyone with dad jokes that are so bad they’re good. Otherwise you’ll most likely find her getting cozy with a flat white or a glass of whiskey at a favorite local haunt!