All Wrapped Up: Best Places to Eat Dumplings of the World in Houston 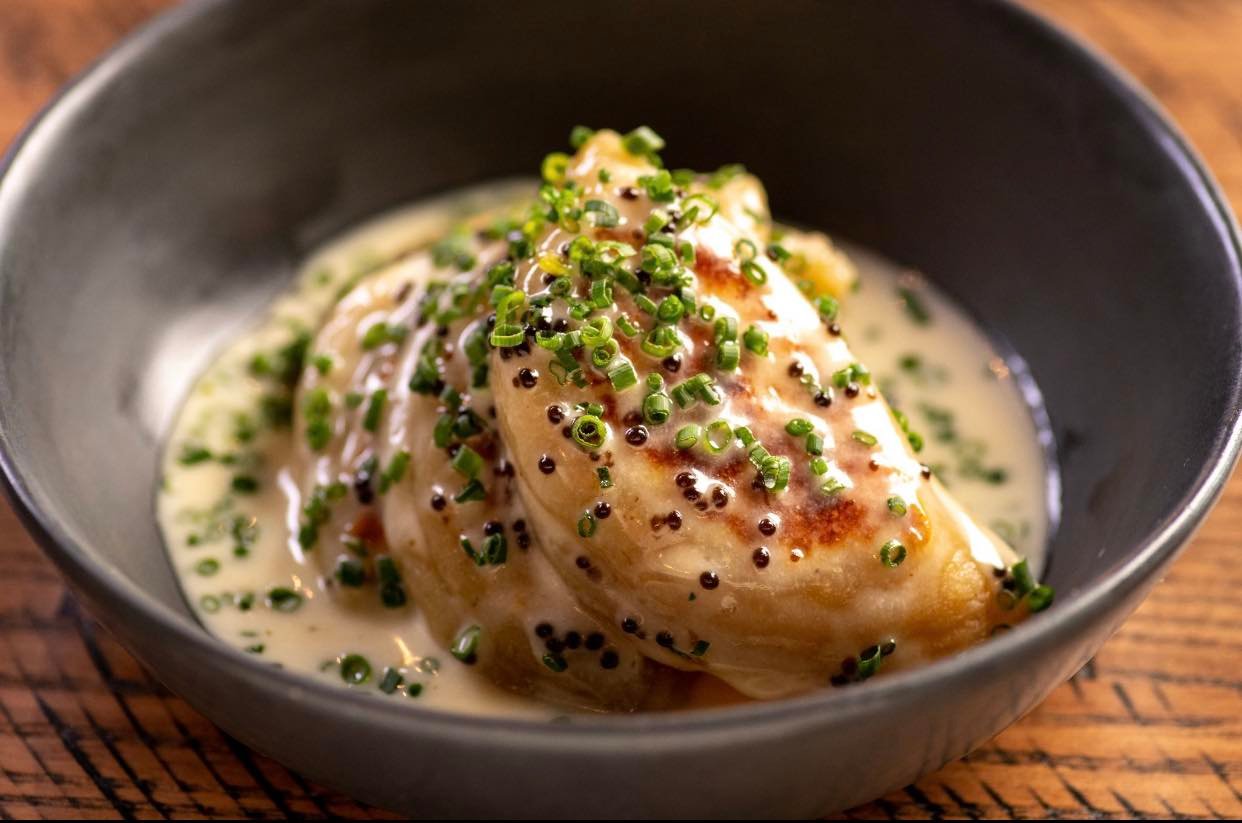 Truffle and caviar pierogi at Riel. Photo by Bradford Eu.

If you’ve watched the “Stuffed” episode of “Ugly Delicious” with David Chang, you’ll find him cheekily pitting Asian dumplings against stuffed Italian pasta, attempting to see which reigns supreme, while criminally neglecting the wide world of other culinary delights wrapped in dough. A recent article by Jen Harris of the LA Times even offers up the peanut butter and jelly-filled after school snack Uncrustables as a candidate, blowing the door wide open in terms of the expansive exploration that can be done when it comes to dumplings. We’re here to sound off for the rich international landscape of dumplings that Houston offers, and for the sake of preventing this from becoming an hours-long read, we’re going with the broad definition of a dumpling being a dish that involves dough wrapped around a filling. (The delicious dough-ball variety of dumplings could be a list in itself.) We’ll let you decide for yourself which stuffed parcel wins. Spoiler alert: there’s no right or wrong answer, and in the game of dumpling thrones, everyone wins.

One Dragon, 9310 Bellaire: The xiao long bao (soup dumplings) at this unassuming cafe tucked in the back of a Chinatown strip mall achieve the delicate balance of whisper-thin skins that are still strong enough to contain the piping-hot pork broth tucked inside. These dumplings won’t break until you’re ready to eat one and let all the flavor burst forth. The pork filling is savory and tender, and the dumplings fit right on your spoon, so you can enjoy them all in one go. Add a splash of vinegar and some ginger threads to give them extra punch. The pan-fried shen jian bao (crispy-bottom pork buns) are also excellent. The bready exterior is fluffy but with a crisp, fried bottom that crackles before the juices locked inside with the pork filling are released.

Empire Turkish Grill, 12448 Memorial: You won’t find manti on the menu, but if you ask for it, your server will bring a large plate of these bite-sized Turkish dumplings filled with spiced, ground lamb and covered in luscious yogurt sauce. Small enough to be eaten by the spoonful, these comforting little parcels can easily be shared — but you might end up telling your dining companions to get their own.

Xin Chao, 2310 Decatur Street: For a more contemporary take on dumplings, look no further than the smoked beef cheek dumplings at MasterChef fan-favorite Christine Ha and co-executive chef Tony Nguyen’s restaurant, where tender beef cheek is enveloped in thin wonton wrappers and served in a vibrant and spicy lemongrass bún bò Huế broth, named for a city in Vietnam. It’s like having a taste of Houston in one bite. The smokiness in the beef is reminiscent of Texas barbecue, beautifully coexisting with the fiery bún bò Huế broth — which pulls no punches in its intensity — and all accentuated with a bouquet of fresh herbs on top. You’ll want to ask for some bread to savor the broth a little bit longer after the dumplings are gone.

Riel, 1927 Fairview: While we mourn the loss of pierogi monarch Pierogi Queen and await the opening status of Polonia, Riel is here to fill that void with potato and cheddar pierogies. These pillowy half-moons are stuffed with creamy, cheesy filling, pan-fried in butter until crisp and topped with caramelized onions. Those looking for something more luxurious can opt for truffle pierogies in decadent caviar beurre blanc sauce.

Momo House, 6121 Hillcroft: While Nepali momos may look similar to Chinese dumplings, the similarities stop there. Momo House offers a wide range of these plump dumplings, where you can enjoy a bowl of water buffalo jhol momos in a fragrant and nutty spiced tomato and sesame based curry broth, or maybe kick things up with some pan-fried chicken chili momos, where the crisp skins are coated in a spicy and slightly sweet tomato sauce, making way for the gently seasoned filling inside.

Shiv Sagar, 6662 Southwest Freeway: When you’re in a city that’s blessed with a plethora of choices for great Indian food, it’s hard to pick just one place for samosas, but you can’t go wrong when ordering at this casual-vegetarian, counter-service spot off the freeway. Fried until golden crisp with an intensely spiced potato-based filling, these samosas are perfect to snack on while you wait for your other dishes to arrive.

Emporio Brazilian Grill, 12288 Westheimer: While Brazilian steakhouses may be plentiful around the city, places that serve other traditional fare are surprisingly scarce. This restaurant/market hybrid serves up classic Brazilian favorites, including coxinhas (chicken croquettes). A seasoned chicken filling is enveloped in a savory dough that’s molded into teardrop shapes before being deep-fried into a golden bite that’s easy to enjoy with your hands. At Emporio Brazilian Grill, coxinhas can be ordered individually on the side with your entrée or as a full order of eight.

Mala Sichuan, multiple locations: Don’t let the scarlet hue of the red oil dumplings scare you away. They’re not nearly as spicy as they look, and the sauce is a slightly sweet and nutty concoction that you’ll want to pick up in a generous swipe across the bowl as you bite into each handmade dumpling. The red chili oil brings in warmth rather than a blazing heat, making it entirely too easy to down an entire bowl in one sitting.

The Original Marini’s Empanada House, 10001 Westheimer: You don’t stay in business for decades unless you’ve done something right, and this empanada powerhouse has been cranking out an extensive array of empanadas since the ’70s. Start with the beef gaucho empanada, filled with spiced ground beef, chopped hard-boiled egg, onion and olives before navigating the rest of the menu, maybe making it an end-to-end empanada meal by finishing off with a guava empanada for dessert.

Nancy’s Hustle, 2704 Polk Street A: For a modern American approach to dumplings, this local favorite brings its own stellar iteration to the table, literally. The spicy beef and butter dumplings are served over a bed of sauerkraut, all in a tangy yogurt sauce with fresh dill scattered on top. The yogurt offsets the richness of the dumplings, with the dill giving an extra herbaceous dimension to these addictive bites.

Cool Runnings, 8270 West Bellfort: This homey, Caribbean hotspot serves up classic island fare. In the realm of piquant snacks encased in dough, spring for the Jamaican meat patties. These handheld pockets are baked in a flaky crust and filled with your choice of spiced meats or veggies, with the beef pattie in particular being a fan favorite.

Giacomo’s Cibo e Vino, 3215 Westheimer: In the Italian corner of the great dumpling debate, we won’t accept anything other than handmade. Luckily for us, this fun, casual, Italian spot has an entire section on the menu dedicated to housemade egg pastas. The tortelli di bietola half-moon ravioli are standouts, arriving at your table as pillowy stuffed crescents filled with swiss chard and ricotta and goat cheeses, all in a decadent butter sauce with hints of sharpness of sage to coat each bite.

Kenny & Ziggy’s, 1743 Post Oak Boulevard: Those looking for the culinary equivalent of a warm hug will find it in a bowl of chicken soup with kreplach, or triangular-shaped, filled dumplings with deep meaning in Jewish mysticism. This long-running deli (now in a newer location) stuffs its kreplach with seasoned brisket. The dumplings can also be ordered fried and arrive topped with a pile of crispy fried onions and with sour cream and apple sauce on the side for your dipping pleasure.

When she isn’t daydreaming about her next travel destination, Cindy likes to crochet, mix her own cocktails at home, and torment everyone with dad jokes that are so bad they’re good. Otherwise you’ll most likely find her getting cozy with a flat white or a glass of whiskey at a favorite local haunt!