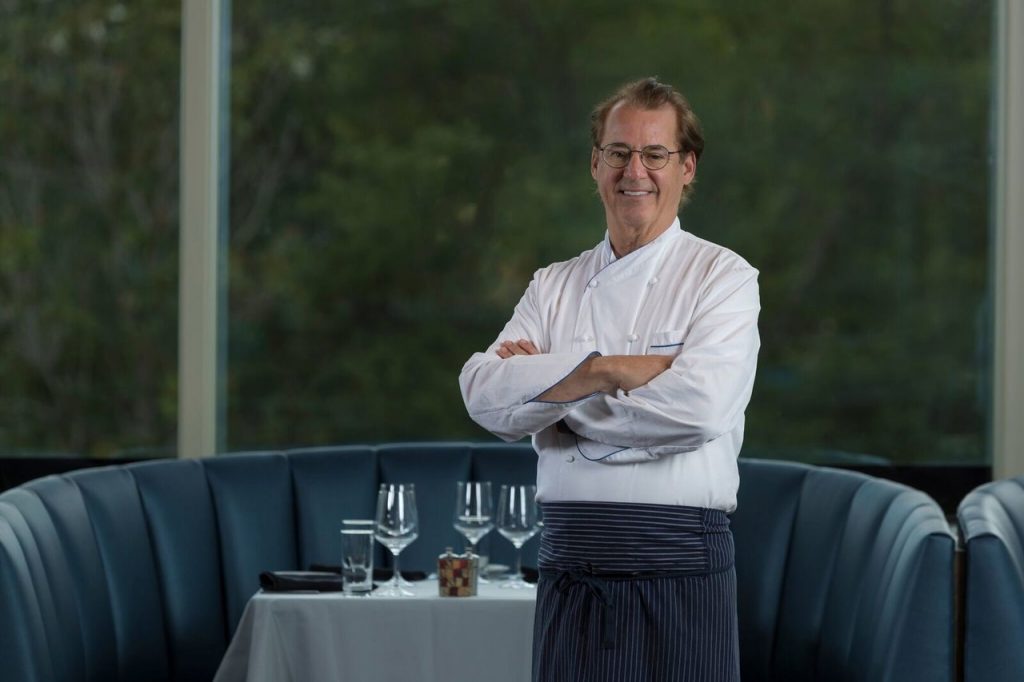 Robert Del Grande helms the menu at the newly opened Diana in the Hobby Center for the Performing Arts. He drew inspiration for the menu from New York theater district restaurants and supper clubs. Photo by Trevor Gerland.

Diana American Grill opened quietly on September 11 inside the Hobby Center for the Performing Arts. It takes over the space vacated earlier this year by Artista. Spectrum Concessions and Catering is behind the new space and chef Robert Del Grande (Cafe Annie and The Grove) is lending his signature style to the menu. The restaurant is named for the wife of the former Texas Lieutenant Governor William P. Hobby Jr. for whom, in turn, the Hobby Center is named.

“When Spectrum called and asked me if I could help with the restaurant, I thought, that’s an interesting idea,” said Del Grande. “I’ve always liked that whole theater district vibe in New York: clubby but casual, a lot of Italian-American influence and the kind of place where you can talk and laugh and eat great food.”

As Del Grande was picturing what a menu would look like, he said he was drawn to the idea of short-order cooks slinging out different orders in beloved diners. “The idea of grill rooms is that kind of quick pace, only with an emphasis on quality ingredients,” he said. “You know, something like steak and fries was always good, is still good and will always be good.”

For Diana, Del Grande created a menu that emphasizes high-end ingredients that are simply prepared and light enough that diners don’t feel they are having a big, heavy meal and then sitting through a musical completely stuffed.

On a hosted visit on September 13, we had an array of his offerings. From the menu’s “For the Table” section of shared dips and appetizers came the Texas Pimento Cheese with sharp cheddar and smoked paprika.  “One thing I’ve learned about Texans is that they love their pimento cheese,” said Del Grande. The dish has a dusky, smoky flavor and big texture. The cheese is super creamy. It is accompanied by crispy, airy, housemade crackers and a dish that’s easy to enjoy.

The Texas Gulf Crab Cocktail arrived with plump crab meat swirled around a tangy rémoulade sauce. On the other side of the spectrum, the cucumber and parsley salad is light and bright. The fresh herbs and crisp vegetables make a pleasing combination and is balanced by earthy Stilton cheese. The accompanying savory Marcona almonds add an element of sass. “With the cucumber salad, I was looking for a take on the classic iceberg wedge,” said Del Grande.

Another salad option is the roasted red pepper with mozzarella, wherein the red peppers are paper-thin and slightly sweet, which perfectly sets off the creamy ooziness of the cheese. Pine nuts give the dish a punch of texture.

Fish, pasta and meat dishes line the menu’s Main Course section and by the looks of them, everyone from the pickiest of eaters to die-hard carnivores should find something to their liking. We went with the veal chop with mushroom and tomato ragù, which is served with buttered rigatoni and fried capers. The chop is massive with a tender, almost buttery texture. It’s the kind of thing you can linger over and the portion is more than large enough to share. The rigatoni was a bit cold but we chalk that up to opening-week inconsistency rather than a standing issue. The salty capers bring zing to the hearty dish and it’s a safe bet that it is going to be a popular offering.

The Gulf red snapper was perfectly grilled with hints of butter and olive oil. It arrives topped with rich crab sauce laced with subtle floral tones of saffron. Overall, it is a grand expression of Gulf-meets-Mediterranean flavors.

The bar offers a range of supper club-style cocktails, including a take on the Manhattan called the Pre-Show. The wine list is extensive and emphasizes New World selections. The Murietta’s Well “The Spur” is a lush, bramble-laden, fruit-forward delight and a terrific accompaniment to the veal. We sent back a Negroni cocktail that wasn’t quite proportional and its replacement was still long on gin and short on Campari. Odds that behind-the-bar staff are still on a learning curve but it did raise eyebrows as that’s an easy-to-make classic cocktail that a supper club should turn out flawlessly.

Those quibbles are small compared to the overall experience. The interior has been completely redone with Artista’s former bright white giving way to a darker palette of deep blue, grey and black that somehow doesn’t feel dim or hemmed in. Decidedly cosmopolitan — with the prices to match — Diana should be a welcome addition to the downtown dining scene.

“Dinner is not the show,” said Del Grande. “The show should be the show.” Diners who experience Diana might beg to differ.