Move Over, White Claw: This Austin Company Has Made “Skinny” Spritzers Since 2016 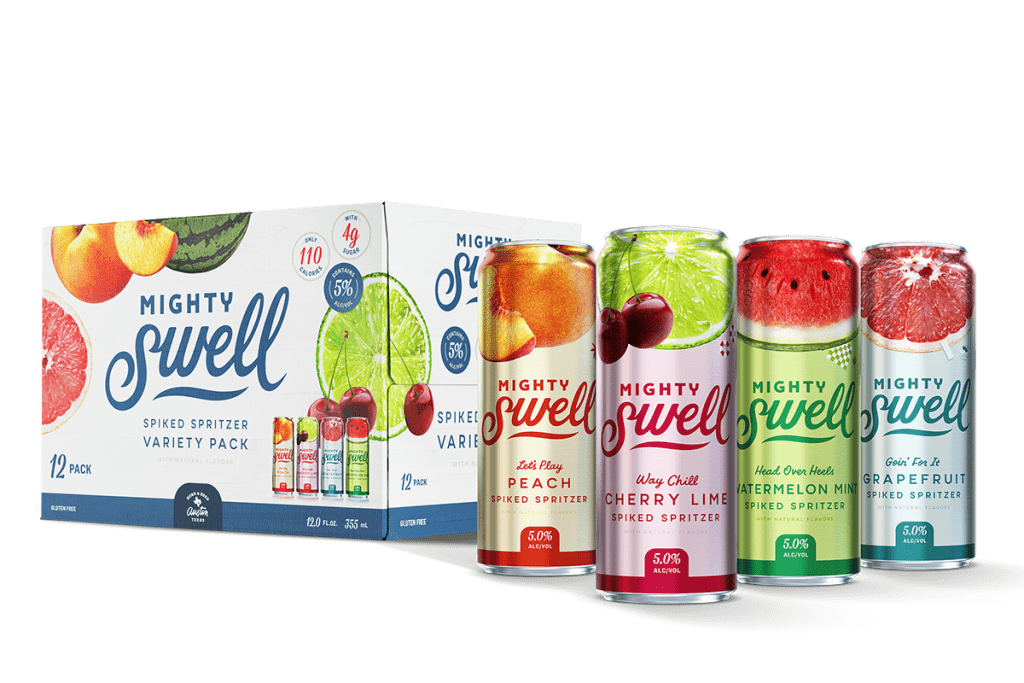 Mighty Swell in Austin is aiming for a share of the growing low-calorie, ready-to-drink alcoholic beverage market. Photo courtesy of Mighty Swell.

The retail alcoholic drink trend of the summer of 2019 is low-calorie, easily portable, light cocktails. White Claw, a “hard seltzer” from Chicago-based Mark Anthony Brands, the same company that makes Mike’s Hard Lemonade, has received a lot of attention from the media lately, but there’s some competition from Texas to consider.

Mighty Swell is an Austin company formed in 2016 by entrepreneurs Sean Cusack, Clayton Christopher of Deep Eddy Vodka and Daniel Barnes of Treaty Oak Brewing and Distilling Company. The trio’s goal was to create a drink made with natural ingredients that was easy to throw into a cooler and had a laid-back vibe to match Austin’s reputation. The results are a handful of fruity Mighty Swell cocktails in cans: grapefruit, watermelon mint, peach and the newest flavor, cherry lime. There’s no high-fructose corn syrup, artificial sweeteners, added sugars or artificial flavors. Individual flavors come in six-packs at a suggested retail of $9.99 while a 12-can variety pack with all four flavors is $15.99.

The 5% alcohol content comes from a base referred to as “sugar brew” in the beverage industry. Thanks to being gluten-free, low-calorie, low cost to produce and relatively neutral in flavor, it’s led to a boom in ready-to-drink alcoholic beverages. The Mighty Swell drinks only have 110 calories each. Because yeast consume the sugar used in the base, only four grams of it is left behind in the final product. The 12-ounce aluminum cans mean these skinny (in more ways than one) drinks can go where glass can’t, such as to pools, beaches or parks where alcohol is allowed. (Check before you go; there are fewer and fewer public places where that is acceptable these days.)

For those who want to amp up the booze factor, Mighty Swell has a webpage of recipes. It’s kind of like Bartending for Dummies. For example, to make the Porch Swing Peach, add one ounce of bourbon to the Peach flavor spritzer. For a low-sugar Paloma-ish cocktail, add an ounce of tequila and a lime wedge to three ounces of the Grapefruit spritzer. We’d totally use the Grapefruit for a cheater Salty Dog, too. (With the peppy cans, fruity flavors and recipe suggestions, it’s impossible to not see a parallel with another fruit-flavored, low-calorie beverage: La Croix, the bubbly hipster water that’s not as cool as it once was.)

Of course, the real question is: how do the Mighty Swell drinks taste? The company sent samples so we could answer that question for ourselves. One initial fear was that these would end up being 2019 parallels to the cloying wine coolers of the ‘80s. Thankfully, that is nowhere near the case. In fact, these are rather dry. The Cherry Lime is practically austere and could actually stand to be a bit sweeter. It’s a closer relative to a sugarless, cherry-infused Sprite with a lime wedge squeezed into it than a homespun cherry limeade.

The grapefruit and peach were by far the flavor champions. The latter smelled so much like a real peach you could almost feel the fuzz. The flavor is close to a white or slightly unripe yellow peach. The grapefruit smells like white pith and grapefruit oil but the taste is much more fruity.

Are these new drinks as good as a handcrafted cocktail from a quality bar? Not unless you’ve got a really incompetent bartender. However, if you’re heading to the hills for a day in the sun, the Mighty Swell drinks are friendly companions. To find these at a local retailer, check out the handy map that’s searchable by zip code.

Buy caviar and gourmet food online in Houston, Texas at DR Delicacy. We are a leading supplier of caviar, foie gras, truffles and truffle products, salmon, mushrooms, seafood, and Meat.
4    View on Facebook

Houston Food Finder updated their status.23 hours ago
When this happens, it's usually because the owner only shared it with a small group of people, changed who can see it or it's been deleted.
1    View on Facebook