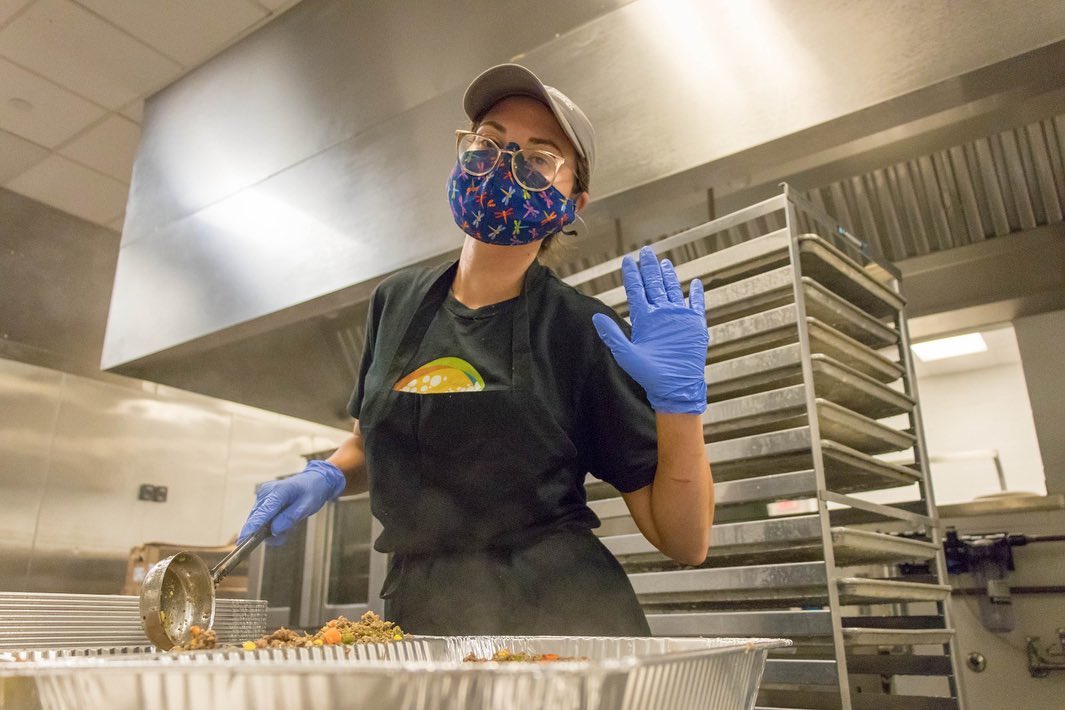 “We’ve been through Ike and every other hurricane but we never saw anything like this,” Sonya LeJeune of Lake Charles, Louisiana told me as she waited in line to pick up meals from a Walmart parking lot. There, World Central Kitchen (WCK) is handing out breakfast, lunch and dinner to anyone in need.

The nonprofit organization was founded by chef José Andres and is well-known for showing up with its mobile kitchen operations at the worst disaster sites in the world, starting with the Haiti earthquakes in 2010. In addition to feeding Hurricane Laura victims, currently the organization also has a presence in California, providing meals to those displaced by wildfires, and in Beirut helping those who survived the massive ammonium nitrate explosion. They have also fed millions of people who are out of work due to the COVID-19 pandemic. In addition, WCK also helps restaurants stay in business with Restaurants for the People, a program that purchases meals from struggling restaurants and gives them to those in need.

The windshield of the otherwise-pristine truck LeJeune that is riding in is smashed inward from hurricane debris. LeJune has no electricity, no water and no gas, but at least she has a roof over her head. In the back seat is her neighbor, who lost everything. LeJeune said if it weren’t for WCK’s meals, she’d have no idea where, what or how they would eat today.

She is not alone. As many as 465,000 people are without power and probably won’t get it back for five weeks or more. Louisiana Senator John Kennedy said the “path of destruction reaches about 400 miles, affecting between 1 million to 2 million people.”

Saturday, I drove to Beaumont to help WCK prep meals at a local elementary school. I sliced four hotel pans’ worth of red onions, minced a gallon of garlic by hand and helped slice a speed rack full of Polish sausage. We made jambalaya, shepherd’s pie and pasta Bolognese for victims and first responders along the Texas-Louisiana border. The work would have been repetitive and boring if it weren’t for the energy in the kitchen. Nick Cave was playing over Bluetooth as chef Danielle McGinnis from New Orleans kept the pace as the lead chef. Once, I had my own restaurant and have worked in the industry for years, but it’s been months since I’ve yelled “heard” to anyone. It felt good.

Updated, 9/2/2020, 10:45 a.m.: According to volunteer chef Mark Matsusaki, the Beaumont kitchen is now closed and WCK is focusing its resources on Lake Charles.

You won’t find any microgreens or baby zucchinis on WCK’s rescue kitchen menu, but attention to detail is present. We garnished jambalaya with freshly chopped parsley, green onions and fried onions. It wasn’t bland institutional food. It was massively scaled comfort food.

The kitchen in Beaumont had no burners, no flat-top, no Robot-Coupe food processor and no automatic dishwasher, but we made it work with a tilt skillet and ovens. Across the Texas-Louisiana border, two additional WCK mobile kitchens are feeding thousands of people in Lake Charles.

The volunteers I met in Beaumont were teachers, non-profit owners, housewives and teenagers. There was only one other chef volunteer, and he is also a Houstonian. Mark Matsusaki is currently out of work due to the COVID-19 pandemic. Normally, he would be the kind of positive and knowledgeable chef restaurant owners would be clamoring to hire. Now, he’s considering a career in truck driving.

An important note for prospective volunteers: hotels in the Lake Charles and Beaumont areas are booked for miles. I opted to drive home on Saturday and return the next day.

It would have been easy to overlook the extent of Hurricane Laura’s destruction if I’d stayed in Texas, but on Sunday I drove into Louisiana — further into the storm’s path.  The closer I got to Lake Charles, the more twisted metal, snapped trees and downed power lines I saw. Street lights on the bridge over Lake Charles are folded over, the lamps touching the ground. Metal barricades that normally keep drivers off the medians were crumpled like wads of paper. Buckled highway signage had collapsed onto homes and businesses.

I felt lucky to be driving during the day given my cruddy vision — but what about all the people stuck here? It was 92 degrees in Lake Charles that day, and most people had no power or air conditioning.

To respond to the overwhelming need in Lake Charles, WCK has added seven more kitchens. That means it needs more volunteers — and there are other ways to help, too. If you are a chef, consider lending some of your time and talent to WCK. Monetary donations are also needed and can be made at the World Central Kitchen website.

Other non-profit organizations helping in the area that also need support can be found online.

In addition to being a restaurant industry professional, Mark Matsusaki is also a developer who has regularly supported the Houston Food Finder website with his talents and knowledge. He was instrumental in developing the map of Houston restaurants offering to-go and delivery after the first government-ordered shut-down in March. We are proud of Staci and Mark taking their time to volunteer and help Hurricane Laura victims. Thanks also to Staci for sharing her first-person account. — Phaedra Cook

Houston Food Finder10 minutes ago
In this week's newsletter edition: Italian restaurant in Memorial/Energy Corridor area to relocate, where to find crawfish this year and more food news.

Houston Food Finder2 days ago
The Halal Guys opens its first downtown Houston location on March 2 with a special ribbon cutting ceremony. Guests can look forward to the chain's popular fast-casual Middle Eastern fare such as gyros and eggplant hummus, and dine within a new space design unlike anything else the company has so far unveiled. Phaedra Cook shares more details below.

Houston Food Finder with Nirmanz Food Boutique.3 days ago
Nirmanz Food Boutique in Sugar Land is open and ready to serve the Indian comfort food you’re craving! Socially distanced dine-in, delivery and takeout are all available. Try the Indian Dinner Box with samosas, one each of chicken, lamb and vegetable curries, lentils, naan, onion salad and dessert for $30 for two people or $60 for four. Or, enjoy the vegetarian version, which swaps in three vegetable curries instead for $25.99 for two or $50 for four. It's a terrific meal deal and a great way to explore some of our customer favorites. Call (832) 532-0699 to order or visit https://www.nirmanz.com/ to see all of the dishes. Tell them Houston Food Finder sent you!

Houston Food Finder4 days ago
INDUSTRY CLASSIFIEDS: This could be a great solution for restaurant owners who need more hands on-deck and who want to cultivate the next generation of industry professionals.
https://houstonfoodfinder.com/classifieds/show-ad/?id=32284

Restaurant Interns Seek On-the-Job Training; Cost is Covered!
The H. A. Y. Center, a program of Harris County Resources for Children and Adults, seeks placement of up to 60 interns to get on-the-job experience at Houston-area restaurants. Internships should last from six to eight weeks and up to 32 hours per week. The intern pay rate of $8.50 an hour is alread...
houstonfoodfinder.com
2    View on Facebook

Houston Food Finder4 days ago
The COVID-19 pandemic has inspired all sorts of adaptations for restaurants. The approach for B.B. Italia is a change of space in order to more properly accommodate the current needs of guests. Phaedra Cook has the latest on the move and how to get your favorite dishes while waiting for the doors to reopen.

Italian Restaurant in Memorial is Temporarily Closed & Relocating - Houston Food Finder
B.B. Italia owner Benjamin Berg is moving the restaurant to a "more suitable home", but is keeping it in the Memorial & Energy Corridor area.
houstonfoodfinder.com
4    View on Facebook