With Oxheart Closing Next Spring, New Chapters Begin For Its Principals 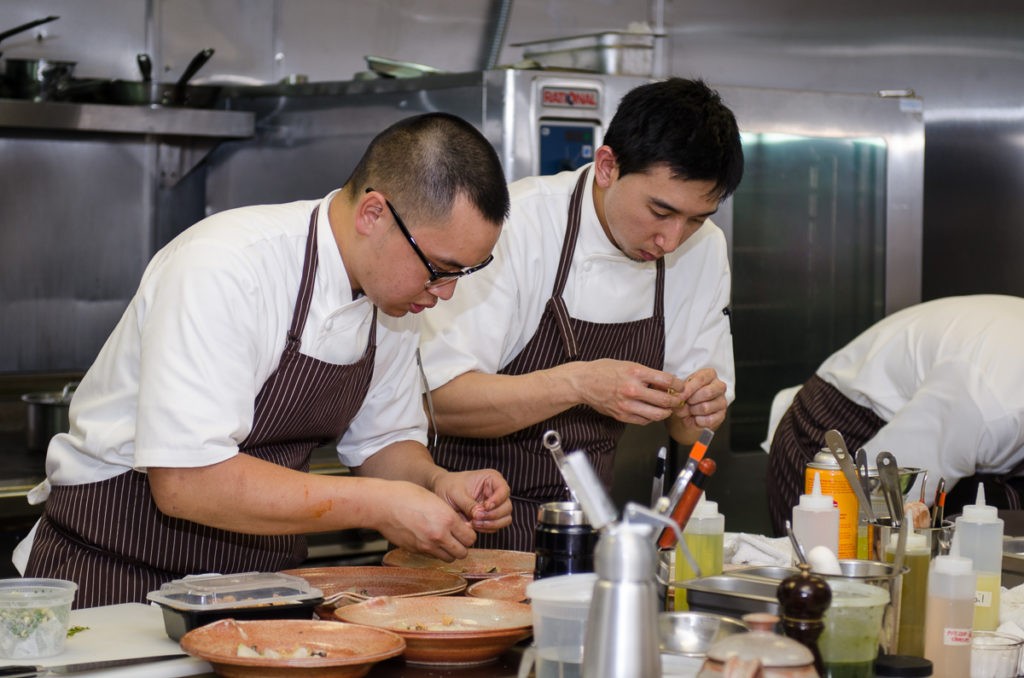 Food writers and diners across Houston—and probably across the United States—are reeling at the news that Oxheart is closing after service on March 15. It will be converted to a la carte service under Yu’s right-hand man, Jason White, and will reopen in May. (White was Justin Basye’s replacement when that chef left short-lived Museum Park Café.)

It’s all the more shocking because its chef, Justin Yu, was honored with the James Beard Best Chef Southwest award earlier this year. Oxheart is as popular as it ever was and the plates are still just as impressive.

Yu, however, is not the first chef to decide to end a successful restaurant concept on a high note. “A lot of people have turned in their Michelin stars. The one that stands out is [French chef] Olivier Roellinger. Earlier this year, Gerard Craft in Saint Louis announced he was closing Niche and, like us, not because it was doing poorly but for more ambitious endeavors,” said Yu.

Oxheart was never easy. In fact, at times it was downright unlikely, which is even more of a testament to the work of founders Yu and Karen Man, as well as sommelier Justin Vann (who now helms Public Services Wine & Whisky, where Yu and Man oversee the food program.)

It was financed on a shoestring budget by several small investors: people who simply believed in the team’s talent. Yu, Man and Vann put a great deal of sweat equity, too. The end result was a mere 31-seat restaurant located on the outskirts of downtown, far from any sort of glamorous setting or restaurant row. The multicourse menu and meticulous attention to service meant that on any given night, very few tables would be “turned.”

“The biggest challenge was exceeding expectations,” said Yu. “I feel as if we kind of started behind the eight ball. We were in an area that wasn’t super well-known. There was no liquor and no espresso machine. The new place will make so much more sense here.”

“More than anything, I know Oxheart as the wine list I have cared for more than any other I’ve had the privilege of writing from the ground up,” reminisced Vann. “It has always been my most intellectually satisfying outlet, and I’m really excited for the changes that are coming. I haven’t worked the floor in years but everyone there is family to me.”

Yu says that closing Oxheart will free him up to focus on the food programs of both Public Services and the previously-announced concept he’s working on with Bobby Heugel and Steve Flippo (of Anvil Bar & Refuge) that will be located at 544 Yale in The Heights. His plan is to work nights at the new concept in the Oxheart space and spend his mornings at the Yale restaurant.

Don’t, however, think for a moment that the new restaurant going into the soon-to-be-former Oxheart space is Oxheart’s replacement. Yu has bigger dreams now and these center on “something that is just as ambitious, but more approachable.”

“There will still be vegetables, but honestly I can cook meat well, too,” he joked. “It will be a place you can come to twice a month rather than twice a year.”

Man has been working on plans of her own and shared a hint of what is to come via text message. “Oxheart taught me more than what I would have learned in a lifetime without it. Though it’s hard to say farewell to such an amazing chapter, I’m also ready to embark on some new adventures. Over the past year, I’ve challenged myself to explore other creative outlets and I can’t wait to share the results,” she wrote.

Diners who want one last taste of Oxheart should visit the web site for instructions on how to best go about it. For more of Yu’s musings on this big development, take a look at the letter he posted on his blog.

Disclaimer: Author is one of the small investors who helped get Oxheart off the ground—and could not be more proud of what has been accomplished there.