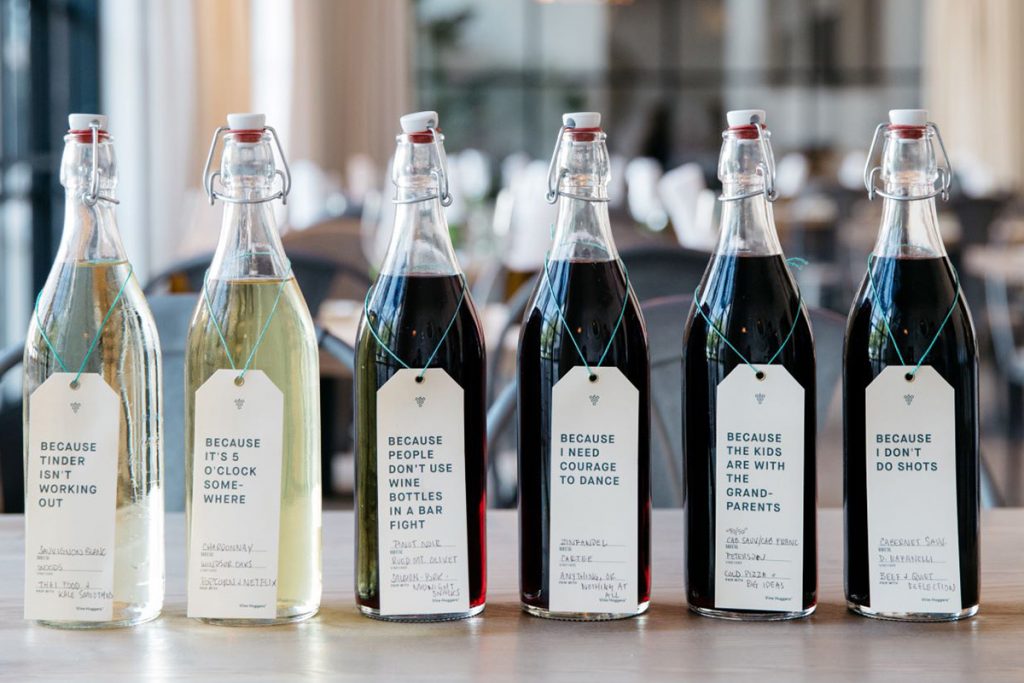 Bottles of wine poured from the taps at a Sixty Vines location. Photo courtesy of Sixty Vines.

After years of growth in craft cocktails and craft beer, it seems that there’s a new wine boom going on in Houston. Hot on the heels of the openings of a second Postino Winecafe in Montrose, Montrose Cheese & Wine and La Grande Ru in the Heights comes Sixty Vines in Rice Village. The Napa Valley-inspired restaurant with locations in Plano and Dallas is opening on Monday, October 14. It’s a sizable space — with 8,700 square feet encompassing two stories — that was previously Bambou night club, and The Gatsby Social Club before that. Right out of the gate, Sixty Vines is serving lunch, dinner and weekend brunch. Half of the opening day proceeds are being donated to Young Audiences, Inc. of Houston, a nonprofit organization that supports arts in education.

Sixty Vines offers over 100 wines by the glass and, remarkably, over half are on tap. These can also be served in glass carafes with the wine producer and pairing suggestions written on amusing hangtags, such as “Because Tinder Isn’t Working Out” and “Because I Don’t Do Shots.” Seven additional taps pour beers, cider or cold brew coffee.

The company describes its dishes as “simple” and the food offerings include Wood-Fired Cauliflower, Crispy Zucchini, salumi and cheese boards (all examples of the now-ubiquitous “sharable plates”). Entrées include Asian Chicken Chop Salad, The C.A.B. Burger and the chive-rubbed, lemon-roasted half-chicken. There are also pasta dishes, such as the Tonnarelli made with coconut and cilantro-infused noodles and topped with Gulf shrimp, spinach and basil, and a selection of wood oven-fired pizzas.

Unique to the Houston location is The Sonoma Room. Located on the first floor and evocative of a wine cellar, it has its own special menu of shared plates, specialty cheeses, sandwiches and desserts. The main dining room features views of the open kitchen and a charcuterie bar. Other seating options are the greenhouse patio, aka the wine garden experience, or one of the multiple private dining rooms.

All of the Sixty Vines location features art by a local artist, and in this case Houston-based artist Christopher Vela was tapped to depict “his artistic representation of the story of wine, from seed to glass.”

More information can be had on the Sixty Vines Houston webpage.

Houston Food Finder with DR Delicacy.19 hours ago
Charm your family or guests with a charcuterie board featuring high-quality artisan foods from DR Delicacy! Choose from salami in flavors like Peri Peri Duck, Moroccan Venison and French Black Truffle, imported hams and Spanish Chorizo. There are savory snacks, too, such as buttery, crispy Truffle Chips, crunchy cornichons, a slew of condiments, Texas honey, chocolate truffles and more! The Houston-based importer of fine local and international fare has everything you need to create an impressive spread. Visit the warehouse at 4120 Directors Row Suite A to shop in person, or order the full assortment online at https://drdelicacy.com/.