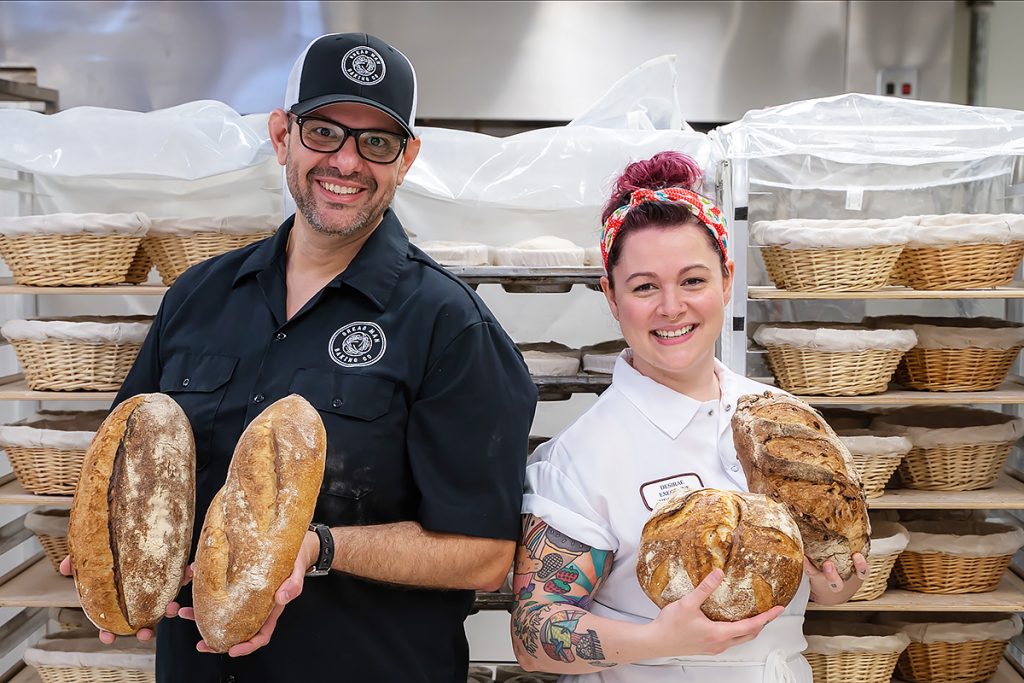 Other than at the Urban Harvest Farmers Market on Saturdays and the Westchase District Farmers Market on Thursdays, this marks the first time that consumers can directly buy Bread Man Baking Co.’s offerings. Normally, the company sells to over 35 restaurant clients, including top restaurants such as One Fifth Mediterranean, Georgia James, Eunice, Killen’s STQ, Nobie’s, The Dunlavy, Revival Market, Indianola, The Original Ninfa’s on Navigation and Bosscat Kitchen & Libations.

Tasos Katsaounis owns Bread Man Baking Co. and the head baker is Desirae Vasquez. To say the company’s growth is meteoric isn’t an overstatement. It’s only operated for about six months. Some of the quick popularity can be credited to the baking skills Katsaounis learned from his mother as a child, some to his grandmother’s recipes, which his mother learned growing up in Greece — and some to Instagram.

After working as a business consultant to the oil and gas industry for 22 years, Katsaounis returned to the baking he’d learned as a child as a hobby. He’d been posting photos of his home-baked breads to Instagram and Facebook for about six or so weeks when a meeting request came in from The Westin Houston Downtown that changed his life.

“They asked me to bring samples to the hotel. I explained that while I was flattered, I wasn’t a bakery or even a business entity,” he said. He took the samples to The Westin anyway and met with the food and beverage director and executive chef.

“They are trying my samples and the food and beverage director starts explaining invoicing terms and how they operate. I politely interrupted him and said, ‘Again, I’m super flattered and honored that you’d even consider my breads for your hotel, but as a reminder, I’m not a bakery nor do I have a company. I’m just a home baker who enjoys making my family’s recipes,” said Katsaounis.

The hotel left the door open for him to return once he had a business set up and, after a discussion with his wife, morning radio personality Roula Christie of the Roula & Ryan Show on KRBE 104.1 FM, Katsaounis decided to set up Bread Man Baking Co.

“We started looking for a commercial commissary where I could rent space on an as-needed basis so I could provide breads to The Westin,” said Katsaounis. “I was working full time during the day and baking at night for the hotel. It just snowballed from there and to this day, The Westin is still a customer.”

He makes his breads with Barton Spring Mills flour, a Texas product. Some of the offerings that he’s very proud of are the ones that reflect his heritage, such as the Greek Village bread. “It’s naturally leavened, so a sourdough starter, if you will. It has a bit of olive oil and my grandmother would put a touch of whole wheat in it,” he said. “The other one that my yia-yia used to make is an olive loaf, with Kalamata olives that she used to hand-pit — imagine pitting all those olives — and oregano that grows wild in our village. You could literally pick it on the side of the road.” (“Yia-yia” is Greek for grandmother.)

Katsaounis works with an importer to get the Kalamata olives, olive oil and oregano from Greece in order to get as close as possible to his grandmother’s original recipe. “Helen Greek Food & Wine and Helen in the Heights purchase the Greek Village and the Kalamata Olive bread from us. It’s the only breads they carry other than pita. My grandmother’s two breads are on those tables and I think that’s awesome,” he said.

At the farmers markets, customers have a more diverse selection to choose from since the full range of the company’s bread and pastries can be sold there. These include Cranberry Walnut bread, Strawberry Fields Focaccia (made with strawberries, feta, basil, and balsamic reduction), croissants, cookies, pain au chocolate and brioche cinnamon rolls with a unique cereal-infused milk frosting.

Early customers included his son’s preschool teacher. “She was the first person to buy a loaf of bread from me, ever. I insisted on giving it to her and she insisted on paying for it. She said, ‘No, no, I understand what it takes to make bread. You need to charge me for this.’ So, I threw out an arbitrary number of $8.50 and she didn’t balk.”

A funny thing happened, though. People didn’t want to deal with the 50 cents needed for exact change or felt like they were inconveniencing Katsaounis. “They gave me 10 bucks per loaf and said keep the change. So, the price went up and no one questioned it,” he said. Ultimately, though, he dropped the price at the farmers markets and all of his breads are either $7 or $8 now. The lesson learned: charge whole dollars when people are paying with cash.

Of course, with the addition of the Whole Foods stores, many Houstonians can now find Bread Man Baking Co’s artisan loaves in their own neighborhoods all week long.

Houston Food Finder13 hours ago
ICYMI: The Bayou City has no shortage of cool and creamy treats and Jeni's Splendid Ice Creams has added even more to the delightful mix with a second location in H-Town. Try Brown Butter Almond Brittle, the new Buttercream Birthday Cake, limited edition Wedding Cake and the dairy-free Dark Chocolate Truffle at the NEW CITYCENTRE shop. Click below for more details!

Houston Food Finder19 hours ago
ICYMI: Thanks to new restaurants that have emerged east of downtown Houston over the past few years, there are more nice patios to dine on as well. Our list offers a nice introduction to must-visit spots!

Houston Food Finder1 day ago
ICYMI: There are just a few more days to enjoy Latin Restaurant Weeks in Houston! Learn more about who is participating and they dishes they are serving via the link below. There are more than 50 restaurants to choose with selections that include Mexican, barbecue, Colombian, Cuban, El Salvadoran, Tex-Mex and Venezuelan-Japanese fusion.

One of the biggest names in whisky is debuting a lighter, sweeter offering perfect for Houston's hot summers.
View on Facebook

Houston Food Finder2 days ago
ICYMI: The Underbelly Hospitality roster continues to grow with new concepts hitting the scene this summer, like the forthcoming Underbelly Burger. Menu highlights include local ingredients and creative twists on classic favorites. Learn more from Phaedra Cook below!

Chris Shepherd's Underbelly Hospitality is adding a burger joint this summer to the Houston Farmers Market.
1    View on Facebook

Find a favorite day and drink to it. That’s especially good advice considering every day of the year has some food or drink it’s honoring. Monday, June 14, however, is one of the best. That’s because it’s National Bourbon Day, the only liquor in the world that has to be made in America to be...
1    View on Facebook