Where to Find Great Biscuits in Houston 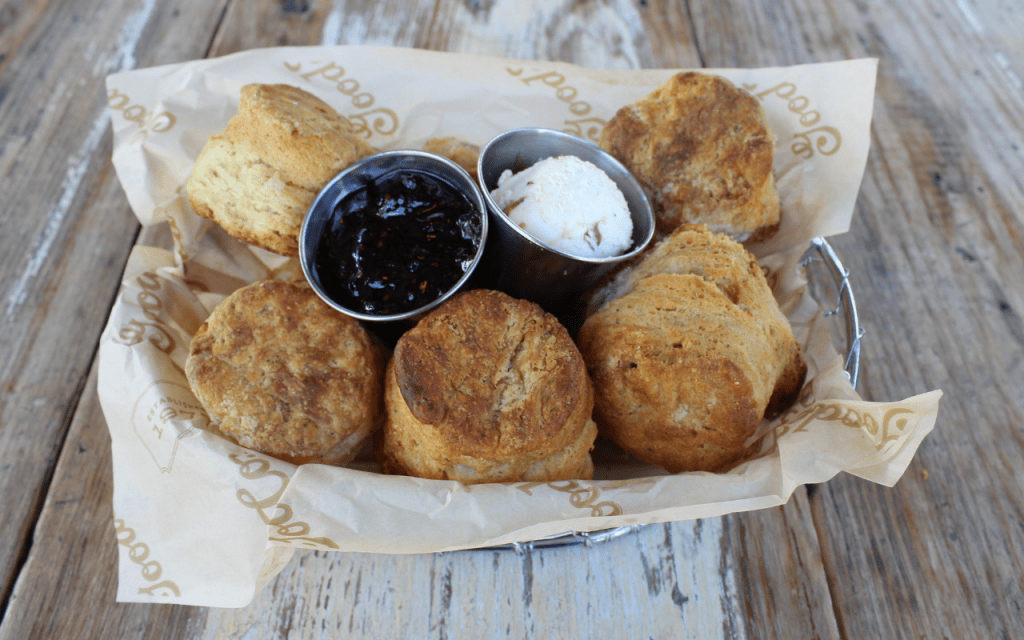 Whether topped with rich cream gravy, hugging slabs of salty country ham, oozing with butter and honey or heaped in a basket, biscuits are a frequent breakfast companion. However, these buttery rounds of fat and flour are so flexible that they can be a comforting addition at any mealtime. Biscuits are so treasured that cooks carefully preserve the index cards, newspaper clippings and cookbooks handed down from generations with the “perfect” biscuit recipe while bakers compare notes on what exactly makes for a great biscuit. Whether the interiors are fluffy like clouds or separate into feather-like layers, there are many exemplary examples of this humble bread available every day at Houston restaurants.

Homestyle Biscuits at Goode Company Armadillo Palace, 5015 Kirby: Cast iron cooking and Texan heritage are the inspirations for this traditional biscuit recipe that originated at the Goode Family Ranch. It was introduced to the Goode’s Houston hangout, Armadillo Palace, in April 2017. The ingredients include all-purpose flour, baking powder, whole butter, salt, pepper and buttermilk. The dough is folded, layered and cut for a final size of two inches in diameter and height. The biscuits are baked fresh year-round for the Back Porch Bread Basket, which also includes cornbread, dinner rolls, housemade seasonal jam and Shiner beer-shallot butter. Call Armadillo Palace at (713) 526-9700 in advance to place to-go orders for parties and holiday dinners.

Buttermilk Biscuits and Cheddar-Chive Biscuits at Backstreet Cafe, 1103 South Shepherd: Relaxation meets refinement at this River Oaks restaurant that’s been serving buttermilk biscuits and Cheddar-Chive Biscuits since the early ‘90s. Each is prepared with a mix of all-purpose and cake flour, butter and buttermilk, then brushed with melted butter during and after baking. The Cheddar-Chive also includes cornmeal, green onions, chipotle pepper, cheddar and Asiago cheeses. The buttermilk version is available as a side and served in a cast iron pan with jam, marmalade and butter. Entrées featuring these include the Backstreet Benedict with Cheddar-Chive Biscuits, aged Virginia ham, Hollandaise, grits, asparagus; and Fried Chicken And Biscuits with two poached eggs, creamy jalapeño sauce and red pepper grits. Whether served alone or as part of an entrée, the biscuits are only available during brunch.

Filipino Biscuits & Gravy at Bar Boheme, 307 Fairview: In the United States, traditional biscuits and gravy typically arrive under a thick blanket of gravy studded with pork sausage. At Bar Boheme in Montrose though, chef Rishi Singh (who’s back after a few years at Batanga) makes an Asian spin by replacing pork with Filipino longanisa sausage. “Using Filipino sausage with its unique sweetness and garlicky flavor is a departure from the classic recipe, and definitely makes it a special and memorable dish,” says Singh. He uses fresh sage and cream in the gravy, ladles it over a split jalapeño cheddar cheese biscuit and finishes with chives. The biscuits are two-and-a-half inches wide and one inch tall, which makes  for a hearty brunch entree.

Chicken Biscuits at Dish Society, multiple locations: In this hefty breakfast and brunch plate, buttermilk biscuits are loaded down with a six-ounce, cage-free chicken breast. The chicken is brined in a marinade of garlic, onion powder, black pepper and white wine before being dredged in buttermilk, coated in seasoned flour and deep fried. To make the biscuits, the kitchen blends cold butter, buttermilk and heavy cream with flour and then folds the dough four times using an “envelope” method before cutting with a 3-inch ring mold. Thick and hearty pepper-flecked cream gravy is the final flourish. The biscuits are also available as part of the Brisket ’n Eggs plate, the Sausage, Ham or Bacon, Egg + Cheese Biscuit sandwich or as a side order.

Big Nasty Biscuit at Harold’s, 350 West 19th: This charming southern spot in the Heights boasts a bevy of flavorful dishes during brunch, including the Big Nasty Biscuit. The colorful name is because the classic, five-ounce buttermilk biscuit is loaded with tender, deep-fried boneless chicken breast, white cheddar cheese, rich sausage cream gravy and crisp green onions. It’s a Harold’s classic that’s been on the menu since 2013 and combines some of owner Alli Jarrett’s beloved childhood favorites: fried chicken and biscuits and gravy. The biscuits are available by the batch to-go; call the restaurant for details. Advance notice is required.

Truffle Honey Biscuits at Killen’s STQ, 2231 South Voss: Executive chef Teddy Lopez uses a biscuit recipe passed down from his grandmother as the foundation for a slightly fancier rendition. The two-ounce, two-inch wide biscuits are made with all-purpose flour, frozen unsalted butter, buttermilk, salt, sugar and baking powder. When the kitchen receives a biscuit order, the staff brush the rounds of dough with milk and melted butter, then sprinkle on smoked sea salt. Once out of the oven, the piping-hot biscuits are finished with a generous sweep of black truffle honey and immediately sent to diners’ tables.

Scallion Biscuits at Ouisie’s Table, 3939 San Felipe: To this day, Ouisie’s Table serves the same earthy biscuits as its original, former location, which opened on Sunset Boulevard in 1973. The recipe is from owner Eloise Adams Jones’ personal collection. Today, the savory, petite rounds — only one-inch across — are part of the complimentary bread selection offered at the start of the meal. Aside from the namesake scallions, other biscuit ingredients include white cheddar cheese, whipping cream, baking powder, sugar, salt and flour. The result is a lightly textured yet rich outcome. The biscuits are available for special orders and in bulk to-go; with advance notice the scallions can be swapped out for other fresh herbs such as rosemary or thyme. The size increases to two inches for the Rise’n Shine Ouisie’s 2 biscuits with pepper milk gravy. For this dish, the biscuits are sliced open, slathered with butter and topped with hot gravy.

Butter Biscuits at State of Grace, 3258 Westheimer: Buttery, melt-in-your-mouth biscuits are served two ways at this River Oaks restaurant specializing in global-southern fare. The Butter Biscuit & Ham is a sweet and savory option prepared with shaved country ham and seasonal jam. Also on the brunch menu is the Chicken Fried Chicken plate: chicken fried chicken and a biscuit with two sunny-side eggs alongside sausage gravy. To make the two-inch by two-inch biscuits, executive chef Bobby Matos says, “We try to add as much butter into the dough as possible, so much so that we have to freeze the dough after we cut it and before we cook the biscuits, in order for the dough to keep its shape. We cook the biscuits straight from the freezer to keep them in a perfect square.”

Rosemary & Honey Biscuits and Cheddar Jalapeño Biscuits at The Kitchen at The Dunlavy, 3422 Allen Parkway: This casually elegant retreat amongst the trees of Buffalo Bayou Park near downtown offers both sweet and savory variations on this essential morning bread. The Cheddar Jalapeño has a savory-spicy bite from cheddar cheese, jalapeños, roasted garlic and cream cheese. On the sweeter side, a generous amount of honey is drizzled on the Rosemary & Honey Biscuits, which come with a rosemary garnish and housemade honey butter alongside. Both are brushed with butter before and after baking for a rich finish and a representative for the restaurant says these been a huge hit since the restaurant opened in 2015.

Brunch Biscuits at Rainbow Lodge, 2011 Ella: These fluffy and flavorful buttermilk biscuits are complimentary during Sunday brunch service. Although executive chef Mark Schmidt says the origin is “just a good ‘ole southern biscuit recipe,” they pack a lot of flavor thanks to butter, sharp cheddar cheese, green onions and a post-bake brush of garlic butter. We like to pair them with the Fried Texas Quail Bites on white cheddar grits with bourbon-bacon gravy or the Creole Poached Eggs with white corn grits, Andouille sausage and spicy tomato Creole sauce.