Well-Regarded Chef Now Has His Own Downtown Houston Restaurant 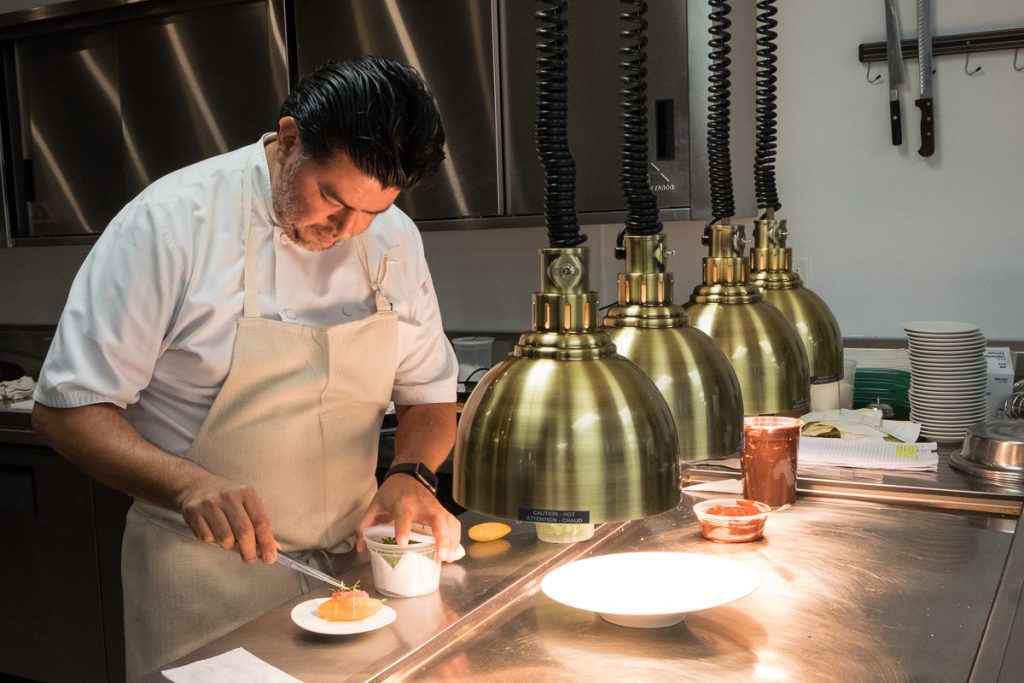 Over the past 15 years, chef José Hernandez has built a storied career in Houston. High points include wowing diners with meticulous, beautiful desserts at Triniti; being the opening chef for La Balance and Radio Milano; and, most recently, overseeing all culinary operations at Hotel Alessandra, including in-hotel restaurant Lucienne. The hotel closed in January 2021. As of this past February, Hernandez gained more control over his future, as he quietly took ownership of Brasserie du Parc. The restaurant, located at 1440 Lamar at One Park Place in downtown Houston, was formerly owned by chef Philippe Verpiand and Monica Bui of Etoíle in Uptown Park.

Why the quiet transition? “I wasn’t ready to talk to the media about it until I made some changes,” said Hernandez. One thing that won’t change is the name; Hernandez plans to keep it. Additionally, he wants to maintain an easygoing environment while offering fine-dining-level dishes. “It’s casual,” he said. “We have a beautiful view of Discovery Green. The corner of the building where we are is a great location.”

According to a statement by Verpiand, he’d invited Hernandez to be part of Brasserie du Parc when it first opened. “When we first began planning to open Brasserie du Parc in 2016, four years after we opened Etoile, we went to José to ask him to be our chef there. We were already fans of his talent and food and thought he would be a perfect fit for the new restaurant. He was, however, happy with his executive chef position at the time and had to say no,” said Verpiand.

However, with Hotel Alessandra closed, and Verpiand and Bui caring for an ailing family member, the time was right for Hernandez to step in. He left a short-lived role as culinary director of Berg Hospitality, and bought Brasserie du Parc. “We worked with him to make the transition go smoothly, and now I think everyone is very happy with the results,” added Verpiand.

Hernandez says that diners who have visited his prior restaurants can expect the same beautifully plated dishes; an approach that draws upon a combination of classical French training and ingredient selections based on flavor and seasonality. For example, his deceptively simple tuna tartare melds French, Mexican and Japanese influences by including wasabi-soy sauce, avocado and seaweed. His lobster salad features generous, butter-poached hunks of the namesake crustacean atop mixed garden lettuce, grapefruit, avocado and tomato, all dressed in citrus vinaigrette.

There are, of course, French standards, including escargot in garlic butter, onion soup with crostini and gruyere and steak frites (featuring an eight-ounce flatiron steak with fries and spring mix salad).

While there’s overlap in the dishes Verpiand served and what Hernandez is serving now, the latter says he’s bringing his own style and perspective. “People like the way I do beef Bourguignon, so that’s one dish where I’ve changed the presentation and flavors,” says Hernandez. His version includes pearl onions, carrots and pancetta doused in red wine sauce and served over mashed potatoes.

Other dishes steer toward the whimsical, such as seared foie gras presented as a slider enlivened with caramelized onions, tomato confit, quail egg and red wine reduction; and milk chocolate mousse, presented as a space-age orb with a frilly tail of shaved chocolate layered with almond dacquoise on a “landing pad” of nougatine.

Hopefully, Hernandez’s acquisition of the Brasserie du Parc lease means he’ll enter  another extended career phase, the results of which both he and diners will enjoy.