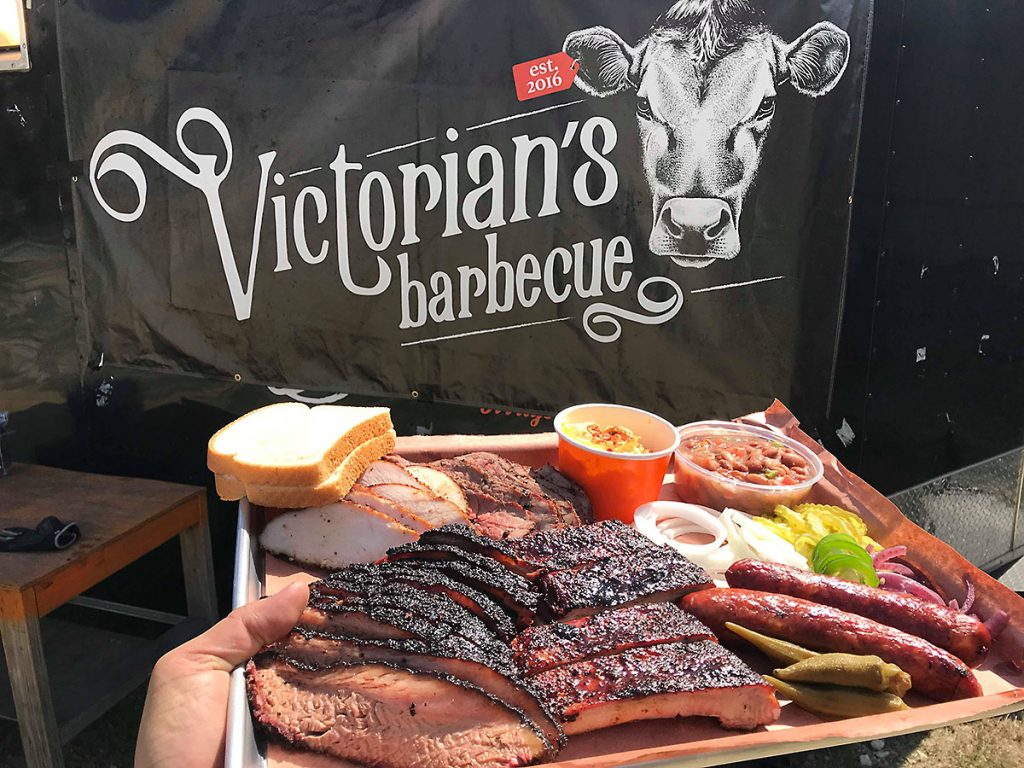 A platter of "Texas trinity"—sausage, ribs and brisket—with sides from Victorian's Barbecue. Photo by Joey Victorian.

A barbecue business currently in the Heights is making the jump to a permanent location east of downtown Houston the beginning of next year. Joey Victorian, pitmaster and owner of Victorian’s Barbecue, made the announcement at the 2018 Houston Barbecue Festival (and on social media) on Sunday, April 15. The planned location is a 1,500 square foot building to be constructed at 19 North York between Canal and Commerce streets.

Right now—and for some time to come—the Victorian’s Barbecue trailer is at 1114 West 18th in the Heights and runs Thursday through Saturday from 11 a.m. until sold out (usually no later than 4 p.m.). He is looking at adding a barbecue sandwich day on Wednesdays as well.

Victorian says he was spurred to find a permanent location after a rental rate hike on the lot where he’s parked. “We may as well be in a brick-and-mortar if we’re going to pay this much to be on a piece of land,” he said. “Our business is growing. In order to grow with it and do more catering, have more storage and hire more employees, we’re going to have to have a brick-and-mortar to do so.

At the new place, patrons are going to be able to watch meat get sliced on-demand behind a cafeteria-style serving area. Garage doors on the side will open to give access to a crushed granite patio. Some additional tables are going to be inside in case the weather is bad. Victorian plans to move his trailer there while the building is under construction, then repurpose it for serving desserts. A shipping container will serve as an outside bar.

That’s still some time away. Victorian’s target opening date is January 1, 2019. However, in the meantime he’s hoping to have some pop-ups at the new address. There are dead pecan trees that need to be removed there. Of course, Victorian is repurposing them as wood for the smoker, so pecan-smoked meats in the future are a certainty.

Victorian was born and raised in Houston as part of a “family of cooks.” His parents were from Louisiana and often visited extended family there. It was a convivial community that regularly threw crawfish boils and made big pots of gumbo. “My mom said, ‘You may grow up broke but you’re never going to be hungry. You’re going to learn how to cook and you’re going to learn how to eat.’ I took that to heart. It’s really hard for me to cook for two people. I have 52 cousins on my mom’s side alone.”

He started cooking in Austin barbecue competitions in 2005 before opening a seasoning company in 2014 with his wife, Kelli. He managed to get his seasoning blends (at the time called “Dirrty Swamp”) placed for retail sale at Kroger and H-E-B. Eventually, they pulled out of that arrangement. Victorian says the margins just weren’t enough—but they did make enough money to get a barbecue trailer. (He now sells the seasonings himself under the Victorian’s Barbecue brand name.)

The first spot he parked the trailer at was an Ace Hardware off of Jones Road near Cypress. It was there that J.C. Reid, barbecue columnist for the Houston Chronicle and a founder of the Houston Barbecue Festival, paid him a visit. “That’s when I discovered there was a huge barbecue culture in Houston. I just had to be part of it,” said Victorian. Reid says that at the time of his visit he was consulting on the Woodlands Barbecue Festival and scouting participants. Victorian received an invitation soon after Reid tried his barbecue.

With the proliferation of new Houston barbecue joints in recent years, it’s an upward climb for pitmasters to stand out. One of the ways Victorian has tried to do this by offering a cut of beef popular in California but rarely seen in Houston: the tri-tip. “In California, they just grill it,” says Victorian. “They rarely smoke it because it dries out. We’ve come up with a technique on our big pit that lets us get a lot of smoke and sear on the outside while still keeping it medium to medium rare on the inside. We start with the best [beef], too; we get all of our tri-tip from 44 Farms.” At the 2018 Houston Barbecue Festival, Victorian served it sliced and topped with chimichurri—inspiration from Argentina and Brazil, in this case.

Victorian considers his Texas-style brisket another specialty. His popular sides include spicy corn with Creole seasoning and charro beans with leftover brisket mixed in. “We have a lot of people who say, ‘Just make me something.’ I take a big bowl of beans, top it off with some brisket and cheese, onions, whatever—and they’ll eat up the bowl just like that. You get all the stuff you love in one bite.”

He’s grateful for the diverse group of diners in Houston who embrace deviations from traditional Texas barbecue. “There’s just so much culture, art and different people. The different cultures I grew up with influences my food. Going to Brazilian steakhouses is where the chimichurri idea came from. All of the seasoning blends that I use is all Louisiana-influenced. That’s my family’s background. The steak and brisket—that’s a Texas thing. I’m glad that we’re not limited or bound by any one thing. I think that’s how my restaurant is going to grow.”