Where to Watch Super Bowl 2020 in Houston 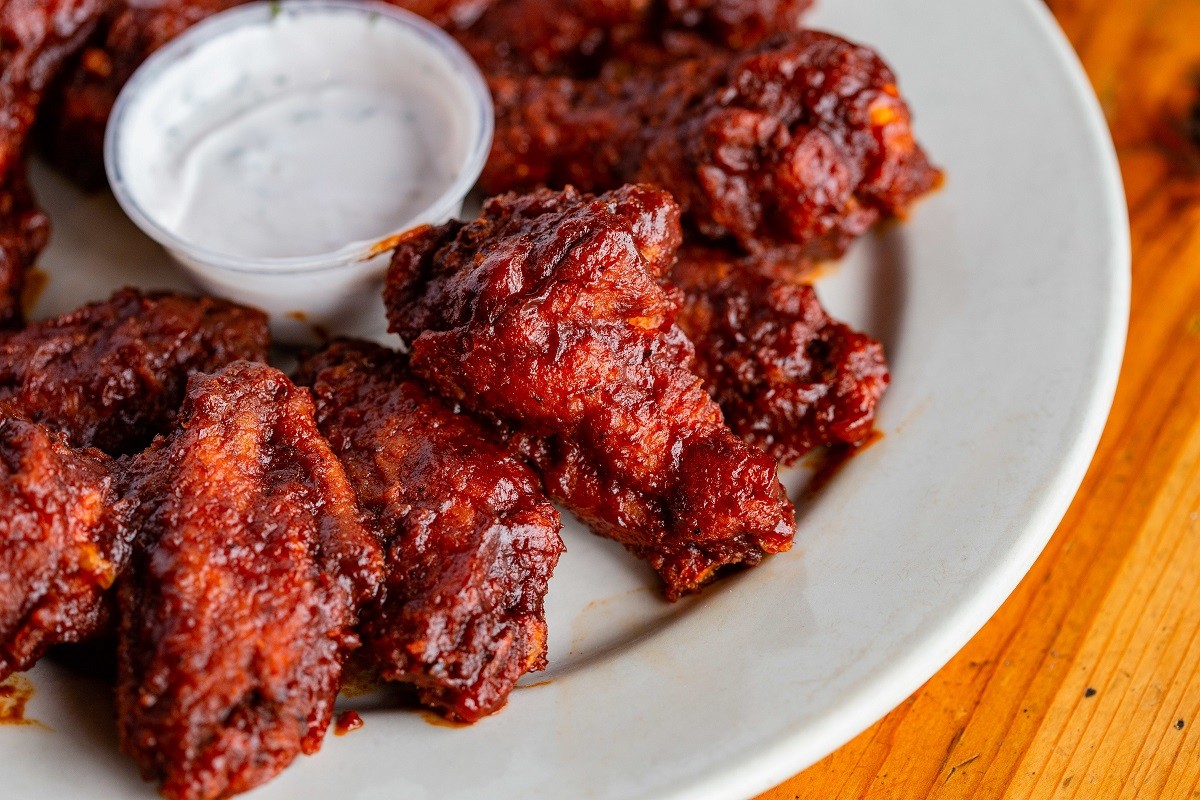 The winning call at Jax is 25% off all wings. Photo courtesy of Jax Bar and Grill.

Super Bowl Sunday is almost here — a day dedicated to football, drink specials and nacho-cheese-covered-everything. Frankly, between the Texans blowing a commanding 24-point playoff lead against the Chiefs and the Astros’ sign-stealing scandal, we don’t blame readers for not giving a darn about the big day. Regardless, Houston bars and restaurants are offering specials. Obviously, it’s to remind us that we’ve already won Super Bowl LIV, because Tom Brady and the Patriots won’t be anywhere near the field. Sunday’s game between the Kansas City Chiefs and the San Francisco 49ers kicks off Sunday, February 2 at 5:30 p.m, and the parties and specials are going strong all day long.

Are we feeling better now? Good. On to the specials!

8th Wonder Brewery, 2202 Dallas: This EaDo brewery is hosting its annual “Wonder Bowl” party featuring the $11 WonderBurger — a burger and waffle fries that comes with a beer token. The game is being shown on a 14-foot projector screen outside, as well as on all the flat screen TVs in the taproom. Just looking to pregame? All 32-ounce crowlers are only $8, so stock up on your favorite suds at a discount.

Bosscat Kitchen & Libations, 4310 Westheimer: Bosscat may be known for whiskey, but $5 beers are the go-to for the big game. Bosscat is showing the Super Bowl on eight screens throughout the venue. There are also private rooms available to rent if you’d like to throw a party for your friends.

Eight Row Flint, 1039 Yale: This Heights bar is known for whiskey, beer and tacos but did you know about its annual Super Bowl potluck? This is the 4th year for this annual event, so bring your favorite dish and enjoy the game with a smorgasbord of different foods. The on-site food truck is also open and serving its full menu in case patrons crave any favorite staples.

FM Kitchen and Bar, 1112 Shepherd: Crawfish season at FM Kitchen doesn’t officially start until February 8th, but Super Sunday requires a super sneak peek at what’s to come. With the purchase of any six-pack cooler (bucket of beer), guests get three pounds of crawfish on the house. Beer coolers are $22 for domestic bottles and $28 for craft bottles. This is a sweet deal without the crawfish, but throw in the mudbugs and FM wins our Lombardi Trophy for best game-day special.

Jax Grill, 1613 Shepherd: It’s happy hour all day on Sundays at Jax, which is also featuring 25 percent off all chicken wings and fajita platter specials.

Johnny’s Gold Brick, 2518 Yale: This Heights cocktail dive is once again teaming up with Kaiser Lashkari from Himalaya Restaurant and offering a free buffet during the game. Johnny’s also changes its cocktail menu every month, so be sure to try the brand-new drinks.

Lucky’s Pub, 801 Saint Emanuel: This is always a fantastic party destination. This EaDo sports mecca will have plenty of drink specials, crawfish and shrimp by the pound, football bingo and Super Bowl squares. Parents beware: this party is strictly 21 and up.

The Original Ninfa’s, 2704 Navigation and 1700 Post Oak: It’s never too early for a margarita, and the famous Ninfarita will be on special for $7 per glass or $20 per pitcher.

Pitch 25, 2120 Walker: What says let’s have a good time more than “100 beers on tap”? That’s what we thought. This downtown destination has an indoor soccer pitch, but don’t be surprised if a flag football game breaks out during Sunday’s big show. Pitch 25 will be airing the game with sound on all of its screens and will have a DJ in the house for before and after entertainment. More info is available on its event Facebook page.

For many, Super Bowl Sunday is day filled with great food and entertainment. After all, an estimated 16 million people call in sick to work the following Monday, according to a change.org petition. If you have a bit too much fun, please use a designated driver or ride share service.

Houston Food Finder with Pearland Convention & Visitors Bureau.18 hours ago
Pearland's restaurant scene has grown by leaps and bounds over the past several years — and the drink scene has grown right alongside. Find out where to get great coffee, bubble tea and craft beer in the link below!

Houston Food Finder with Roma Ristorante.18 hours ago
Embark on an Italian adventure with Roma Ristorante during the Under a Sicilian Sun virtual wine dinner on March 4! This week's event also features special guest Melissa Muller, author of Sicily: The Cookbook. Each three-course meal is $119 per couple and $85 for individuals — and that cost includes 𝗧𝗛𝗥𝗘𝗘 bottles of wine. Pairings include Feudo Montoni: 𝟮𝟬𝟭𝟵 𝗚𝗿𝗶𝗹𝗹𝗼 (served with Eggplant Parmigiana Roulade), 𝟮𝟬𝟭𝟵 𝗥𝗼𝘀𝗲 𝗱𝗶 𝗔𝗱𝗲𝗹𝗲 (served with Busiate, a Sicilian semolina pasta with a traditional tomato, basil and almond pesto) and 𝟮𝟬𝟭𝟴 𝗡𝗲𝗿𝗼 𝗱’𝗔𝘃𝗼𝗹𝗮 𝗟𝗮𝗴𝗻𝘂𝘀𝗮 (served with classic breaded and grilled pork loin with Caciocavallo cheese). Pick up from 5 to 7 p.m. on March 4; the Zoom virtual experience starts at 7:30 p.m. To reserve, email Jeremy Parzen at jparzen@gmail.com. For more information visit the event website: https://romahouston.com/2021/03/01/under-a-sicilian-sun-virtual-wine-dinner-3-4/