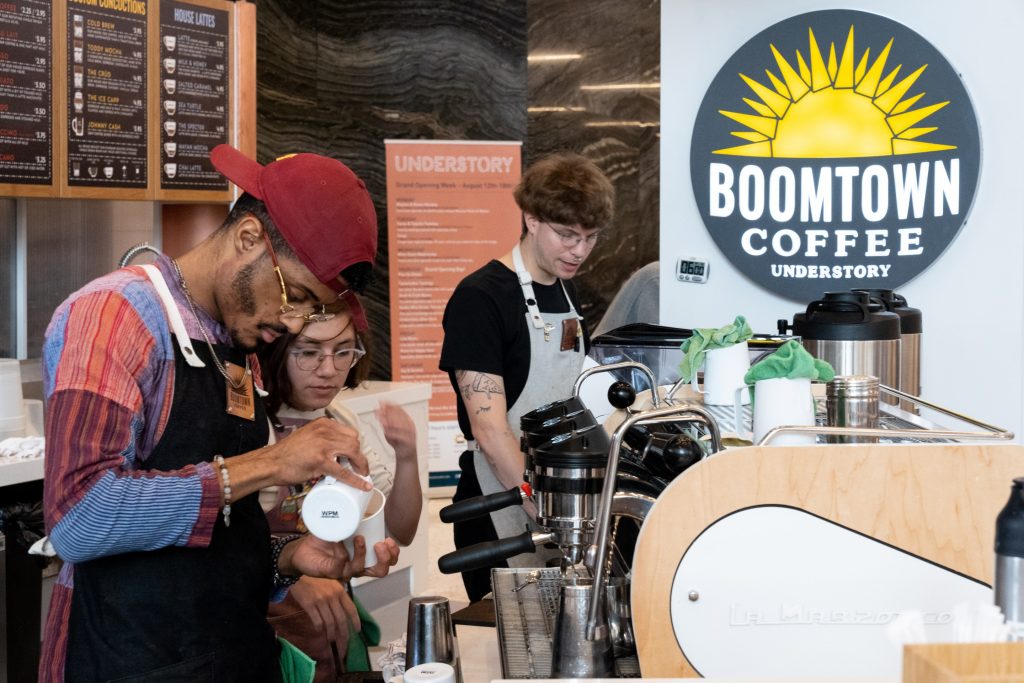 Understory, a contemporary food hall and gathering space at the base of Bank of America Tower at 700 Louisiana in downtown Houston, officially opened on August 18. The massive commerce station developed by Stockholm-based Skanska, which also own the 35-story tower it’s seated under, has seen consistent crowds during its first week of business.

The space is designed by renown Austin-based architecture firm Michael Hsu Office of Architecture. Created as a multi-use communing space, Understory is more than a food and beverage hall. In fact, 20,000 of it’s total 35,000 square feet are devoted to public spaces like the eye-catching “Great Steps” pictured above. Named after the space existing between the upper forest canopy and the underbrush, the vibrant hall is an intentional transition point between downtown’s streets and buildings and the tunnels below. It is the only space in the city with five separate access points to the underground pedestrian tunnels.

Despite it’s beautiful architecture, an ocean of natural light and stunning art installations, what makes Understory teem with life and energy is the food court. It’s what draws thousands of downtown office workers, pedestrians and tourists each day. The vendors is a diverse group of local and out-of-town concepts already successful in their own right.

Tacos y Tortas is the second The Original Ninfa’s on Navigation restaurant expansion by Legacy Restaurants, which purchased the historic restaurant in 2006. The sprawling Atrium is alive with the smell of food and coffee. Despite the veritable cocktail of sounds and smells, nothing overpowers the intoxicating aroma of carne asada emanating from the Tacos y Tortas stand. With a lunch line that infringes on its neighbors’ territories, it seems to be the early customer favorite. Boasting an entirely new menu designed by executive chef Alex Padilla, the casual, truck-inspired concept slings mouthwatering street tacos and new creations like the Cubano Torta pictured below. The casual street tacos and tortas stand joins fellow East-side restaurant Seaside Poke, which opened its second location in Understory.

With the largest vendor footprint in the space, Dallas-based East Hampton Sandwich Co. takes center stage — the second Houston-area opening for the fast growing craft-sandwich chain. (The first is in the River Oaks District shopping center.) The folks at East Hampton are kept just as busy at the ones staffing Tacos y Tortas, with sandwich orders flying out at lunch time like a New York deli. Tucked into the corner is Flip N’ Patties, the Filipino-inspired burger truck concept that last year opened its first brick-and-mortar in the Energy Corridor.

Mona, the fast-casual Italian concept by acclaimed French chef Sidney Degaine (formerly Cafe Azur) just outside of Katy, opened its second location in the communal food hall. Understory is also the site for the third iteration of local Houston roaster, Boomtown Coffee. Its counter at the entrance of the hall is often the busiest one during the day, with baristas working at breakneck speed to keep up with a constant but fast-moving line of customers.

With perhaps the most gorgeous footprint, the Silver Linings Bar — owned by Roveen “Ro” Abante and Florenico “Diko” Jopio III of Lincoln Bar on Washington — is as much a vendor as it is part of the space’s unique design. The minimalist, stand-alone oval is a lonely island in the middle of the open, communal space. It has something of a hotel lobby vibe, without the existential dread. While the booze business is understandably meager at lunch, the after-work happy hour crowd is quick to fill the stools around 4 p.m to sip on revamped classic cocktails developed by Robby Cook of wholesale distributor Southern Glazer’s Wine & Spirits (formerly owner of Barringer Bar, which closed in 2018), and Omar Villavivencio of Lincoln Bar.

The unveiling of this much-anticipated food hall is just the latest successful effort in the long-awaited beautification and functional transformation of downtown Houston. Though the tunnels have existed for decades, little has been done to make these appealing. Understory beautifully connects those tunnels to the street level and provides a stunning transition between the two. It it as accessible to the passing pedestrian as it is to the men and women who work one the floors above it.