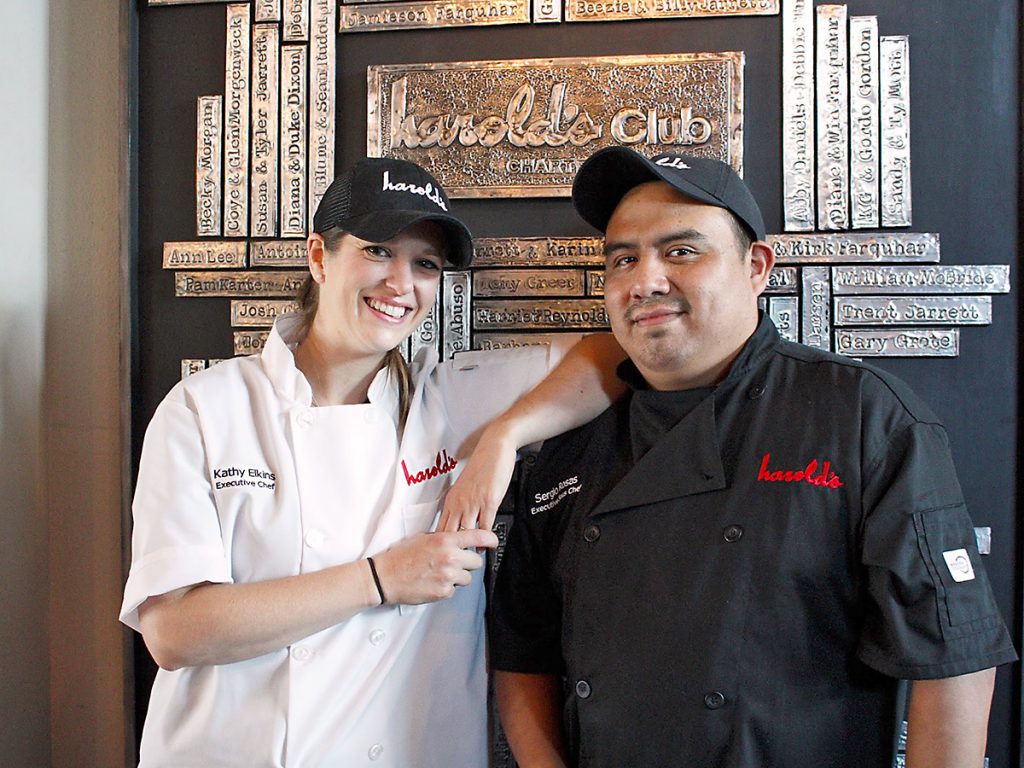 At first, it looked as if owner Alli Jarrett of Harold’s Restaurant & Tap Room at 350 West 18th in the Heights had found a replacement for former executive chef Antoine Ware in Richard Knight. Unfortunately, Knight, formerly of Feast and Hunky Dory, didn’t stay long, choosing instead to focus on family and marketing “Show Us Your Goods,” a potential television series. However, it hasn’t taken long for Jarrett to decide on his replacement. Sous chef Kathy Elkins has been promoted to executive chef while Sergio Rosas is now in the executive sous chef position.

A native Texan, Elkins helped open Giacomo Cibo e Vino and spent six years working for another female executive chef and owner, Lynette Hawkins. Elkins then worked for the gentleman whose shoes she just filled — Richard Knight — at Hunky Dory then did a stint at “barstaraunt” Better Luck Tomorrow.

Elkins may also be familiar to Houston diners as she has helped husband Wade run My Yard Reaction (“Maillard reaction,” get it?), a barbecue pop-up that’s appeared at events and bars like Axelrad and Johnny’s Gold Brick. These days, Wade works for fellow pitmaster Patrick Feges and his wife Erin at Feges BBQ in Greenway Plaza.

“Kathy carries on an important part of Harold’s culture and that is using farm-fresh ingredients. We are committed to providing our guests with delicious Southern Cuisine and utmost Southern Hospitality. I am also extremely excited to have a woman lead our culinary team as there are not enough women chefs leading the way in this great culinary city we are in, or the world for that matter,” said Jarrett via a press release.

Regarding newly promoted executive sous chef Rosas, Jarrett says that he has been with Harold’s almost four years. “He started as a line cook with us and was promoted about a year-and-a-half ago to sous chef. One of his key responsibilities is heading up our team at brunch, as he has been our main leader for weekend brunch for the last two years,” she said.

Soon, there will be a special opportunity for Elkins to showcase her work and for diners to get to know her better. On Wednesday, July 18, there’s a five-course dinner featuring ingredients from Whitehurst Heritage Farms. The menu is online and the cost is $85 per person. Cocktail pairings and a port paired with dessert are included.