The Hit List: New Houston Restaurants to Visit in September 2019 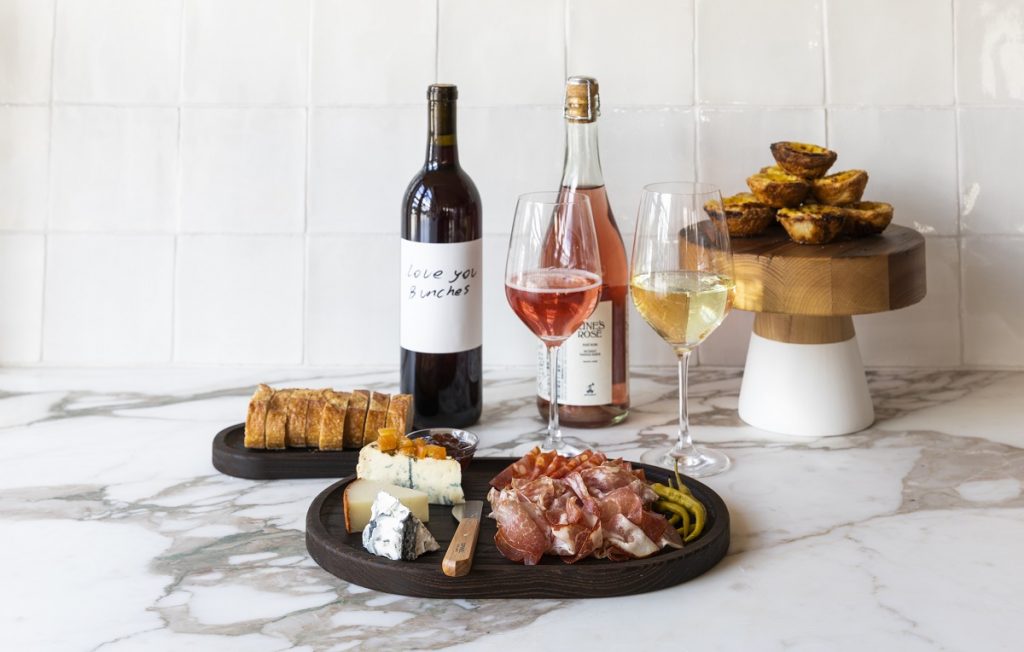 Wine and cheese lovers have the perfect spot thanks to Montrose Cheese & Wine. Photo by Julie Soefer.

As we head into fall (really, Houston’s version of “summer lite”), the restaurant scene continues to add new and interesting places to dine. This month’s Hit List welcomes some especially intriguing additions, including must-try newcomer Rosie Cannonball from the Goodnight Hospitality team, a new venture from the team behind local favorite Nobie’s, and Chris Shepherd’s latest incarnation of One Fifth.

A new addition this month is the Gaggenau Concept Kitchen (currently called STAGE as in stagiaire, which is French for “trainee”), which features a rotating roster of guest chefs. There are also three bars serving drinks to compliment the food: Bravery Wine Bar by Shepard Ross, Lockwood Station by David Daquiri and Secret Garden by Jonathan Gallardo. That’s a lot of talent under one roof, so you’ll want to visit more than once. For more, read Olivia Flores Alvarez’s full article on Bravery Hall’s opening.

Food highlights on the regular menu include Black Currant Honey Chicken Wings and Crispy Smoked Potatoes made with crescenza (an Italian cow’s milk cheese), black garlic, chermoula and herbs. Lotti Dotti is open from 3 p.m. until 2 a.m. seven days a week, so late-night eaters (and, with their newly launched brunch brunch, daytime eaters), this patio’s for you.

One Fifth Gulf Coast, 1658 Westheimer: With only one iteration left in their five-year plan, Chris Shepherd and his team opened One Fifth Gulf Coast this past month. Chef de cuisine Matt Staph’s family has a house in Rockport, and culinary director Nick Fine and pastry director Victoria Dearmond both grew up on the coast, so the team has plenty of background for showing off the diversity of the region. Shellfish lovers can dine on standouts like the roasted oysters with Mama Shepherd’s smoked oyster dressing, blue crab fingers in caramelized fish sauce and New Orleans-style barbecue shrimp with poblanos and corn. From the Small Stuff section, the Steen’s Sugar Cane-Glazed Pork Belly, which Shepherd made famous at Catalan, and the fried shaved catfish with Prewitt’s pickled greens are solid choices. Those looking for some heartier fare can indulge in entrée sized plates such as the smoked pork, chicken and shrimp jambalaya for two and the Gulf catch of the day. Wine director Matthew Pridgen has curated a wine list that focuses on white and lighter reds and the cocktail menu by Underbelly Hospitality beverage director Westin Galleymore showcases playful drinks such as the Bend and Snap with tamarind-infused Wheatley vodka, Cappelletti Aperitivo, lemon and orange.

Penny Quarter, 1424 Westheimer: Penny Quarter, located in the former Etro space behind Anvil, debuted in August. After opening Squable, owners Justin Yu and Bobby Heugel, along with partners Steve Flippo, Terry Williams, wine director Justin Vann and coffee director Alex Negranza, focused on finishing Penny Quarter. Billed as an all-day cafe and bar, it is open daily from 7 a.m. to midnight Sunday through Wednesday, and until 2 a.m. Thursday through Saturday.

Food service started this month with 15 breakfast and lunch options that are created in an onsite food truck and available until 3 p.m. (Note that is the time when espresso drinks stop being available as well, but there’s always drip coffee.) Try the breakfast salad with hard boiled egg, marinated tomatoes, kale and sprouts or the fried chicken sandwich with sprouts and green zhug, a spicy chili sauce from Yemen. Dinner features 13 selections such as bistro steak with fried eggs, kale and salsa verde. Espresso drinks are available until 3 p.m. and Vann’s wine list is available all day, except Sundays, when wine service begins at noon.

Postino Wine Café, 805 Pacific: Phoenix-based Postino Wine Café opens its second Houston location this month in the former Montrose Mining Company on Pacific. With over 3,000 square feet of space, Postino’s latest outpost is almost twice the size of the Heights location and has seating for over 100 inside, an ample bar area and room for over 70 on the covered patio. Featuring the same menu as other locations, guests can dine on snacks such as crispy cauliflower, NYC Grilled Cheese and sweet potato wedges in addition to hearty cheese boards such as The Bounty and The Butcher’s Block. In addition to the regular menu, Postino also offers brunch on Saturdays and Sundays from 9 a.m. to 1 p.m. featuring dishes such as country toast with Italian ham, Gruyere, and sunny side up eggs and the B.E.L.T, a breakfast panini on ciabatta with sugar-cured smoked bacon, scrambled eggs, lettuce and tomato. Wine lovers should also note Postino’s happy hour, which offers selected wines by the glass for $5, is until 5 p.m. everyday.

Rosie Cannonball and Montrose Cheese & Wine, 1620 and 1618 Westheimer: Over the past few weeks, Goodnight Hospitality, the company that also operates honky-tonk Goodnight Charlie’s, has taken over the corner of Westheimer and Kuester. Goodnight partners David Keck, Felipe Riccio, Peter McCarthy, and June Rodil have opened both Montrose Cheese & Wine and restaurant Rosie Cannonball.  Rosie’s menu features ingredients that are locally sourced from Goodnight Hospitality’s farm in Bellville and dishes that are influenced by both Europe and the Napa Valley. Standouts on Felipe Riccio and Adam Garcia‘s menu include shareable, well-executed, vegetable-focused dishes such as charred brassica, roasted eggplant and grilled mushrooms. Also excellent are the pizzas and housemade pastas. Master sommeliers David Keck and June Rodil have curated an exceptional list of Italian, Spanish and French wines as well as house cocktails such the Safe Harbor Sour made with rye, charred grapefruit and lime. To learn more about Rosie Cannonball, read about our first visit.

Next door is Montrose Cheese & Wine. Occupying 800 square feet, the quaint space evokes a European atmosphere with white oak shelves and marble accented with custom-metal designs. The shop offers a constantly rotating menu of cheeses, pastries, assorted meats, marinated olives and a sandwich of the day. Plus, it features 10 wines by the glass in both 3- and 6-ounce pours.

Savoir, 1344 Yale: After a year of teases on Instagram, owner Brian Doke (formerly of Tiny Boxwood’s) opened Savoir opened last month at the corner of 14th and Yale in the Heights. Chef Micah Rideout (formerly of Potente and Reef) has crafted a menu that includes Ribeye Cruda with sunchoke crumble, sorrel, forest mushrooms and black garlic balsamic and Jasmine Tea-Smoked Yellowtail.  Those craving carbs might check out the pizzas and pastas, such as Lemongrass Capellini with sauce vierge (a French sauce made from olive oil, lemon juice, chopped tomato and chopped basil), citrus zest, green olives, crispy garlic and capers and the Cauliflower Gnocchi with jumbo lump crab. Meatier dishes include the catch of the day and the Brie Burger made with ground wagyu, brie, aioli, blistered tomatoes, charred red onion. Doke also owns the recently opened wine bar and retailer next door, La Grande Rue.

Toasted Coconut, 1617 Richmond: Chef Martin and Sara Stayer, and beverage director Sarah Troxell — the team behind the acclaimed Nobie’s — have opened tiki-inspired, Toasted Coconut.  While some might expect it to be a bar, it is a full-service restaurant with both shareable plates and full-sized entrées to dine on while sipping tropically inspired concoctions. Chef de cuisine Ben Ruiz offers dishes such as Eggplant in Vadouvan curry and marinated cucumber salad which really deliver on both taste and presentation — especially the spicy, crispy eggplant. Those in the mood for full-on dinner fare can enjoy the Whole Fish with Mala sauce (which can easily feed 2 people) and the Baja Style Mussels with guajillo and cilantro.

On the cocktail side, Troxell is debuting brand-new drinks such as the exquisitely boozy Sherry Sells Seashells By The Seashore with reposado tequila, manzanilla sherry, apricot and bitters, and The Seaward with Rhum J.M. blanc, coconut water, lime, mint and falernum.

Coming soon: Be on the lookout for Mike Tran’s Toukei, an izakaya-style restaurant on Clarewood near his many other restaurants; tasting menu restaurant March, also from the Goodnight Hospitality Team; and Musaafer at the Galleria.