The Hit List: New Houston Restaurants to Visit in July 2019 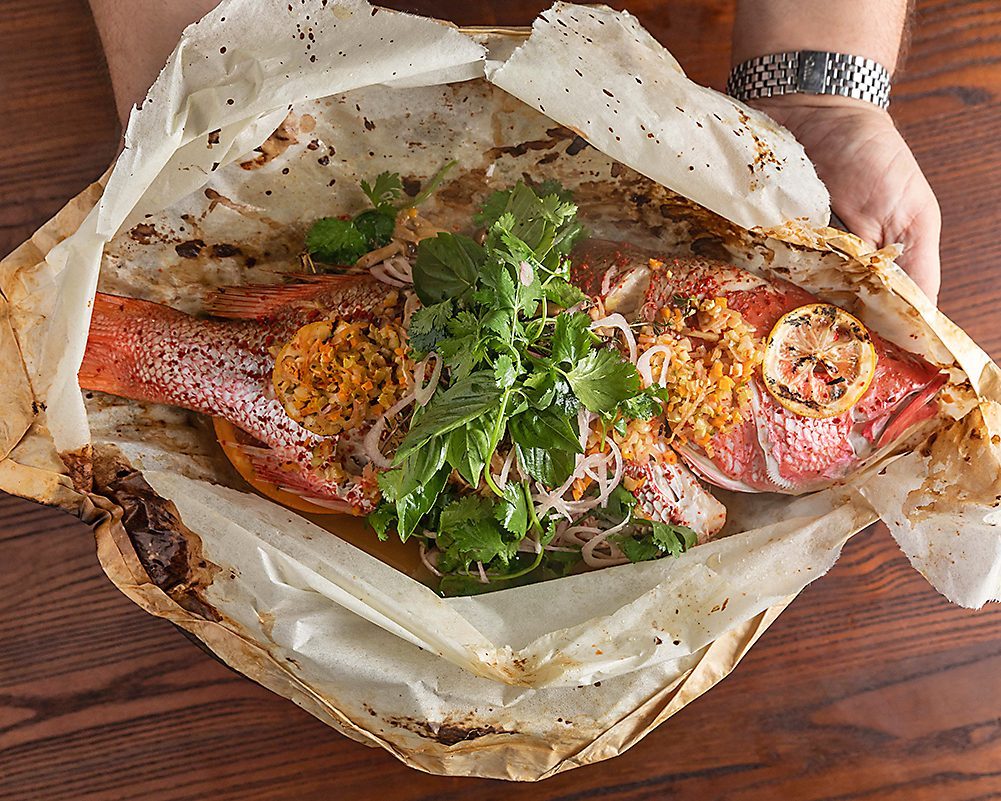 For fish lovers, the snapper "in an Envelope" at Reef hits the spot. Photo by Shawn Chippendale.

The dog days of summer are here. Luckily for Houstonians, this year these bring not just oppressive heat but also a whole bunch of new restaurant openings. These include some that specialize in cooling raw oysters big whiskey selections, dog-friendly patios or many food choices all in one convenient spot. One thing is for sure: if you have the means, you won’t be hungry for long.

B.B. Italia, 14795 Memorial: The latest restaurant from Berg Hospitality Group (the team behind B&B Butchers & Restaurant and B.B. Lemon) is serving hungry Houstonians classic Italian-American fare. Housed in the former Carmelo’s space, it offers diners a brighter dining room as well as a brand-new bar and patio. Open for lunch (with convenient to-go pizza and sub sandwich options) and dinner, the menu features appetizers such as whipped ricotta (as luscious as butter) with Sicilian oregano, olive oil and bread and Bacon Parmigiana, thick cut slices of bacon layered with tomato sauce and mozzarella, that debuted at B.B. Lemon. Housemade pastas include traditional dishes such as carbonara and bolognese and new selections like Grandma’s Ravioli stuffed with short ribs and topped with mushroom marsala ragù. Those looking for something besides pasta or Italian classics can try Italian fried chicken or pork ribs made with a hot Italian cherry pepper glaze.

B.B. Lemon (Montrose Location), 4319 Montrose: The Berg Hospitality Group continues to expand (B&B Butchers, B.B. Italia, B.B. Lemon) with the opening of their second B.B. Lemon location. Located in the former Pax Americana space, the Montrose outpost features many of the dishes from the Washington location, while introducing new seafood dishes such as flounder stuffed with creamy mascarpone and crab. For non seafood lovers, highlights include D.W.B. Mac & Cheese named after Berg’s brother Daniel Berg, responsible for the fresh pasta program as executive chef of B.B. Italia. Emily Trusler, the executive chef of the original B.B. Lemon, is also helming the new location along with beverage director Monique Cioffi-Hernandez. Cocktail lovers can sip on Soho’s Banker made with bourbon, turbinado, lemon, egg whites and red wine, and Belle of the Ball with gin, lemon, lavender and champagne. You can read more about what Houston Food Finder’s Carlos Brandon had to say about that mac & cheese.

Bravery Chef Hall, 409 Travis: We don’t know about you, but we’ve been waiting for downtown’s latest (and frequently written about) food hall to open their doors. Word has it, July is finally the month. Developed by partners Anh Mai, Lian Pham and Shepard Ross, Bravery Chef Hall will be home to six restaurants: Atlas Diner by Richard Knight , The Blind Goat by Christine Ha, BOH Pasta & Pizza by Ben McPherson, Cherry Block Craft Butcher & Kitchen by Felix Florez & Jess DeSham Timmons, Kokoro by Patrick Pham and Daniel Lee and Gaggenau Concept Kitchen (with a rotating roster of guest chefs); and three bars, Bravery Wine Bar by Shepard Ross, Lockwood Station @ Indie Bar by David Daquiri and Secret Garden by Jonathan Gallardo. That’s a lot of talent one roof, so you’ll probably want to go more than once. 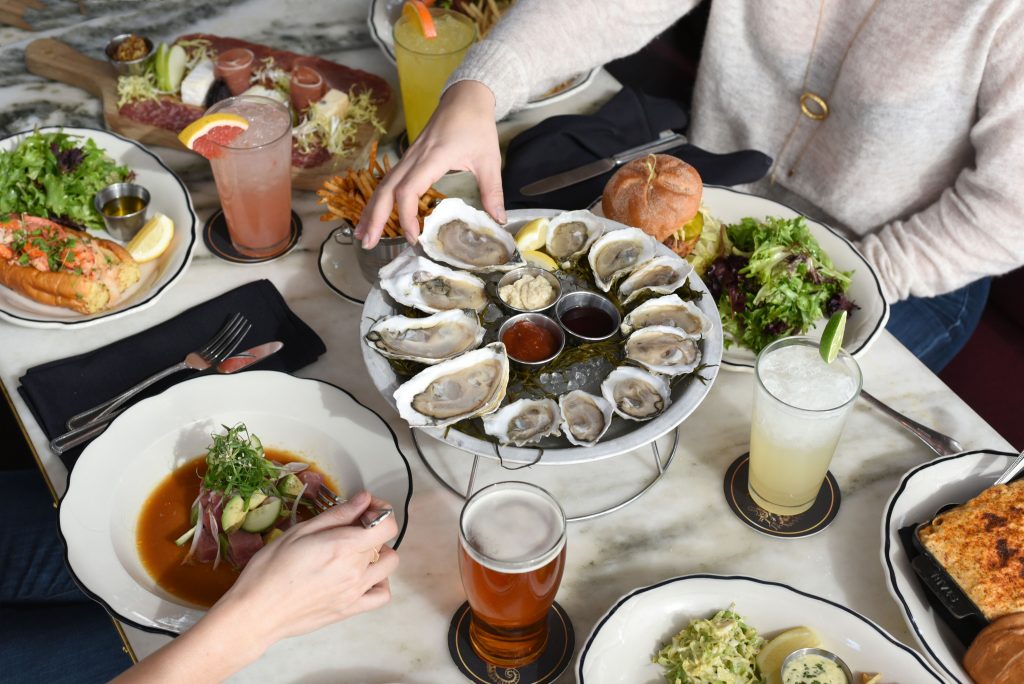 Loch Bar Restaurant and Ouzo Bay, 4444 Westheimer: From the Baltimore-based Atlas Restaurant Group comes Loch Bar and Ouzo Bay, in the River Oaks District. At Ouzo Bay, brothers Eric and Alex Smith are offering Houstonians a menu focused on Mediterranean cuisine. Committed to fresh sourcing, they fly in fish daily: langoustines from Norway, jumbo prawns from Madagascar, Dover sole from Holland and branzino from the Aegean. While seafood is the menu’s focal point, there are still ample selections for meat lovers with options like locally raised lamb shank with toasted orzo and roasted vegetables, as well as steak and chicken dishes. There is also an ample selection of mezes such as the House Spreads served with toasted pita. To accompany the hearty fare at Ouzo Bay, the Smiths tapped local sommelier Evan Turner to develop the beverage program, which features Greek wine and cocktails such as Phanes Poison made with Belvedere citron vodka, honey, basil, and lime and Milos’ Flame with Rittenhouse bonded rye, Cocchi Vermouth di Torino, Lapsang souchong foam and Angostura bitters.

Loch Bar is where the brothers are continuing to unveil one of the largest raw seafood selections in town. The menu focuses on traditional New England fare such as lobster rolls and Maryland-style crab cakes, while also incorporating locally influenced dishes such as Viet-Cajun crawfish. Loch Bar also plans to showcase over 400 whiskeys (at press time, they were at 350 and counting), local craft beers, and curated cocktails like The Olive Branch made with The Botanist gin, olive-infused vermouth and salt and the Foregone Conclusion with Tito’s vodka, Pimm’s No. 1, peach, lemon and soda.

The Original Ninfa’s Uptown, 1700 Post Oak: The new outpost from Houston classic, The Original Ninfa’s, which was founded on Navigation in 1973 by “Mama” Ninfa Laurenzo, opened its doors June 10 in BLVD Place in the space that was occupied by Peska. It features over 6,000 square feet, three covered patio areas and a flexible 50-seat private dining room. The menu mirrors the original and includes favorites like marinated and grilled skirt steak fajitas and tacos al carbon. There are plans for an additional happy hour menu in the bar with cocktails developed to draw inspiration from the surrounding Uptown area. The new location is currently open for lunch and dinner during the week, with brunch on Saturday and Sunday. There are also plans to launch Ninfa’s first ever breakfast service later this year.

Reef, 2600 Travis: Almost two years after Harvey forced the closure of this local favorite, Reef reopened its doors this past month. Celebrity chef-restaurateur Bryan Caswell  gave both the restaurant and the website a new look, but as Houston Food Finder founder Phaedra Cook notes, one thing hasn’t changed: Caswell’s intense focus on Gulf seafood.  New dishes like the Crab Fat Dough starter and Snapper in an Envelope (en papillote) with grapefruit, hon shimeji (brown beech mushrooms) and herb salad have been receiving high praises from Houston diners alongside familiar dishes like Caswell’s seafood gumbo. From the bar, Reef offers cocktails like the Hemingway Daiquiri with white rum, maraschino, lime and grapefruit and the Purple Drank with gin, lime and grape soda as well as a selection of wine and craft beers.

Squable, 632 West 19th: This new restaurant in the former Southern Goods space in the Heights is backed by Bobby Heugel, James Beard Award-winning chef Justin Yu and Steve Flippo, but operated by co-chefs Mark Clayton (formerly of Oxheart), Drew Gimma (the opening baker for Common Bond) and operations manager Terry Williams. The menu showcases “European fare with American influences”, while incorporating locally sourced ingredients. Taking full advantage of Gimma’s baking experience, Squable features rotating seasonal breads and standout dishes like the Dutch baby pancake made with fresh cheese, black pepper and honey. For entrees, Clayton’s handmade pasta and Pork Neck Schnitzel take center stage. The menu also includes a dozen or so shareable plates, such as the maltagliati (Italian for “badly cut”) pasta, and big plates such as the schnitzel and half a heritage chicken served with bread dumplings and chicory tossed with a Parmesan-soy dressing. Get more details in our full article on Squable’s opening.

Trendy Dumpling, 3285 Southwest Freeway: The team behind Spicy Girl recently transformed their West University location into Houston’s latest Chinese cuisine hot spot, Trendy Dumpling. There is a lot to choose from with an assortment of pork and chicken soup dumplings sitting alongside Sichuan classics like salt and pepper shrimp, orange chicken and mapo tofu and fish. Dumpling highlights include the Truffle Steamed Soup Bao, a special soup dumpling made with uni and shrimp, and the pan-fried pork bao.  Appetizers such as smoked eggplant, cucumber salad and couples tendon are standouts and great for sharing. The restaurant is currently B.Y.O.B in addition to in-house selections of wine and beer.

Tropicales, 2132 Bissonnet: The Latin-inspired Tropicales from Greenway Coffee-owner David Buehrer, Carlos Ballon of Morningstar, James Beard semi-finalist pastry chef Jill Bartolome and bartender Kenny Freeman, formerly of Julep, is already a neighborhood favorite. Located between Greenway Plaza and Rice University, the café was developed in conjunction with nearby residents Steve and Hilary Ybarra and offers diners a beautifully designed space resplendent with rich wood tones, muted pastels and a full-service outdoor patio. Standouts include salmon ceviche made with sweet mango and sour red onions in a spicy jalapeño, lime, guava and coconut milk sauce. For cocktail lovers, Freeman has created drinks with Mexican, South American and Asian influences. Try the Powers of Peru made with pisco, bell pepper extract, lemon, agave and cava. For more details, read our full article on the opening.

Saturday, October 2nd | 2 to 9 p.m. | Pearland Town Center Bring your friends, your appetite, and your lederhosen to this year's Oktoberfest-themed Music to My Beers extravaganza. The event highlights independent craft breweries south of Houston, and is FREE and open to the public. Local
37    View on Facebook

Fans in the Heights who love Becks Prime are going to have to drive to one of the other Houston locations, as that one is closing.
9 5    View on Facebook

On September 24, 2021, Galveston Island is welcoming back the Wild Texas Galveston Island Shrimp Festival after a semi-hiatus last year due to the COVID-19 pandemic.
4 1    View on Facebook