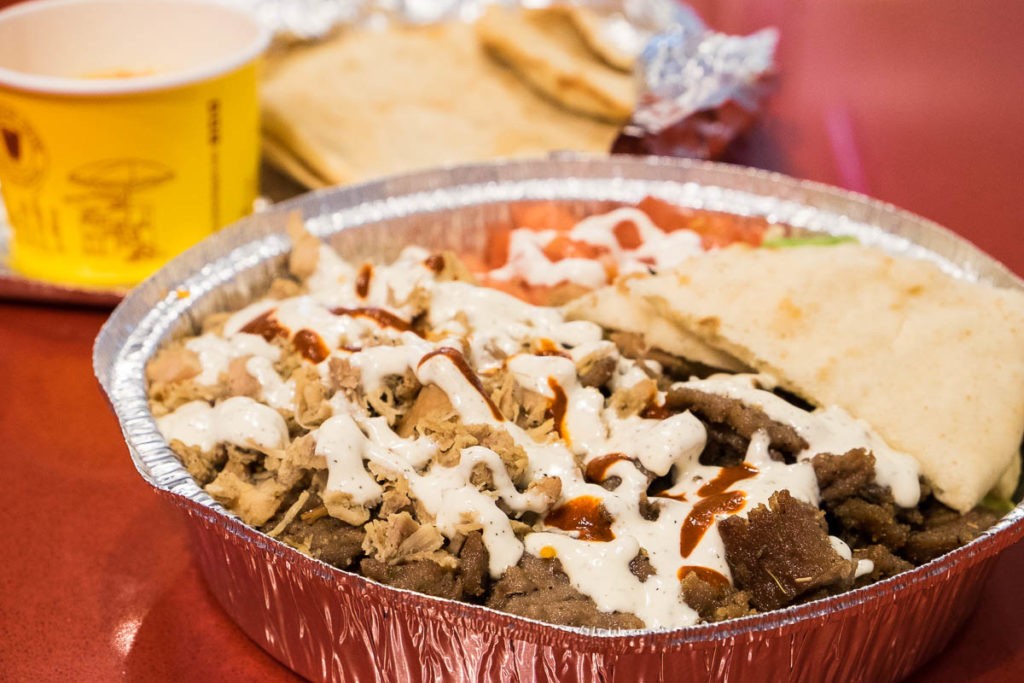 The chicken and beef combo platter at The Halal Guys — with a hearty dose of the garlicky "white sauce", of course. Photo by Phaedra Cook.

The Halal Guys is expanding its footprint across Houston — and it’s headed downtown. Operated by Houston-area franchisee Masroor Fatany, the new location opens on March 2 in the Hines Tower at 609 Main. The Greater Houston Texas Restaurant Association (GHTRA) is marking the occasion at noon with a ribbon-cutting ceremony. The downtown spot is the sixth for the national halal chain, which started as a cult-favorite food carts in New York City. Locations in Pearland and Katy are expected to follow.

The Halal Guys are know for fast service and Middle Eastern classics such as gyro and chicken platters with rice, hummus and baba ghanoush. The sauces — a garlicky white sauce and a hotter-than-heck red pepper sauce — are both well-known and maybe even a little addictive. Expect a few limited-time dishes, such as Eggplant Hummus, to appear on the downtown menu, and a new Vegan Gyro addition is coming to all locations.

The new digs are 3,400 square feet and can seat 38 guests. The downtown shop design is reportedly brand-new for the chain (but we don’t have a photo to show you just yet; we’ll add it if we get one).

“I couldn’t be more excited about the expansion of The Halal Guys in Houston,” said Cameron James, President of GHTRA via a press release. “Masroor is an outstanding restaurateur, and he brings a well-loved brand to the city. It’s so encouraging that in the midst of a pandemic, which has decimated the restaurant industry, restaurateurs like Masroor are finding ways to continue to grow their business. I know The Halal Guys will be welcomed by so many Houstonians downtown.”