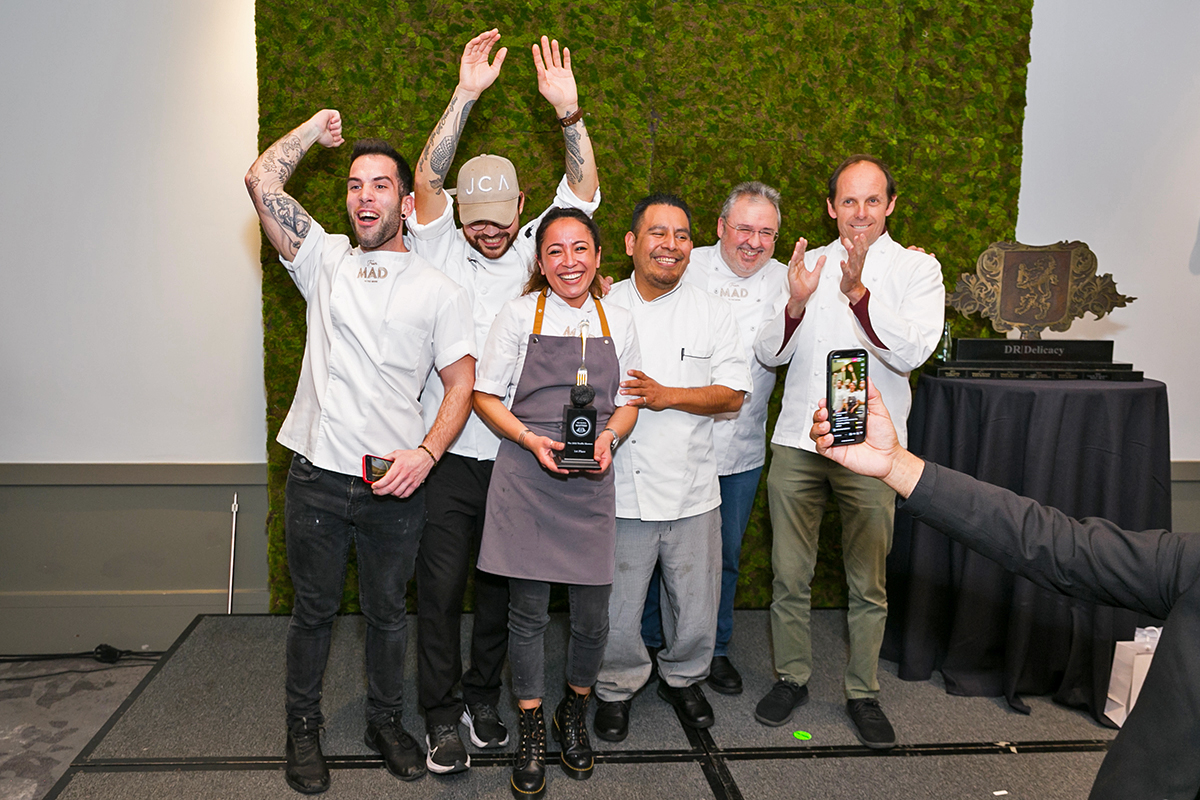 MAD Houston, which won The Truffle Masters in 2019 with a dessert by pastry chef Karla Espinoza, repeated the feat for 2022. On the far right is executive chef Luis Roger. Photo by Emily Jaschke.

Crowds enjoying the glitz and glamour of The Truffle Masters event, hosted at the C. Baldwin Hotel by luxury foods purveyor DR Delicacy, was a welcome sight after two years of a pandemic. At the center of the event was the competition among high-powered Houston chefs to determine who was this year’s Truffle Master (or Mistress, as the case may be). As it turned out, three prior winners — and a dark horse restaurant that’s not even open yet — nabbed the top three judges’ honors, plus the People’s Choice award.

Chef Manabu “Hori” Horiuchi and his team at Kata Robata entered the competition as three-time Judges’ Choice winners, having won in 2016, 2017 and 2019 (the last year of the in-person competition before the pandemic). This year, they again took top honors — but this time, thanks to the will of the people. Kata Robata won the People’s Choice award for its silky, perfectly pink fatty tuna wrapped in nori, as well as for a remarkable mini truffle ice cream sandwich made with light-as-air ice cream cone “cookies”.

For the Judges’ Choice awards, last year’s winner, Hidden Omakase — led this time by chef Niki Vongthong rather than chef Billy Kin, a fellow competitor this time for his own restaurant, Kinokawa — wowed both judges and the crowd with not one, but three dishes, all made with fresh black truffle.

The restaurant that captured second place came as something of a surprise, as it’s not even open yet. Money Cat, as previously reported, is expected to open this summer in the Upper Kirby area. Chef Sherman Yeung, who also runs Tobiuo, a sushi restaurant in Katy, led his team to the second-place win with the dual dishes of Mushroom Truffle Rice with Wagyu and Chocolate Bonsai Tree with Truffle Ice Cream.

(Interestingly, it was not the only chocolate tree of the night, as Mussafer entered its own version along with chocolate truffles buried in chocolate cookie “soil.” For the visually spectacular judges’ presentation, there were even pig-shaped wafers, apparently hunting for those precious truffles.)

Taking the top Judges’ Choice honor was another repeat winner — with a similar dish, too. Acclaimed pastry chef Karla Espinoza and the team of MAD Houston, led by chef Luis Roger, won the 2019 Truffle Masters with one of Espinoza’s black truffle desserts. Clearly, that’s a strategy that works, as this time, it was Espinoza’s Basque Cheesecake Bon Bon filled with citrus and truffle that won first place.

With 500 attendees, and no shortage of decadent food and drinks, it’s a fair bet that The Truffle Masters will return around the same time next year — and all the competing chefs are likely to be scheming the whole time on how they’re going to wow the judges and attendees with new, delightful black truffle dishes.