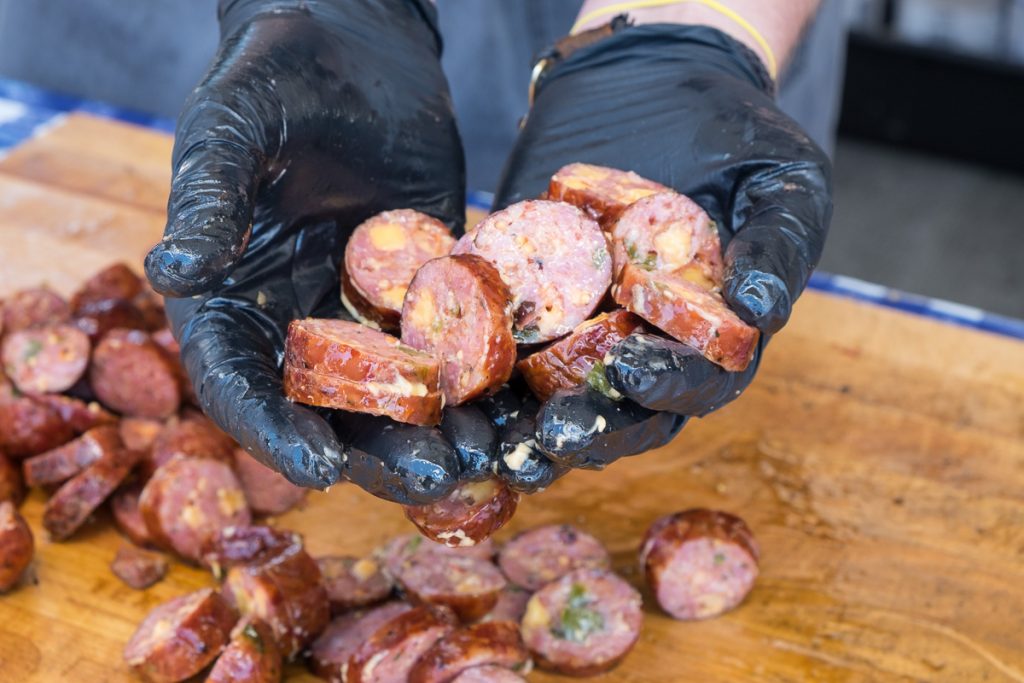 As usual, the 2018 Houston Barbecue Festival seemed to be a roaring success with many attendees. The mild, sunny day with temperatures in the low 70s couldn’t have been better.

An increase in barbecue purveyors this year meant shorter lines at most booths. There were a few exceptions. Huge lines persisted at the Truth Barbeque booth and Killen’s Barbecue, which wasn’t exactly surprising.

This was the first year the festival was held at the Humble Civic Center. From those traveling from inside the 610 Loop, it was an easy Sunday drive up I-69. The new venue meant free parking—and more flexibility with which craft beers could be served thanks to not being subject to another company’s beverage contracts. The Saint Arnold Beer Garden sported three serving stations. Based on the perpetual lines, festival goers were thirsty for a taste of the company’s local brews.

We didn’t get to try everything, but here are some of the best bites we had at the festival:

Collectively, the offerings at this year’s festival showed a maturing of the Houston barbecue scene—one that is defined by more than the influence of central Texas barbecue culture. A look at the list above reveals ingredients and dishes pulled from the cuisines of Louisiana, Mexico, Korea, Argentina and even Italy.

In addition, the sides have become as important as the meats. Many on display this year boasted interesting twists or housemade ingredients, such as the blue corn chips from El Burro & The Bull. The chocolate panna cotta served by the Tejas Barbecue barbecue booth and the Big Red ice cream from Buck’s Barbeque were as fine as any and both were a refreshing respite from the heavy meats.

While Houston BBQ Festival co-founder (and Houston Chronicle barbecue columnist) J.C. Reid can’t yet confirm any details for next year’s event, he still had one simple but important thing to say:

“Thanks to all the volunteers, barbecue joints, sponsors and guests for a great festival!”

Thanks also to Houston Food Finder barbecue columnist Scott Sandlin for the photo ID help and contributions to the best bites list.

Houston Food Finder with Pearland Convention & Visitors Bureau.18 hours ago
Pearland's restaurant scene has grown by leaps and bounds over the past several years — and the drink scene has grown right alongside. Find out where to get great coffee, bubble tea and craft beer in the link below!

Houston Food Finder with Roma Ristorante.18 hours ago
Embark on an Italian adventure with Roma Ristorante during the Under a Sicilian Sun virtual wine dinner on March 4! This week's event also features special guest Melissa Muller, author of Sicily: The Cookbook. Each three-course meal is $119 per couple and $85 for individuals — and that cost includes 𝗧𝗛𝗥𝗘𝗘 bottles of wine. Pairings include Feudo Montoni: 𝟮𝟬𝟭𝟵 𝗚𝗿𝗶𝗹𝗹𝗼 (served with Eggplant Parmigiana Roulade), 𝟮𝟬𝟭𝟵 𝗥𝗼𝘀𝗲 𝗱𝗶 𝗔𝗱𝗲𝗹𝗲 (served with Busiate, a Sicilian semolina pasta with a traditional tomato, basil and almond pesto) and 𝟮𝟬𝟭𝟴 𝗡𝗲𝗿𝗼 𝗱’𝗔𝘃𝗼𝗹𝗮 𝗟𝗮𝗴𝗻𝘂𝘀𝗮 (served with classic breaded and grilled pork loin with Caciocavallo cheese). Pick up from 5 to 7 p.m. on March 4; the Zoom virtual experience starts at 7:30 p.m. To reserve, email Jeremy Parzen at jparzen@gmail.com. For more information visit the event website: https://romahouston.com/2021/03/01/under-a-sicilian-sun-virtual-wine-dinner-3-4/