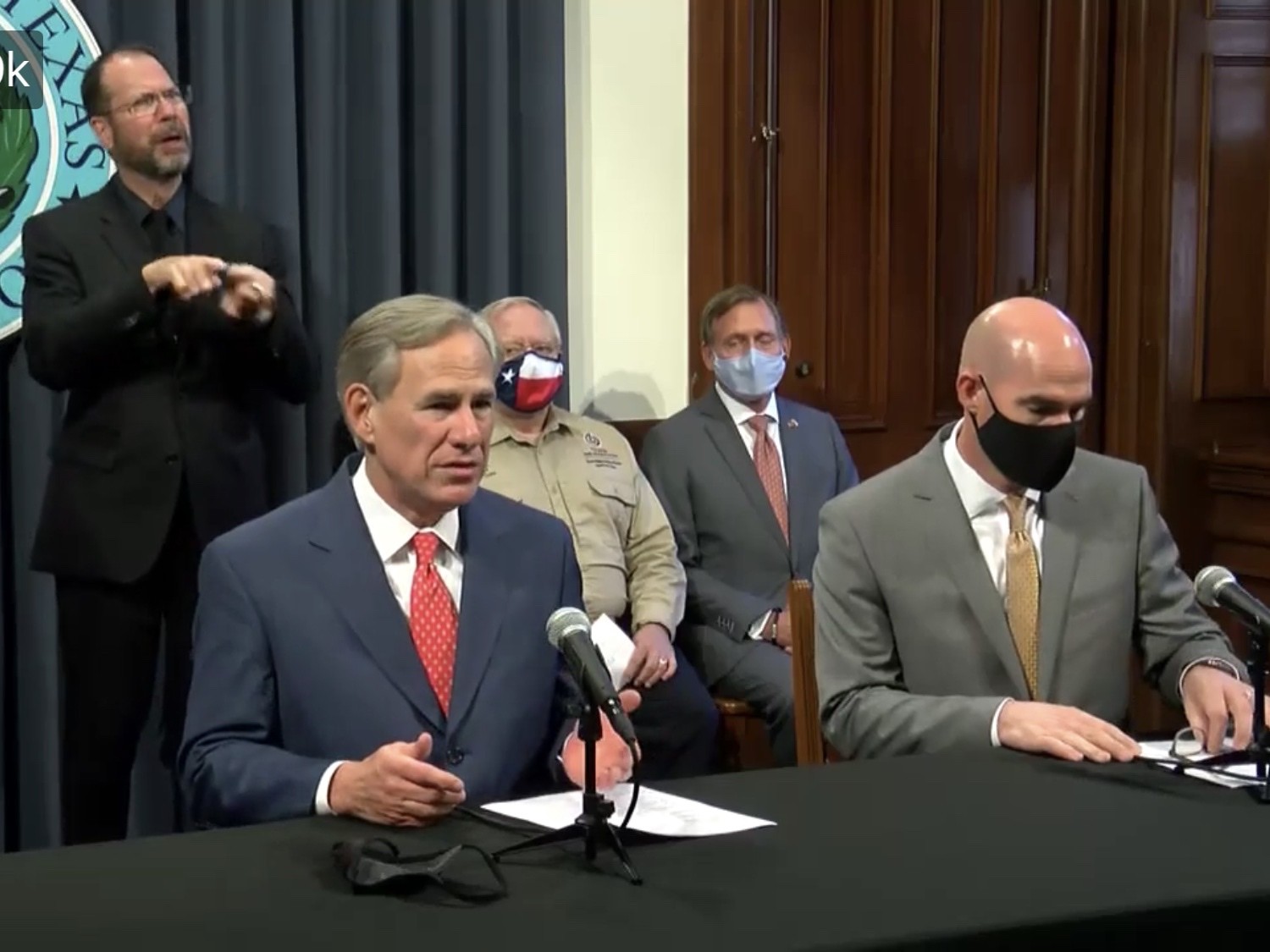 In a press conference earlier today, Texas Governor Greg Abbott announced that restaurants, along with retail stores, museums, libraries, gyms, office buildings and factories, can begin operating at 75% occupancy on Monday, September 21. These establishments are currently open at 50% capacity.

“That’s a little more aggressive than I would prefer,” said Houston Mayor Sylvester Turner at his own press conference this afternoon, where he discussed the Governor’s decision and the current status of COVID-19 in Houston.

Abbott also stated that bars that are not operating as restaurants have to remain closed for now. In late August, TABC amended its rules to make it easier for bars to sell food and operate under the regulations that govern restaurants.

The decision to increase operating capacity is based on COVID-19 hospitalization rates in 22 hospital regions that mirror the state’s Trauma Service Areas. The above-noted establishments in regions where COVID-19 patients represent less than 15% of hospitalizations can move to 75% occupancy. At the Mayor’s afternoon press conference, it was revealed that the COVID-19 hospitalization rate in the Houston-area, Region Q, is currently 6.9%. According to Abbott, only three regions — Laredo, Rio Grande Valley and Victoria — do not meet the new benchmark.

This new guideline represents a shift from the previous emphasis on coronavirus positivity rates, a statistic that the state is in the process of revamping. In addition, at the Mayor’s press conference Dr. David Persse, Health Authority for the Houston Health Department, stated that though hospitalization rates are an important competent of our overall statistical tool kit for evaluating the coronavirus’s effects in our communities, they are also a lagging indicator that doesn’t always give the best picture of the current situation.

Though capacity restrictions are being loosened, restaurants and diners still must follow the safety protocols that were established when restaurants were allowed to reopen at 25% occupancy on May 1. These include wearing masks when social distancing is not possible and keeping tables and seating six feet apart — a requirement that will make it difficult for many restaurants to operate at 75% occupancy.

This is the state’s second attempt at expanding restaurant capacity to 75%. As part of Abbott’s Phase 3 reopening plan, restaurants were able to move from 50% to 75% capacity on June 12 and bars were allowed to open at 50% occupancy on June 3. However, swiftly rising COVID-19 cases and deaths forced Abbott to quickly reverse course, shuttering bars and reducing restaurant indoor seating to 50% on June 26 — a mere 23 days after bars were allowed to reopen.

After Abbott launched the first phase of reopening on May 1, Texas suffered the majority of its COVID-19 cases and deaths, resulting in 674,772 Texans contracting COVID-19 and 14,478 losing their lives to the virus.

The virus and fight to reduce its impact has wreaked havoc on the hospitality industry and employees. Millions have been either jobless or underemployed, and the Texas Restaurant Association estimates that half of the state’s restaurants may close in the next six months. Most at risk are small, independent bars and restaurants that lack substantial capital and resources to remain afloat long-term. During the pandemic, it’s been difficult to both protect the health of area residents while also making sure they have food on the table and a roof over their heads.

The Houston-area has been successfully reducing the number of new COVID-19 cases and positivity rates, but as state officials repeatedly empathized at today’s press conference, the virus is still with us.

A point Mayor Turner emphasized as well, “As much as we want to get to normal, we are still not in normal times.”

Updated on 9/17/20 at 4:44 with additional information and quotes for Houston Mayor Turner’s afternoon press conference.