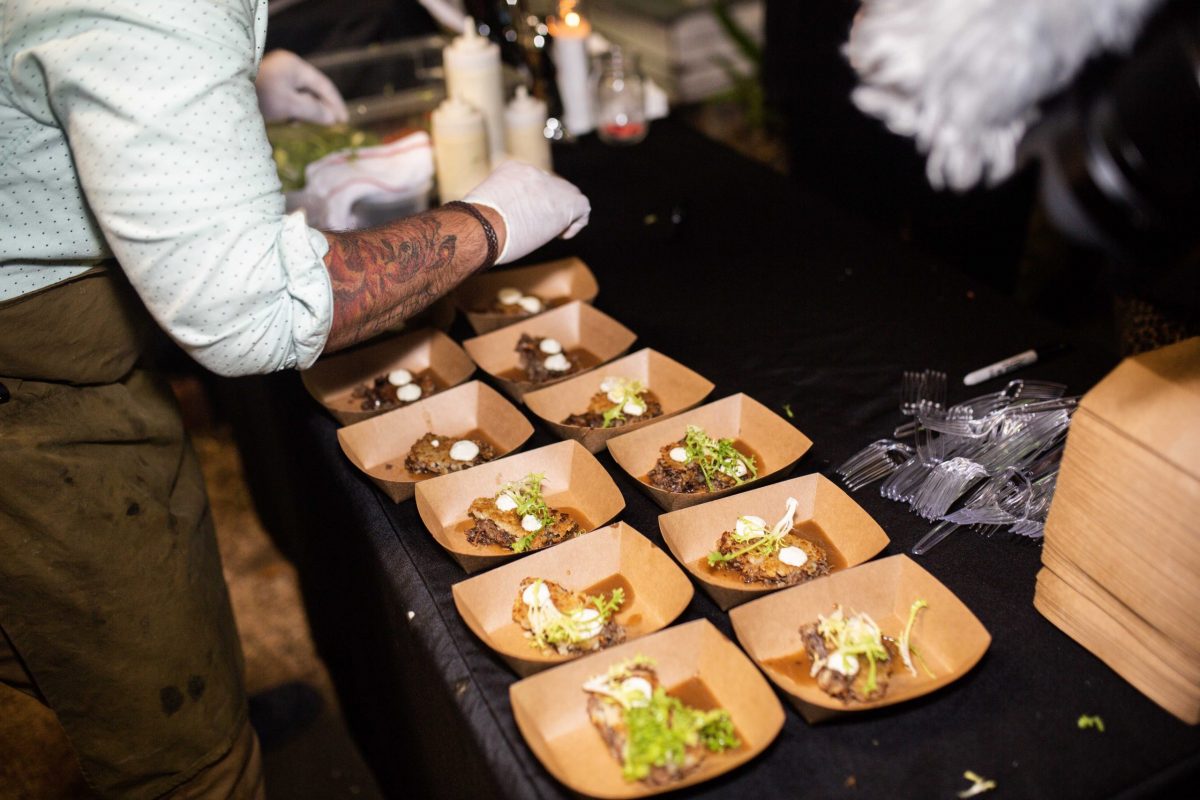 The choicest garden party in town is based on the rear end of a cow — the tail, or as it’s commonly known in the kitchen, the oxtail. Despite its humble origins, a well crafted oxtail dish is a thing of beauty. “Oxtail is peasant food,” says Rishi Singh, executive chef at the Hotel Derek, who is participating in his third Oxtail Mashup. This culinary celebration of the down-to-earth oxtail benefits Project Row Houses and Texas’ Children’ Sickle Cell Anemia program, and takes place on Sunday, November 14, from 6 to 10 p.m. at Project Row Houses at 2521 Holman Street. (VIP entry begins at 6 p.m.; general admission begins at 7 p.m.)

Since oxtails are more collagen and bone than meat, when properly prepared, a rich gelatin is release, and it’s part of the allure. “It’s a slow process, but when you are done, you get a luscious, mouthwatering collagen softness that’s so comforting,” says Singh.

Singh enjoys participating in the Oxtail Mashup because the location is a sanctuary for artists, the weather is always nice and it’s a treat to honor the modest ingredient. “There are great bartenders, too,” he says. In the past he has served curry and menudo. This year, he is making white bean and oxtail stew.

The idea for the challenge came when Shakti Baum, chef/owner of Etta’s Kitchen, and Chris Williams, chef/owner of Lucille’s, were smack-talking about who made better oxtails. Afterward, Baum started thinking about organizing a competition. So she talked to her friend Warren Luckett, founder of Black Restaurant Week, and decided to create a fun event that would raise funds to support two groups close to their hearts. Baum says the result, the Oxtail Mashup, is “a wildly delicious and artistic mashup of creations in various mediums, appealing to all the senses and true to Houston’s diverse nature.”

Previous years’ entries included oxtail marmalade, tamales and “Pop Tarts” made by local chefs such as Dawn Burrell, the 2019 Judge’s Winner, a 2021 Top Chef contestant, and chef/partner in the upcoming Late August, part of Williams’ new Lucille’s Hospitality Group. “This year, we threw in a few new twists for guests to enjoy with a little competition from some well-known names beyond Texas” said Baum. Chefs are flying in from all over the country to participate, and they are not afraid to think beyond oxtails in brown gravy.

Fifteen chefs and five bartenders are going head-to-head to “create the most inventive oxtail dishes, pulling from their own diverse roots and global flavors of Jamaica, Asia, Peru, France and more” according to a press release. The people’s choice winners will receive $500, and the chef who makes the judges’ favorite dish will win a trip to Oaxaca, Mexico. This year’s chef contestants are:

Bartenders are creating fresh, innovative, Tiki-inspired punches from pre-selected spirits and locally sourced ingredients. Guests can sample all five competing cocktails and also warm up at the hot toddy bar. The “People’s Choice” best barkeep of the night will win a grand prize of $500 cash. Guests will also be able to enjoy beers brewed in Houston and New World wines from event sponsor Branwar Wines. This year’s bartender contestants are:

There is more to this garden party than just great food. It is set at Project Row Houses, a campus in the Third Ward that encompasses five city blocks and 39 buildings, centered around a row of revitalized shotgun-style houses, that have been converted into the home of groundbreaking art projects and innovative neighborhood centers. Guests will be free to stroll through the artists’ installations while DJ Melodic and DJ G-Funk spin melodies by the fire pits. There is also a silent auction benefiting Project Row Houses and the Texas Children’s Hospital Sickle Cell Anemia Program.

General admission tickets for the event are $75 (plus fees and sales tax) and include admission at 7 p.m., one food sample from each chef and four drink tickets. VIP tickets are $135 (plus fees and sales tax) and include early entry at 6 p.m., unlimited food samples from each chef, complimentary cocktails, access to Etta’s Private Lounge and Bar and a parking pass. A portion of all proceeds will benefit Project Row Houses and the Texas Children’s Hospital Sickle Cell Anemia Program. For more information and to purchase tickets, visit the Oxtail Mashup website.