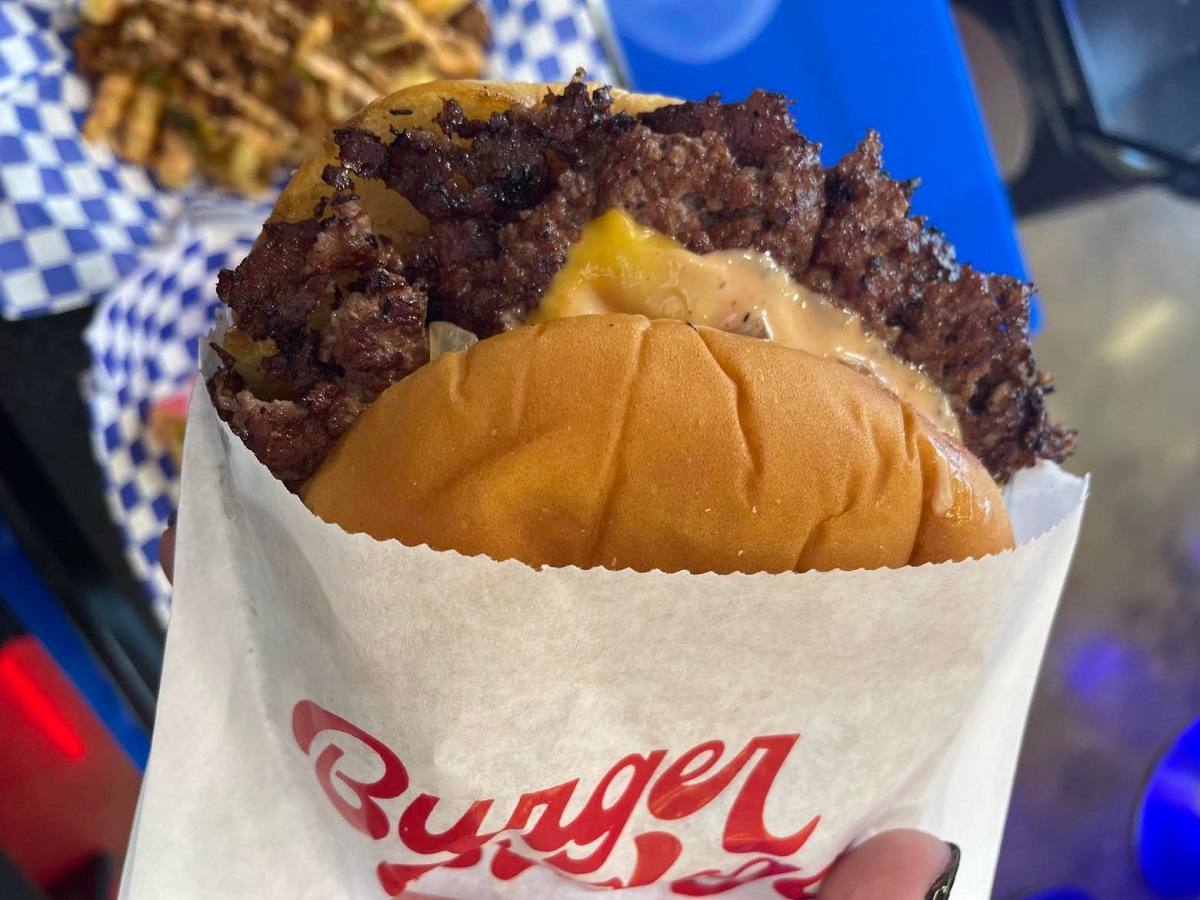 Since Abbas Dhanani served his first smash burger in September 2021, his Burger Bodega has been a hit. Now, his perpetually popular pop-up is putting down permanent roots at 4520 Washington. The brick-and-mortar, which was a fire station from 1937 to 1991, officially opened November 3. Houston Food Finder was invited for a preview of the New York bodega-inspired restaurant and try some of the dishes.

The menu is short but sweet, and the high points include the only item that was available at the Burger Bodega events: the double smash burger with two beef patties, American cheese, grilled onions, pickles and bodega sauce on a potato bun. The new spot now gives diners the option to choose one, two or three smash patties. This is good news for those who love this burger style. Some burger places use thin patties and call them smashed, but Burger Bodega serves a true version, fully flattening the beef patty to create crispy, latticed edges.

The brick-n-mortar location also has two additional burgers. There is a classic cheeseburger on a sesame bun and the New York city bodega classic, chopped cheese, which is two chopped burger patties mixed with melted American cheese, onions, bell peppers, bodega sauce and “shredduce“ (shredded lettuce) on a hero roll. While the small menu is focused on burger variations, Dhanani and his team do an excellent job making each option unique by playing with different textures, buns and toppings.

Not surprisingly, Burger Bodega’s sides are french fries. (It is a burger joint.) Choices are classic thin-cut fries, and in homage to Houston music, two takes on loaded fries: Chopped and Screwed. (I prefer “screwed and chopped” but that phrasing is not as popular anymore.) The Chopped is thin-cut fries topped with cheese sauce, onions and bodega sauce and the Screwed adds chopped beef and bell peppers to the mix.

Burger Bodega partnered with chef Steve Marques‘ Craft Creamery to create its selection of milkshakes, which includes classics such as vanilla, strawberry and chocolate, as well as more distinctive flavors like Vietnamese coffee and mango lassi. The Vietnamese coffee shake is the same as the popular one served at Marques’ former burger joint, The Burger Guys, and the mango lassi is in honor of Dhanani’s Pakistani heritage. Neither shake is shy when it comes to the namesake flavors, but the mango lassi stands out with a bright sweetness.

Dhanani is no stranger to working in the restaurant world. He is a food influencer, running the Instagram account, Houstoneatz, and his family operates several hundred fast-food franchise locations, with brands such as La Madeleine and Burger King. While speaking with Dhanani, he stated that his original intention was to transform his pop-ups into a food truck and operate while not working with the family business. However, with the continued support from guests and his family, he decided to go all in and turn Burger Bodega into a brick-and-mortar.

The interior of Burger Bodega is fun and immersive, creating a style similar to New York City bodegas, while paying homage to the city of Houston. The walls of the restaurant are lined with faux bodega goods, such as “Meowonnaise,” “Bodega Flakes” and “713up,” most of which feature the restaurant’s mascot, a cartoon bodega cat. However, there are shelves featuring real products from local businesses, such as Greenway Coffee, Kin, Bludorn, Blood Bros BBQ and more. The walls near the restrooms and staircase leading to the upstairs patio are stylized with a collaborative mural of bodega cats by the famed Houston artist DonkeyBoy, his students Young Art Pros and graffiti artist Noke713. The overall design was developed by DonkeyBoy, while each cat was painted by a different student and Noke713 tagged each student’s name on their respective feline.

Burger Bodega is open seven days a week starting from 11 a.m. to 9 p.m. Eventually, Dhanani intends to keep the shop’s walk-up window open as late as 3 a.m. on the weekends.