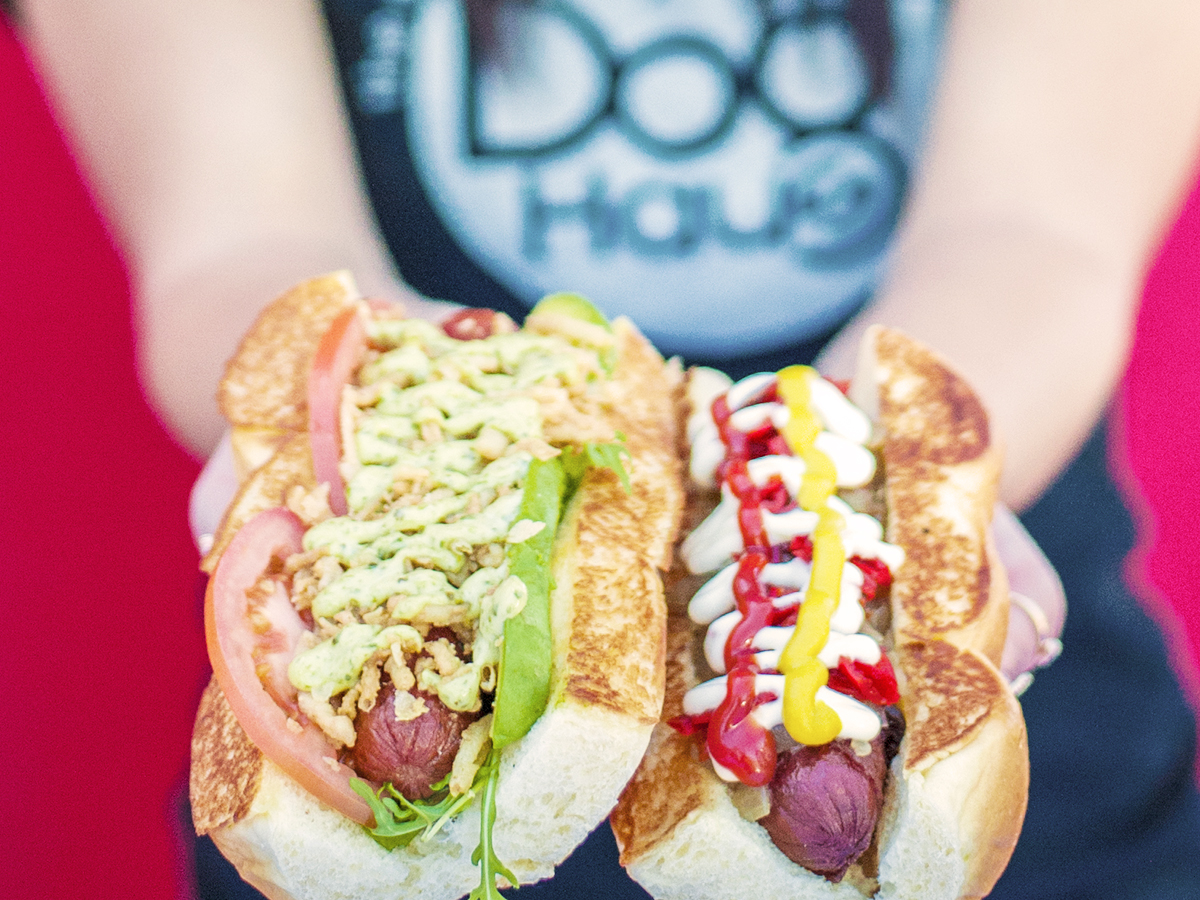 Food from restaurants, including Dog Haus, is now available at the Kroger on Shepherd in the Heights thanks to the Kitchen MIX program. Courtesy photo.

Imagine this: your family members or friends are all wanting to order dinner from different restaurants. Now, instead of having to compromise on only one restaurant, pick up from multiple places or wait for numerous third-party delivery services (paying tips and fees for each one), you can now just visit a grocery store. Well, if you’re in or near the Heights, at least. What once seemed like an exhausting scenario is now seamless, thanks to a swanky new multi-ordering platform called Kitchen United MIX, located inside Kroger at 1035 North Shepherd.

“Together, our teams took out five aisles to build a 10,000 square-foot Kitchen United MIX location, which will be the second collaboration of its kind for Kroger in the state of Texas,” said Jeff Bailey, who has been the Kroger North Shepherd store manager for the past 44 years. “Kitchen United MIX is the future of restaurant dining,” explains Michael Montagano, Chief Executive Officer of Kitchen United. “Simply put, it’s diversity ready to order.”

Over the past year, Kitchen United has partnered with Kroger grocery stores across the United States to bring its proprietary restaurant technology to stores. The company creates turn-key solutions for brands looking to leverage ghost kitchens and grow their reach, whether that includes on-premise or off-premise sales. Currently, there are 14 Kitchen United MIX locations operating across California, Arizona, New York, Illinois and Texas. Three more locations are planned for Frisco, Plano and Dallas later this year.

So, how does it work? Customers place and pay for orders from their choice of nearly 15 different restaurants either at an in-store kiosk or through the Kitchen United MIX app. These include local, regional, and franchise brands such as Bad-Ass Breakfast Burritos, Bad Mutha Clucka, Bucca di Beppo, Burns Original BBQ, Capriotti’s, Dog Haus, Fudruckers, The Impossible Shop, Jailbird, Joe Leo, MrBeast Burger, Plant B, The Rustic, Snowfox and Wing Zone. While each brand does not offer its entire regular menu, most of the popular items are available.

When an order is placed, a conveyor belt transports it from the kitchen to a pickup area staffed by a “concierge” in a matter of seconds. It’s then placed in a cubby, and the customer is notified that the order is ready. Kitchen United relies on Google Ventures-backed technology that allows multiple brands to appear on a single receipt. That means that customers can order from as many different restaurants as they want, all during one transaction.

We were invited as media to try some of the food during the grand opening. We opted for the much-hyped about virtual brand, Mr.Beast Burger, known for its double-stacked beef burgers topped with melted American cheese. Next, we tried some delicious crispy chicken tenders with barbecue sauce from Dog Haus; caprese tomato and basil salad from Buca de Beppo, and a smoked ribs and sausage plate from Burns Original BBQ.

While it is a great option for Kroger to offer customers, ghost kitchen concepts also allow restaurant brands to expand without the expensive real estate or maintenance costs of brick-and-mortars.

“This is the future and we are so excited to be a part of it to help us grow our brand even further across Houston,” said Cory Crawford of Burns Original BBQ, a notable family-owned establishment that once caught the attention of the late Anthony Bourdain for “Parts Unknown.”

Although the old-school way of dining isn’t going anywhere, the Kitchen United MIX concept makes it easy to satisfy a variety of cravings. The Houston location is open Sunday through Thursday from 10 a.m. to 9 p.m. Friday and Saturday from 10 a.m. to 10 p.m.