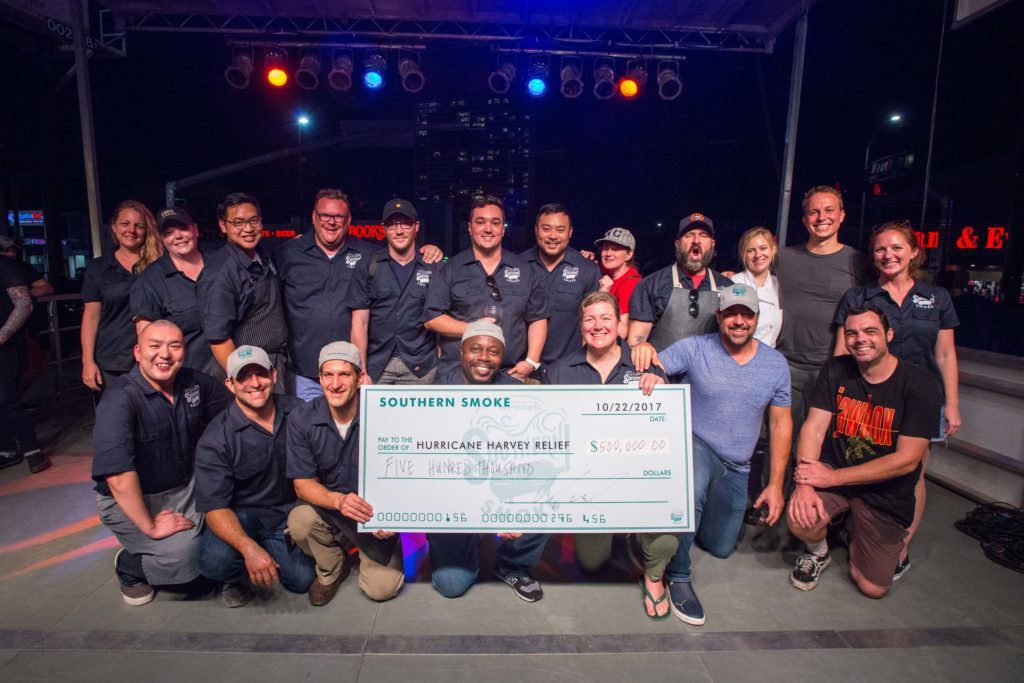 Leaders of the Southern Smoke Foundation and the Restaurant Workers Community Foundation have released an urgent plea explaining just how dire the current economic crisis is for hospitality workers. In Houston alone, dining rooms are currently operating at 50% of regular guest occupancy. Bar workers are even worse off. Bars have been completely closed for a second time since June 26, although some owners have grabbed a lifeline offered by the Texas Alcoholic Beverage Commission to convert to restaurants by offering food.

In short, the public op-ed, authored by Restaurant Workers’ Community Foundation co-founders John deBary and Michael Remaley and Southern Smoke Foundation co-founder Chris Shepherd and Executive Director Kathryn Lott, says that it is time for the United States government to create a plan that will assist restaurant workers and ensure the survival of small hospitality businesses. Thanks to numerous donations, the Southern Smoke Foundation alone has given grants totalling $3.1 million to workers during the COVID-19 crisis — and while that is remarkable, there is only so much any one entity can do.

One proposed, bipartisan measure called the RESTAURANTS Act was introduced by Congressman Earl Blumenaur (D-Ore) and co-sponsored by Senator Roger Wicker (R-Miss) on June 18. Two-and-a-half months later, the bill is still in limbo. “185 congresspeople and 27 senators have co-signed, but it hasn’t even made it to the floor,” said Southern Smoke Foundation representative Lindsey Brown.

The following is the joint op-ed issued by the two charitable organizations.

America’s restaurants and their workers are, yet again, on the brink of disaster, and no amount of delivery service, to-go cocktails, or al fresco dining will save them.

Restaurant workers live paycheck to paycheck. Fewer than 15 percent had healthcare before the pandemic, and without the additional $600/week in benefits, many are having to make impossible choices about paying rent, buying groceries, and seeking medical care. That’s not to mention the workers – among them an estimated 800,000 to 1 million undocumented workers – who never received government help.

From the onset of the crisis, nonprofits and relief funds provided a financial lifeline to the most vulnerable members of our community. With fundraising support from Restaurant Workers’ Community Foundation, Southern Smoke Foundation has distributed $3.1 million and counting to nearly 1,700 individuals facing perilous circumstances.

We always knew that the amount raised would pale in comparison to the need, and Southern Smoke estimates that it would take $47 million just to fund its current 28,000 applications – not to mention the influx they expect to receive in the coming weeks.

What are Southern Smoke caseworkers seeing now? Consider a family of four, among them a child with disabilities, who has been walking six miles to pick up food from a church pantry; or a mother of two young children who lost her partner, her job, and the ability to find new work in restaurants; or an unemployed mother who gave up for adoption her 6-month-old daughter “to make sure she had the best life possible and never had to struggle like her Mommy.”

Recent applicants are five months behind on rent and child support. Credit cards are maxed out. Their cars have been repossessed, which makes it harder to get to work and takes away what has become back-up housing for folks on the brink of eviction. Shelters are full, including women’s shelters for those trying to flee domestic violence. Without childcare or in-person school in the fall, parents fear they won’t be able to return to work – if there’s a job for them at all.

Some 16,000 restaurants have permanently closed since March, and the Independent Restaurant Coalition estimates that 85 percent of the nation’s independent restaurants will be gone.

Restaurants that remain open are not thriving. They have months of unpaid rent. Owners have had to invest thousands of dollars in structural changes to enable outdoor dining and keep guests and workers safe, and many are going into debt just to operate. Take-out, reduced capacity dining, and outdoor seating simply don’t generate enough revenue for restaurants to bring back their whole teams. A recent report from Resy showed that New York City restaurants are seating just 23 percent of the diners they did last August.

It’s clear that America’s vacationing politicians don’t understand or value the restaurant industry, despite the fact that it generates $899 billion in sales, nor do they recognize the growing crisis for America’s 15.6 million restaurant workers. Without a federal plan to back-stop restaurants and provide adequate aid and an employment plan to tap into workers’ skills and desire to work in safe, well-paid jobs, the prospects for most restaurant workers looks increasingly dire.

Will the government do what it takes to adequately support workers? It seems unlikely. Will individual American donors, foundations, and corporations step up again to meet the needs of millions of out-of-work restaurant people? We have hope.

We’ve seen Americans’ generosity before, and we know that the majority of office workers who have continued to work remotely and decreased spending because of sheltering-in-place have actually been able to increase their savings over the past four months.

We need help. We need everyone who loves restaurants to recognize what’s happening to workers and demand that the federal government create a real plan to help our community survive in a new reality where jobs will not return for a very long time. And if the federal government doesn’t act, we hope Americans will again give what they can to help restaurant workers who have spent their careers serving joy to so many.

Readers who are interested in finding the Congressional representatives for their areas can visit the United States House of Representatives website.