The Hit List: New Houston Restaurants to Visit in May 2019 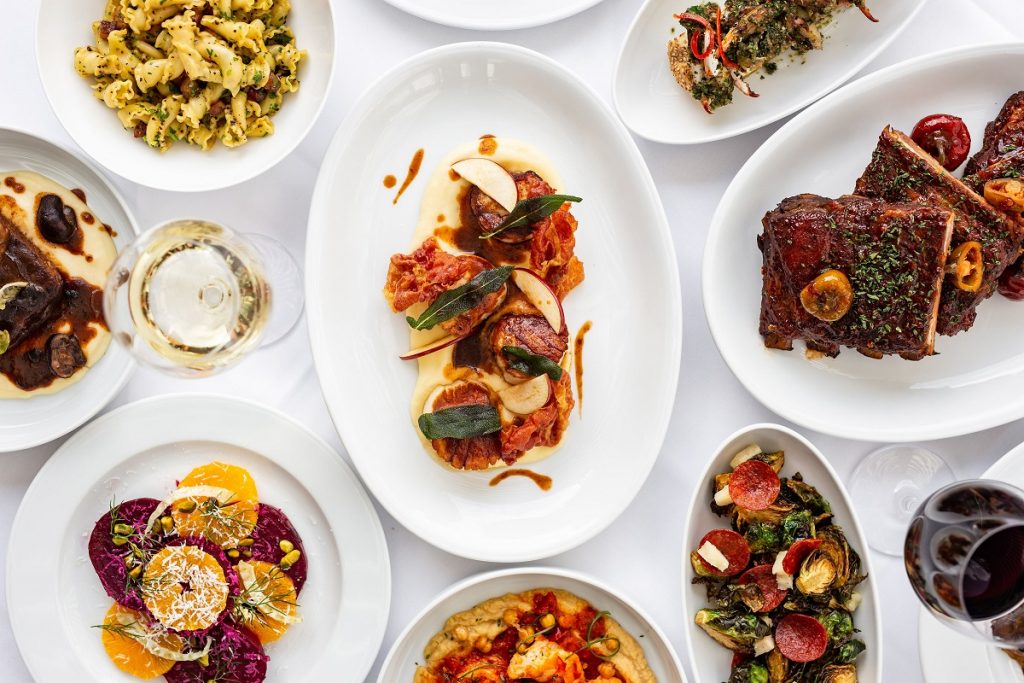 In the mood for Italian? B.B. Italia has you covered. Photo by Kirsten Gilliam.

As Houstonians prepare for our seemingly endless summer, the Bayou City continues to turn up the food-scene heat. B.B. Italia, the latest from local restaurateur Benjamin Berg, is a pasta-lovers dream, the Latin-inspired Tropicales serves its own version of spicy heat, and long-time favorite The Rice Box — which evolved from a food truck — is bringing Chinese-American dishes to River Oaks. Read on for details on these and other recently opened Houston restaurants.

1751 Sea and Bar, 191 Heights: Sambrooks Management Company, the new restaurant group formed by Michael Sambrooks of the popular barbecue joint The Pit Room, has transformed the former Star Fish in The Heights into 1751 Sea and Bar. Sambrooks’s culinary director, Lyle Bento, and head chef, J. D. Woodward, developed a seafood menu that includes Gulf oysters, New Zealand rainbow clams and uni from the raw bar, and the 1751 Charcuterie Board. Rather than traditional meat options, it features salmon gravlax, cured tuna, scallop conserva, pistou mussels, smoked oysters, and boquerones. From the small plates, the Crawfish Soufflé and Char Siu Pork Belly are must-haves but save room for entrées such as the Crispy Snapper and the Tom Yum Hot Pot with lobster, langoustines, rock shrimp, New Zealand clams, mussels and scallops. The gin-focused cocktail program includes sip-worthy standouts such as Gin Lane, a cocktail centered around rhubarb-infused Sipsmith gin, and the Storm’s End, which features apricot-infused ROXOR, a gin developed by Houston chef Robert Del Grande.

B.B. Italia, 14795 Memorial Drive: The latest restaurant from Berg Hospitality Group (the team behind B&B Butchers & Restaurant and B.B. Lemon) is serving hungry Houstonians classic Italian-American fare. It’s housed inside the former Carmelo’s space and now offers diners a brighter dining room as well as a brand-new bar and patio. Open for lunch (with convenient to-go pizza and sub options) and dinner, the menu features appetizers such as the whipped ricotta with Sicilian oregano, olive oil and bread — enough to feed the whole table — and the Bacon Parmigiana, thick cut slices of bacon layered with tomato sauce and mozzarella that first debuted at sister restaurant B.B. Lemon on Washington Avenue. Housemade pastas include traditional dishes such as carbonara and bolognese and new selections like Grandma’s Ravioli stuffed with short ribs and topped with mushroom marsala ragù. Those looking for something besides pasta or Italian classics can try the Italian fried chicken and pork ribs made with a hot Italian cherry pepper glaze.

Decatur Bar & Pop-Up Factory, 2310 Decatur: From Adam Brackman and chef Monica Pope, partners in the original Beaver’s, Decatur Bar & Pop-Up Factory will eventually feature a lineup of rotating chefs-in-residence, offering each one the chance to build momentum for his or her own brick-and-mortar concept. For now, world-traveled chef Evelyn Garcia, who won an episode of Food Network’s “Chopped” and hosted frequent pop-ups around Houston, has been such a good fit that her term as the chef-in-residence is extended for the rest of 2019. The recently updated menu still incorporates her love for southeast Asian fare mixed with influences from her Salvadorian and Mexican background, but now offers walk-in service (versus the four-course seated dinners that were an initial focus — but don’t worry you can still catch those once a month). The dinner menu is divided into sections like The Favorites, Sharables, and Curries. Additionally, Decatur also runs food specials such as Taco Tuesday (by catering company Cochinita & Co.) and Sunday Steak Nights (by pop-up steak specialist Elements) as well a selection of workshop and classes like the upcoming How to Drink Like a Lady (most of the time) with bar manager Leslie Ross Krockenberger.

Kubo’s Sushi and Washoku, 1902 Washington: It has been a little over two years since Kubo’s popular Rice Village location closed, but the restaurant is now reincarnated with a slightly modified name, Kubo’s Sushi and Washoku, and a new location next door to Tacodeli. Under the helm of Yoichi Ueno, the traditional kaiseki-style menu features shareable small plates, entrées (some for duo diners), sushi rolls and sashimi. Familiar items like the Kubo’s Roll — shrimp tempura and spicy mayo topped with fresh salmon, avocado, eel and tobiko — work nicely alongside new, well-executed dishes such as the Hassan (chef’s choice of seven appetizers) and the kamo rosu (roasted duck). Leave room for dessert and order the Red Bean and Matcha. For the moment at least, this new Kubo’s is Houston’s most underrated and under-the-radar Japanese restaurant gem.

The Rice Box, 1111 Shepherd Drive: This is the third location for owner John Peterson’s kitchy, casual Chinese-American concept, joining the Greenway Plaza food court stand and the original Heights brick-and-mortar. It’s in the former Tila’s location in River Oaks, just across the street from Backstreet Cafe. The Blade Runner-inspired space accented with new wave lighting boasts a shaded, outdoor patio and is about three times larger than the Heights location. The larger restaurant means a larger kitchen, which allows Peterson, who runs the restaurants with fiancé Jenny Vo, more room for putting his own unique stamp on classic American-style Chinese food. Standouts include the signature General Tso’s Chicken, Cumin Beef made with 44 Farms meat and chopped green onions; and the Chinese eggplant with green beans in fresh garlic sauce. For some exciting small bites, try the Salt & Pepper Cauliflower and the fried pork dumplings.

Squable, 632 West 19th: This new restaurant in the former Southern Goods space in the Heights is backed by Bobby Heugel, James Beard Award-winning chef Justin Yu and Steve Flippo, but operated by co-chefs Mark Clayton (formerly of Oxheart), Drew Gimma (the opening baker for the original Common Bond) and operations manager Terry Williams. The menu showcases “European fare with American influences”, while incorporating locally sourced ingredients. Taking full advantage of Gimma’s baking experience, Squable features rotating seasonal breads and standout dishes like the Dutch baby pancake made with fresh cheese, black pepper and honey. For entrees, Clayton’s handmade pasta and the Pork Neck Schnitzel take center stage. The menu also includes a dozen or so shareable plates, such as the maltagliati (Italian for “badly cut”) pasta, and big plates such as the schnitzel and half a heritage chicken served with bread dumplings and chicory tossed with a Parmesan-soy dressing. Get more details in our full article on Squable’s opening.

Taste Bar + Kitchen, 3015 Bagby: From the team of chef Don Bowie and entrepreneur Kevin Kelley, comes Taste Bar + Kitchen, which offers elevated comfort food in the midtown space formerly occupied by Sterling House. The menu is dedicated to the classic duo of chicken and waffles and includes choices such as General Tso’s Chicken & Waffles; Jerk Chicken and Waffles made with Jamaican-inspired spices; and the hearty Cheeseburger Waffle stuffed with ground beef, Gouda and cheddar. For more details, read our full article on the opening.

Tropicales, 2132 Bissonnet: The Latin-inspired Tropicales from Greenway Coffee owner David Buehrer, Carlos Ballon of Morningstar, James Beard semi-finalist pastry chef Jill Bartolome and bartender Kenny Freeman, formerly of Julep, is already a neighborhood favorite. Located between Greenway Plaza and Rice University, the café was developed in conjunction with nearby residents Steve and Hilary Ybarra and offers diners a beautifully designed space resplendent with rich wood tones, muted pastels and a full-service outdoor patio. Standouts include the salmon ceviche made with sweet mango and sour red onions in a spicy jalapeño, lime, guava and coconut milk sauce. For cocktail lovers, Freeman has created drinks with Mexican, South American and Asian influences. Try the Powers of Peru — made with pisco, bell pepper extract, lemon, agave and cava. For more details, read our full article on the opening.

Uptown Sushi, 1131 Uptown Park: A staple in the Galleria area, Uptown Sushi closed in September for a major revamp of both the space and the menu. It reopened at the end of February, revealing a brighter, sleeker design. While the current plans retain many of Donald Chang’s popular menu items such as Kobe Cubes — marinated Kobe beef served over crispy rice and topped with a quail egg — previously “off-menu” dishes such as chicken wings, AK Bites and the tuna tataki are now regular offerings. Expect additional new dishes along with a new cocktail menu in the coming months.

Verdine, 449 West 19th: Chef Stephanie Hoban has parlayed the success of Ripe Cuisine — her popular vegan food truck, which can usually be found at Urban Harvest’s Saturday Farmers Market — into a brick-and-mortar location in the new Heights Waterworks. The vegan offerings are already drawing big crowds on the weekends, so get there early. A case in point: the first Saturday of business, the restaurant completely sold out of food by 1:30 p.m. Word is there are now fewer sellouts, but the early bird still catches the most popular dishes, like the Bistro Burger made with an organic lentil-walnut-mushroom patty topped a with roasted red pepper aioli, arugula, tomato, dill pickles, cashew ‘chèvre’, caramelized onions on a locally made wheat bun and the mac n cheese with a nut-free, vegetable-based cheese sauce, gluten-free pasta, and quinoa crumbs. The beverage menu features sustainable, organic or natural wines such as Trere ‘Re Famoso’ White Blend, Ravenna 2017 and Aberrant Cellars ‘Confero’ Pinot Noir 2015, and beer from local breweries like Eureka Heights and 8th Wonder.

Coming Soon: Normally, we’d tell you what we have our eyes on but let’s do something different. Readers, tell US what YOU are most looking forward to! Leave a comment below (we do moderate to keep out the trolls, so give it a little time to appear), join the Team Houston Food Finder Facebook group to start a discussion or shoot us an email. We love hearing from you.