The Hit List: New Houston Restaurants to Visit in August 2019 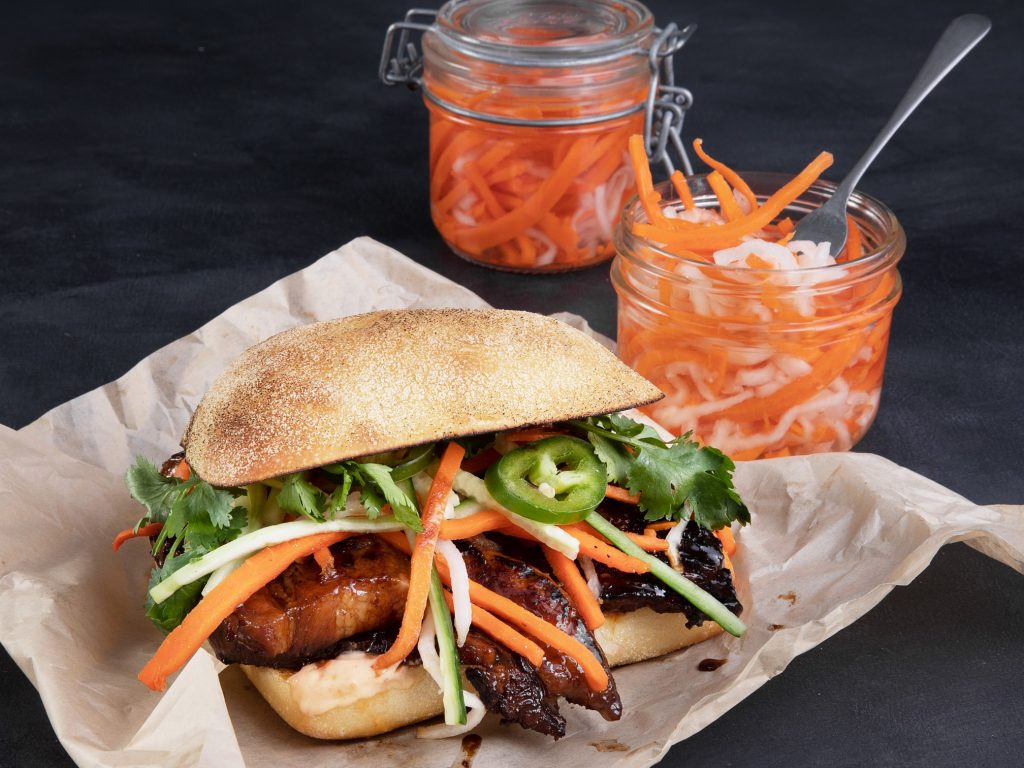 August is here, which means a new crop of hot new Houston restaurant openings is upon us (and even hotter temperatures, to be frank). Ready for exploring are two new downtown food halls, yet another venture from the Bobby Heugel/Justin Yu crew and a sandwich shop transplanted from Southern California. Here’s the lowdown on what’s going on now in the Houston restaurant scene.

B.B. Lemon (Montrose Location), 4319 Montrose: The Berg Hospitality Group, which owns B&B Butchers, B.B. Italia and the original B.B. Lemon on Washington Avenue, is continuing to expand with the opening of its second B.B. Lemon, this time in Montrose. Located in the former Pax Americana space, the new outpost features many of the dishes from the Washington location, while introducing new seafood dishes such as flounder stuffed with creamy mascarpone and crab. Other highlights include D.W.B. Mac & Cheese named after Berg’s brother Daniel Berg, who is responsible for the fresh pasta program at B.B. Italia. Emily Trusler, the executive chef of the original B.B. Lemon, is also helming the new location along with beverage director Monique Cioffi-Hernandez. Cocktail lovers can sip on a Soho’s Banker made with bourbon, turbinado, lemon, egg whites and red wine and Belle of the Ball with gin, lemon, lavender and champagne. Don’t miss the “Lemon Hour” happy hour launching this month. More information — including what writer Carlos Brandon had to say about that mac & cheese — is in our full article on the opening.

Bravery Chef Hall, 409 Travis: It was foodie Christmas in July as Bravery Chef Hall finally opened after 18 months of anticipation. Developed by partners Anh Mai, Lian Nguyen and Shepard Ross, Bravery Chef Hall is home to six restaurants: Atlas Diner by Richard Knight; The Blind Goat by Christine Ha; BOH Pasta & Pizza by Ben McPherson; Cherry Block Craft Butcher & Kitchen by Felix Florez and Jess DeSham Timmons and Kokoro by Patrick Pham and Daniel Lee. Coming in September is the Gaggenau Concept Kitchen (currently called STAGE as in stagiaire, which is French for “trainee”), which will feature a rotating roster of guest chefs. There also three bars serving drinks to compliment the food: Bravery Wine Bar by Shepard Ross, Lockwood Station by David Daquiri and Secret Garden by Jonathan Gallardo. That’s a lot of talent under one roof, so you’ll probably want to visit more than once. For more, read Olivia Flores Alvarez’s full article on Bravery Hall’s opening.

Loch Bar Restaurant and Ouzo Bay, 4444 Westheimer: From the Baltimore-based Atlas Restaurant Group comes Loch Bar and Ouzo Bay in the River Oaks District. At Ouzo Bay, brothers Eric and Alex Smith are offering a menu focused on Mediterranean cuisine. Committed to fresh sourcing, the restaurant flies in fish daily: langoustines from Norway, jumbo prawns from Madagascar, Dover sole from Holland and branzino from the Aegean. While seafood is the menu’s focal point, there are still ample meat selections, such as locally raised lamb shank with toasted orzo and roasted vegetables, as well as steak and chicken dishes. There is also an ample selection of mezes such as the House Spreads served with toasted pita. To accompany the hearty fare at Ouzo Bay, the Smiths tapped local sommelier Evan Turner to develop the beverage program, which features Greek wine and cocktails such as Phanes Poison made with Belvedere citron vodka, honey, basil, and lime and Milos’ Flame with Rittenhouse bonded rye, Cocchi Vermouth di Torino, Lapsang souchong foam and Angostura bitters.

Loch Bar is where the brothers are unveiling one of the largest raw seafood selections in town. The menu focuses on traditional New England fare such as lobster rolls and Maryland-style crab cakes, while also incorporating locally influenced dishes such as Viet-Cajun crawfish. Loch Bar also plans to showcase over 400 whiskeys (at press time, it was at 350 and counting), local craft beers, and cocktails such as The Olive Branch made with The Botanist gin, olive-infused vermouth and salt and the Foregone Conclusion with Tito’s vodka, Pimm’s No. 1, peach, lemon and soda. You can read more about our visit to both.

Mendocino Farms, 5510 Morningside: Last month, the popular California-based sandwich chain opened its first Houston location in Rice Village. Just like the other locations, Mendocino Farms has a ranch-to-table ethos in both its menu and design. The company is utilizing local vendors such as Slow Dough Bread Co. and Cake & Bacon, as well as asking local guest chefs to create special items, such as the Charity Sandwich developed by Chris Shepard for the grand opening (available only through August 18), the sales from which benefit the Southern Smoke Foundation). Other sandwiches, such as A Sandwich Study of Heat made with roasted turkey breast, smoked gouda, smashed avocado, chili aioli, and jalapeno relish and the Peruvian Steak Sandwich with Oaxacan cheese, herb aioli and steak marinated in spicy aji amarillo, take center stage at Mendocino. However, remember to save room for the stellar sides. The marinated red beets and quinoa and the spiced curried couscous are both excellent choices.

Penny Quarter, 1424 Westheimer: Penny Quarter, located in the former Etro space behind Anvil, just opened on Monday, August 12. After opening Squable, owners Justin Yu and Bobby Heugel, along with partners Steve Flippo, Terry Williams, wine director Justin Vann and coffee director Alex Negranza, focused on finishing Penny Quarter. Billed as an all-day cafe and bar, it is open daily from 7 a.m. to midnight Sunday through Wednesday, and until 2 a.m. Thursday through Saturday. It’s going to be a few weeks before it starts serving food, but the menu will consist of roughly a dozen morning dishes like the breakfast salad with hard boiled egg, marinated tomatoes, kale and sprouts and around eight to ten evening selections like the fried chicken sandwich with sprouts and zhug and the bistro steak with fried eggs and salsa verde. For now, Vann’s impressive wine list is available all day, with drip coffee service available after 3 p.m.

Reef, 2600 Travis: Almost two years after Harvey forced the closure of this local favorite, Reef reopened its doors this past month. Chef-restaurateur Bryan Caswell gave the restaurant a a new look, but as Houston Food Finder-founder Phaedra Cook noted, one thing hasn’t changed: Caswell’s intense focus on Gulf seafood.  New dishes like the Crab Fat Dough starter and Snapper in an Envelope with grapefruit, hon-shimeji (brown beech mushrooms) and herb salad have been receiving high praises from Houston diners alongside familiar dishes like Caswell’s seafood gumbo. From the bar, Reef offers cocktails like the Hemingway Daiquiri with white rum, maraschino, lime and grapefruit and Purple Drank with gin, lime and grape soda as well as a selection of wine and craft beers.

Warehouse 72, 7620 Katy Freeway: Warehouse 72, the upscale sibling to downtown’s Spaghetti Warehouse, which was destroyed by Hurricane Harvey, recently opened in the Marq-E entertainment center. The new location blends its Italian-American roots with a modern bistro design and a more sophisticated menu. The only items carried over are the spaghetti and meatballs and the Italian Wedding Soup, although some of the old-school favorites may be available in the future as specials. Highlights on the new menu, under the direction of executive chef Jaime Salazar, include and a selection of handcrafted pizzas, red wine-braised short rib ragout with pappardelle, and Mediterranean grilled octopus served with crispy smashed potatoes, Spanish chorizo and salsa verde. At the custom-made bar, guests can order cocktails like Warehouse’s Nonconformist — a take on the traditional Old Fashioned — and over 25 wines by the glass.

Coming soon: We already have our eyes (and stomachs) focused on Traveler’s Table, Toasted Coconut, and Postino Montrose.