First Bite: “World Traveler” Restaurant in Montrose Has a Careful Path to Tread 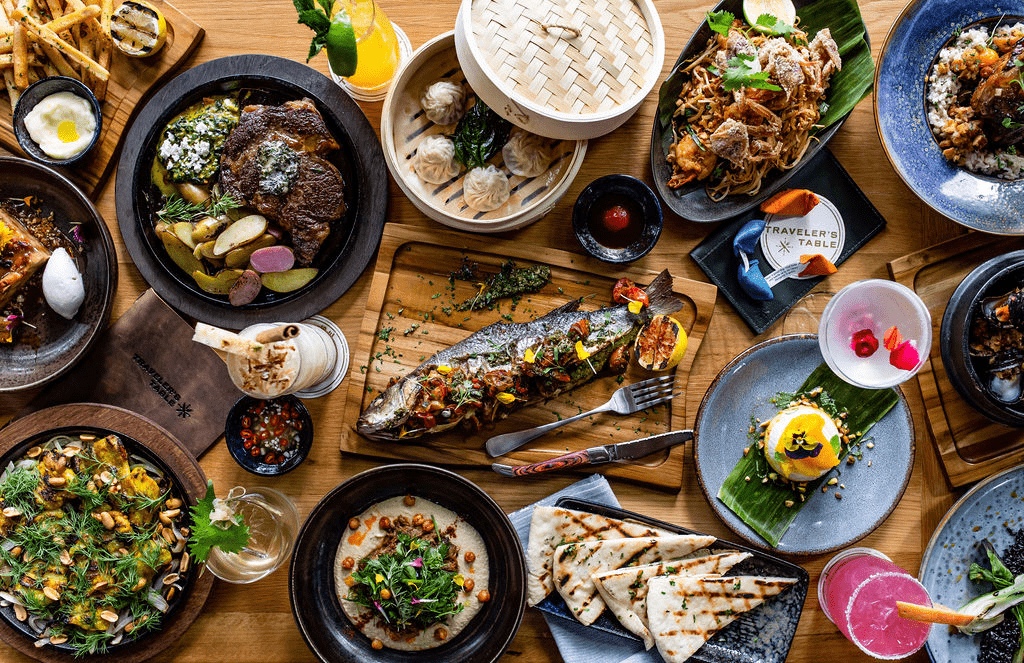 The spread at Traveler's Table. Photo by Kirsten Gilliam.

In the 1980s, Banana Republic evoked pseudo-safari nostalgia: khaki safari jackets, khaki paratrooper bags emblazoned with red wings, khaki flight suits, khaki fedoras — enough khaki to dress all the stars and all the extras in all the Indiana Jones movies, which were popular then and probably the point. The armchair adventurer was the market.

With its brown headers, faint impressions of passport stamps, a Hemingway quote and a hodgepodge of global dishes, the menu at Traveler’s Table — the restaurant that just opened in the former Aqui location at 520 Westheimer — at first elicits the same off-kilter, colonial travel lodge atmosphere.

It’s unfair to judge a new restaurant solely on its menu, website and marketing materials, but we as consumers are asked to do just that, at least at first. With over 10,000 restaurants in the Houston area and many new ones opening every week, there’s an overwhelming amount of information to sift through to find a place to eat: reviews, word-of-mouth recommendations, reports on openings and closings, websites, menus, signage, and social media.

As someone who has seen firsthand the often herculean efforts it takes to open a new establishment and keep it running — the maxed-out personal credit cards, the 20-hour work days, the struggles to balance ever-increasing operating costs with diners’ expectations about prices and quality, the seemingly endless maintenance — I want to give everybody the benefit of the doubt, a long grace period and the opportunity to succeed.

With that said, Traveler’s Table feels more like a “concept” than a restaurant. Shortly after it opened, I walked into the sparse main dining room that thankfully avoided the clichéd, exploitative trappings one might expect in this setting: statues of Buddha and Ganesha, black-and-white photos of indigenous people, Olmec pottery or colorful prayer flags. Two smaller rooms featured a wall each adorned with tan baskets, straw hats, antique-style drawings that looked like they were taken from 19th-century travelogues and wooden trinkets one might find in tourist markets.

The friendly hostess led me to a booth and I slid onto one of the muted green benches with vertical swaths of cloth that seem to be tastefully inspired by textile patterns from East Asia and Africa. She handed me a leather-bound menu.

Traveler’s Table’s stated philosophy sounds appealing, too: “Here, we believe that food can serve as a gateway for learning about other cultures, for fostering understanding, and for breaking down the barriers that divide us as citizens of the world.”

I agree with those beliefs, but I have to wonder if a high-end restaurant, located in one of the most expensive neighborhoods of one of the most diverse cities in the United States, is the best place to accomplish those stated goals. It’s too easy to over-romanticize the impact a meal or two can have on our understanding of the people who created a cuisine. Many towns and cities in the United States have at least one Mexican restaurant, as I witnessed on a recent road trip from Houston to St. Louis, but that hasn’t necessarily led to a better understanding of Mexicans or Mexican-Americans. However, a meal can definitely be a friendly starting point for exploring both our cultural differences and similarities.

Some items on the menu seem problematic. India and the Mediterranean are grouped together as a “region.” Truffle oil and aioli are overused. A “farmer’s market” salad features produce that is either not in season or not grown at all anywhere near Houston. As a whole, the menu is unfocused and derivative of other area restaurants.

Traveler’s Table’s claim that it will make dishes from such a wide variety of cuisines “more flavorful” than the “traditional recipes,” whatever those might be, is not only a tall order, but vaguely insulting and arrogant, especially in a city that has excellent restaurants such as Mala Sichuan, Shri Balaji Bhavan, Hugo’s, Pho Binh By Night, The Original’s Ninfa’s, The Pit Room, Reggae Hut, Kata Robata, Giacomo’s and Cedar’s Bakery — a list that just scratches the surface of the many good restaurants in Houston that are serving food from many of the world’s culinary traditions.

I’m not authenticity purist or opposed to what is now often derogatorily referred to as “fusion.” How could you be in Houston? Here, so many cuisines and cultures rub shoulders, creating dishes such as Partha-dilla (Indian quesadilla) and fried chicken marinated in Indian spices at Himalaya; Brisket Fried Rice, Brisket Burnt End Steam Buns and Smoked Turkey Bánh Mì at Blood Brothers Barbecue; Viet-Cajun crawfish and boudin kolaches all across the city; Crawfish Etouffée Nachos and Gumbo Tacos at EaDeaux’s; Barbecue Brisket Tamales from JQ’s Tex Mex BBQ; and Trompo Quesadilla on naan served by La Marco. Those are just a few of the unique dishes found in the Bayou City that were created by melding — or fusing — ingredients and techniques from disparate cuisines.

Traveler’s Table definitely has the potential to fit into this fertile culinary landscape. Other restaurants with similar eclectic approaches have found a foothold. Mastrantos, with a focused global menu forged from the owners’ Venezuelan roots and the chefs’ Mexican culinary heritage, has found a niche in the Heights. At Andes Café, chef-owner David Guerrero successfully explores the many cuisines of South America, and will soon continue those explorations at Alma, his forthcoming restaurant in Highland Village. Just down Westheimer at UB Preserv, chef Nick Wong has been thoughtfully applying his extensive culinary knowledge to dishes inspired by the many international cuisines that have found a home in the Greater Houston area.

Traveler’s Table is entering a crowded and competitive market, one that will take considerable savvy and many well-executed dishes to successfully navigate. Owner Matthew Mitchell and his team — especially his general manager Austin Moreno, who has 13 years of international experience and was professionally orchestrating the floor the night I was there — seem poised to face these challenges.

Did the food I had that night live up to the ambitious goals? Though it showed promise, it didn’t. Phở Soup Dumplings encased flavorful ground pork, but the thimble of phở contained in each one fell flat — especially compared to the complex, aromatic broths you can find elsewhere in Houston — and the crispy basil garnish was flavorless and limp. The Smoked Chicken Arepas lacked the promised smokiness. A competently executed, yet unexciting, salmon tartar was elevated by a wonderfully crisp housemade rice cracker. The Mango Lassi Panna Cotta lacked any inkling of the richness of a good mango lassi, only offering hints of cardamom and a tough, inedible garnish.

The most promising dish of the night also revealed the restaurant’s biggest challenge. When I asked a staff member what their favorite entrées were, they steered me toward the khao soi and, interestingly, the dishes on “The Americas” section of the menu: hangar steak and scallops. I chose the khao soi.

A few minutes later, I was presented with an eye-pleasing (a trait most of the dishes shared) bowl of yellow  soup topped with green and red onions, drizzles of red chili oil, a dark purple pansy and a mound of what looked to be crispy noodles (which sadly were once crispy noodles that had wilted to an unpleasant rubbery texture). The chicken was tender. The broth was flavorful, though it leaned toward the overly sweet but hits of heat pushed the bites toward balance. This was a dish I’d be willing to try again.

The next day, for comparison’s sake, I tried the khao soi gai at Street Food Thai Market, a neighborhood restaurant and grocery in the Heights. It is a thing of beauty. The rich, creamy nuanced soup weaves fragrant toasted spices with an impeccable level of heat and is threaded with tender chicken and poignant mustard greens that are topped with perfectly crisp noodles and fried shallots, adding crunch to every bite. The Traveler’s Table version, while still good, just doesn’t compare.

This is the challenge. Houston-area diners are a diverse, sophisticated bunch who have been exposed to a wide-variety of cuisines since at least the early 1980s. Our neighborhoods are dotted with restaurants tucked into strip malls that feature cuisines and dishes from all over the world. You are likely to find a perfected version of most of the dishes on the Traveler’s Table menu somewhere that’s been serving it for much longer.

There are fine lines between cultural appreciation, cultural adaption and cultural appropriation. In Houston, where a single strip center on Richmond might be home to a Middle Eastern restaurant, a Vietnamese eatery, a Colombian bakery, and a taco truck, that line, at times can be very blurry. Our diners — like the diverse group at Traveler’s Table the night I stopped by — are open to a chef at a high-end American restaurant incorporating Vietnamese flavors, a Vietnamese restaurant serving spins on Cajun food and a Trinidadian chef experimenting with Polish dishes. So Houston’s gracious diners will likely be open to trying Traveler’s Table — and should be.

The food shows potential and the missteps could be chalked up to the usual early kinks many new restaurants experience. A few tweaks, menu edits and sweating a few more details could result in some really good dishes crossing the pass. The staff, which was as diverse as the clientele, was attentive and nimbly corrected a problem with my arepas, which they spotted before it left the kitchen. That is evidence that they have the skills to navigate the challenges they have set for themselves.

Though Traveler’s Table shows promise, its eclectic approach could just as easily come across not as vibrant and interesting but as generic as Cheesecake Factory and as culturally insensitive as Banana Republic in the 1980s.

With a deft, thoughtful and sensitive approach, food that lives up to the team’s promises, and a willingness to evolve with Houston’s dynamic dining scene, Traveler’s Table can be successful. I hope so — and that the restaurant’s mission statement, proves true — because I look forward to better cultural understanding, breaking down barriers and trying pad thai with soft shell crab.