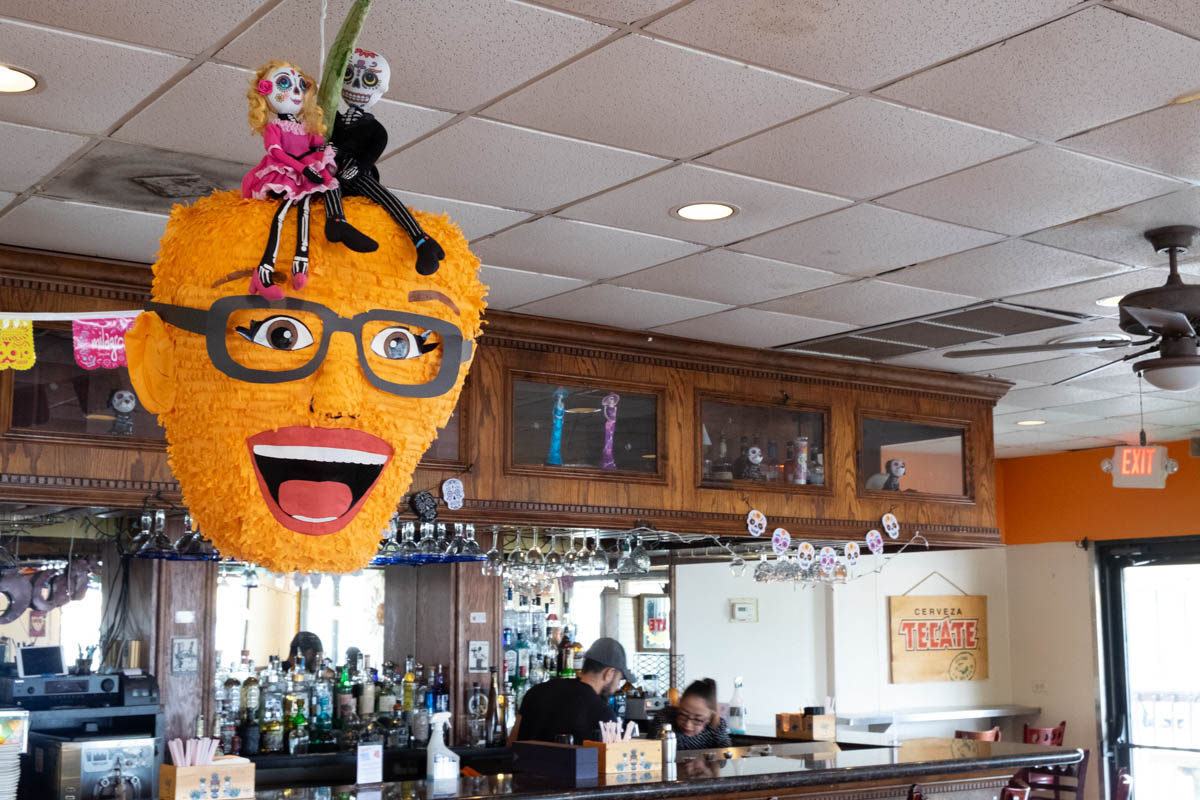 Our real question is whether the custom-made Habanera pinata is staying or going. Photo by Phaedra Cook.

Habanera & The Guero at 9902 Gulf Freeway, which is owned by Vanessa Lomeli and Ben Downing, received a $10,000 makeover from Food Network show “Restaurant: Impossible“, as well as from craftspeople and fans recruited to help. Tonight, the resulting episode — the first of “Restaurant: Impossible” season 17 and entitled “Fixing a Family in Houston” — will show what happened when host and chef Robert Irvine visited the restaurant and revamped the space and menu. The episode will first air is at 8 p.m. Central Time, and then again at 11 p.m.  A preview of the episode is below.

The restaurant has earned many fans during its five-year tenure, including Alison Cook, the Houston Chronicle’s food critic, who reviewed it (under its prior name, Habanera & The Gringo) in 2015. From 2016 through 2018, Cook also placed it on her Top 100 Restaurants list. However, the episode description claims there has been conflict between the owners as well as financial hardship:

“Buried in debt, Habanera and the Guero in Houston, Texas, is on the verge of closing. The infighting is destroying the business and a 3-year-old daughter is stuck in the middle. Robert Irvine will have to convince the owner, Ben, to step back from the obsessive control of his partner and chef, Vanessa, and concentrate on the rest of the restaurant, or Ben will lose both his business and his family.”

In the video preview, Downing states, “If things go as they are, we’ll be closed in a month.” Spoiler alert: Fortunately, the restaurant is still open. The episode, though, does look like it’s full of personal drama. Dishes are shattered, Lomeli is in tears, there are intense conversations and, of course, at one point Downing and Irvine are yelling at each other in the kitchen.

Lomeli has told us that she’s not allowed to discuss the episode or any of the behind-the-scenes details until after the show airs. However, she is an upcoming guest on our Houston Restaurant News Today podcast and we hope to hear more about filming the show and making over the restaurant at that time.

Habanera & The Guero’s menu is based on Lomeli’s family recipes, which she learned growing up in El Paso. Since that Texas city sits at the border of both Mexico and New Mexico, there are multiple culinary influences at work. Habenera & The Guero’s food is not strictly Tex-Mex. Dishes such as Beef Cheek Tostadas, Enchiladas Rojas (based on Lomeli’s grandmother’s recipe) and Rajas Con Crema are just a few dishes that show off the menu’s diversity. And yes, there are margaritas and great queso, as well.

Both before and after the remodeling, consumer reviews on Yelp (which should always be considered with some skepticism) have been overwhelmingly positive. Although, it does appear that more recent reviews are more critical and demanding, possibly due to the publicity and resulting high expectations. It seems the menu has also been streamlined, so some customers have been disappointed to see their favorites disappear. Habanera & The Guero currently has a four-out-of-five star rating, and considering the difficulties the COVID-19 situation has caused, including forcing all restaurants to close dining rooms and turn to a to-go and delivery-only model, that’s really not bad at all. In fact, it’s pretty darn good, right up there with Houston classics such as Hugo’s and Da Marco.