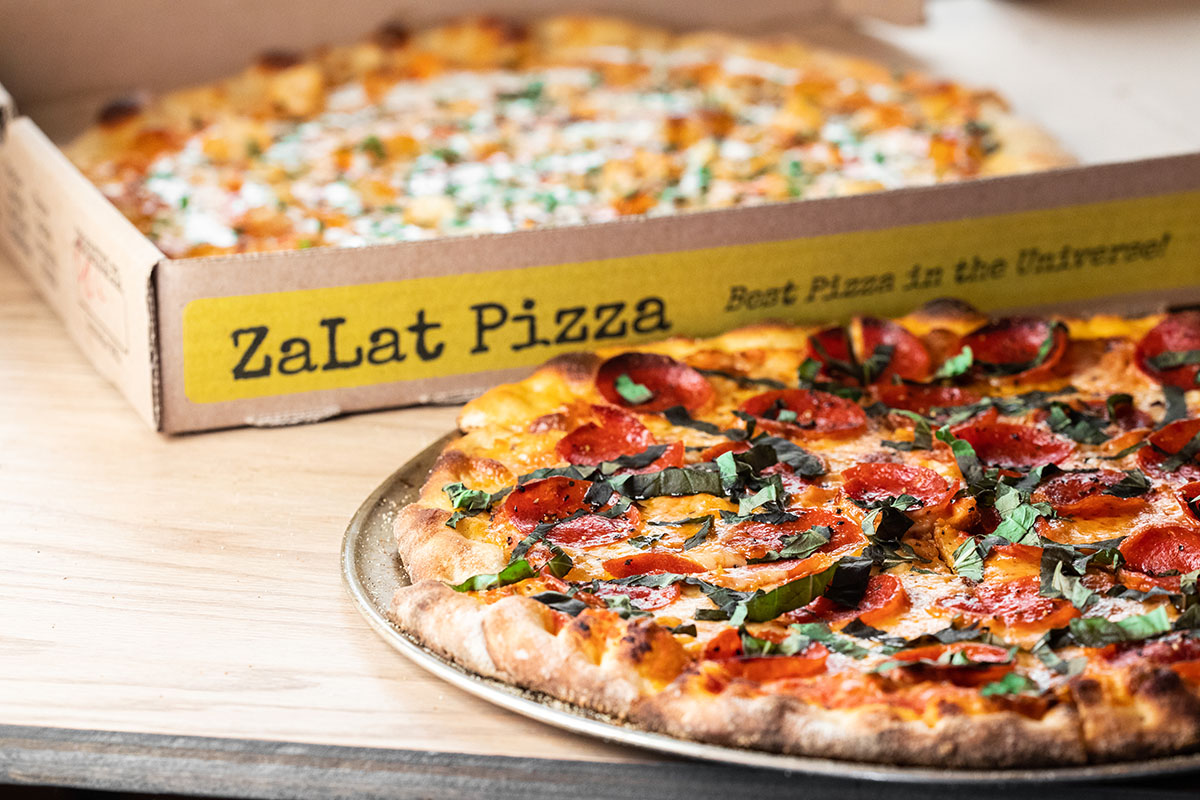 Zalat Pizza's Simple Basil pie with a Buffalo Chicken in the background. Photo by Kathy Tran.

Support informative articles like this one for only $25, and we’ll send you a gift! Limited supply available; click for details.

Khanh Nguyen, a Klein Forest High School and University of Houston graduate, first started Zalat Pizza in 2015 after relocating to the Dallas-Fort Worth area, and it wasn’t until December 2021 when he returned to open one in his former hometown. Clearly though, Nguyen is betting big on the Bayou City, as there are already five additional Zalat Pizzas in the Greater Houston area, and a sixth coming to Memorial City. Now, two nearby towns are the sites of a new joint venture with Kroger grocery stores. Zalat Pizza is opening in-store locations, first at Cypress Towne Lake Marketplace at 9703 Barker Cypress on October 21 and then at Conroe Marketplace at 341 South Loop 336 West, in December.

These are the first two of what could be Zalat Pizza stores within Kroger and other grocery store brands that Kroger owns across the country. (The company owns numerous grocery store brands, and might get even larger soon, as it is trying to buy Albertsons. The deal could be finalized in 2024 if not halted by anti-trust regulations.) New ones are set to be announced in January.

The in-store locations will fulfill pickup, delivery and in-person orders, but will not have dine-in areas.

“As we continue to promote Kroger as a destination for superior food offerings, the opportunity to collaborate with Zalat Pizza, one of the hottest rising stars in the restaurant industry, was very appealing to us,” said Garret Fairchild, Kroger’s corporate merchandiser for deli and bakery departments. “We believe that offering customers convenient pickup and on-demand delivery access to Zalat’s delicious handmade New York style pizza creations will be a much-welcomed addition to our local Kroger communities.”

Nguyen emigrated to Houston as a refugee in 1975 after the fall of Vietnam. After graduating from the University of Houston, he started his professional life as a corporate attorney in Dallas but also had a big interest in starting his own restaurants. In addition to Zalat Pizza, he owns DaLat, which offers Vietnamese-American fare, cocktails and karaoke. Zalat came next, and he’s quickly grown it to 24 locations in the Dallas and Houston areas.

Zalat Pizza’s features include late-night hours (at its stand-alone locations; the midtown Houston one is open until 4 a.m. on Fridays and Saturdays, 2:30 a.m. on Thursdays and midnight the rest of the week), a quirky image (staff members are called “Zealots”) and scratch-made pizzas. The company claims it spends more on cheese per location than rent, uses all-beef pepperoni (good for those who avoid pork) and makes its own dough as well as Roma tomato and fresh basil pizza sauce.

Considering the new Kroger partnership, Zalat Pizza now appears primed to grow exponentially. “Kroger is the largest grocery retailer in the world with over 2,500 locations among its many iconic brands, and we are elated to partner with them on this project,” said Nguyen via press release. “We are especially excited that Kroger is interested in us because of our best-of-class quality and dedication to our craft. Our model has always been about maintaining the highest levels of execution at large scale.”