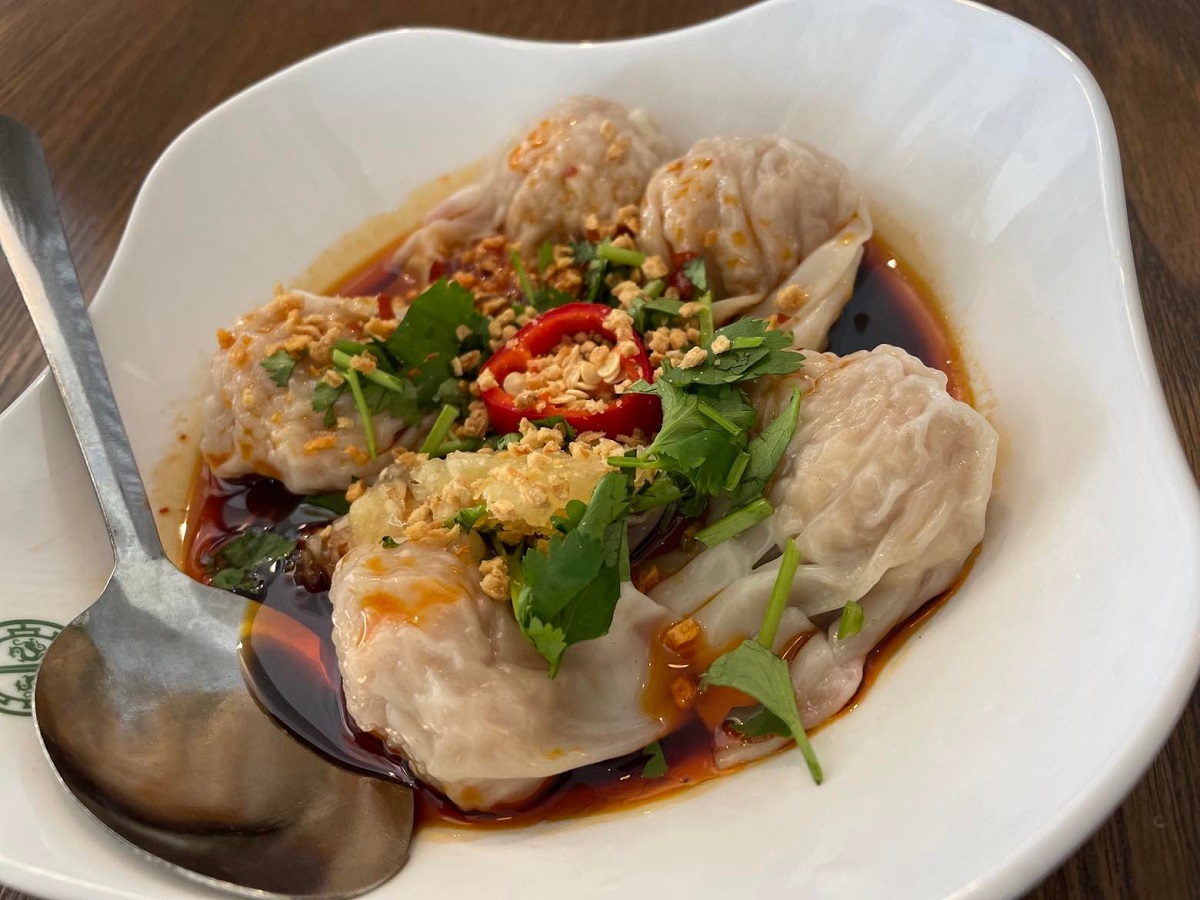 Dumplings in a hot and sour sauce at Tim Ho Wan. Photo by Ryan Baker.

Since it was first announced in 2019, dim sum enthusiasts have been waiting patiently for the Houston-area outpost of Tim Ho Wan, the “World’s Cheapest Michelin-Star Restaurant.” It originated in Hong Kong, and the new spot is located at 23330 Grand Circle Boulevard in Katy Asian Town. The restaurant is now open as of November 7, and Houston Food Finder was in attendance for a special preview lunch hosted by the restaurant’s founder, chef Mak Kwai Pui. For the preview lunch, we were presented with a fixed menu showcasing 11 popular dishes.

A friend fittingly described dim sum as the “Chinese equivalent of Spanish tapas.” Often associated with dumplings, dim sum is actually a broad category of small bites. In a city like Houston, with dozens of great dim sum-focused restaurants, there is always a possibility that some Houstonians are unfamiliar with it. That said, based on what was served, Tim Ho Wan seems to focus heavily on traditional dim sum dishes in an exceptional manner instead of trying to go over-the-top with exclusive creations. This approach makes Tim Ho Wan an easy and authentic introduction to this style of dining.

The restaurant is particularly known for its signature baked BBQ pork buns, which are non-traditional. The dough is thin and stiff with an intense buttery flavor and topped with a sugar crust, similar to pan dulce. The buns are stuffed with a type of barbecue pork called char siu, which is tossed in a glaze often made with hoisin, oyster and soy sauces.

The savory congee with pork and preserved egg was a personal favorite. Congee is a rice porridge, which in this case was served in a savory fashion. Although preserved eggs can be intimidating for the uninitiated, congee is a perfect conduit for those curious to try them. The diced bits of pork and the thick porridge soften most of the eggs’ salty flavor and downplay the color of the whites, which darken due to the lye used in the preservation process.

Next came a series of steamed dishes, including the familiar shrimp and chive dumplings in clear “crystal” wrappers, wontons swimming in a hot and spicy sauce of garlic-chili oil, bite-sized shrimp dumplings (har gow) and beef balls in bean curd skin. Another personal favorite was the siu mai. The combination of textures created with ground pork and minced shrimp melted apart when I took a bite, and the chewy wrapper and dried goji berry topping added extra layers to the texture while minimally interrupting the flavor. It was one of the most enjoyable bites of the meal. The sticky rice wrapped in lotus leaf was large enough to be an entrée on its own. Once unwrapped, it released a pleasant, earthy aroma that filled the immediate area. Sticky rice tends to be chewy, but Tim Ho Wan’s is fluffy and laden with additions of chicken and Chinese sausage tossed in a gently salty-sweet sauce.

The last round of dishes served for the special preview meal included spring rolls filled with shrimp and egg whites. Unlike Vietnamese spring rolls in soft wrappers, Tim Ho Wan’s are fried, with a crunchy and flaky snap. Accompanying the spring rolls was a fork-tender pan-fried turnip cake with bits of finely chopped pork mixed in. To finish the experience, there were lava custard sesame balls. If you have a sweet tooth, beware: these are tasty, but the sweet custard filling lives up to the name as it is molten-hot.

The build-out for Tim Ho Wan is still being completed, but it should open in a few weeks. The hosts warned us about the lack of decor, but as it is, the interior already exudes more style and coherent branding than many other restaurants. Most of the bowls, plates and soup spoons feature the company’s logo. As of the visit, the ceilings have a shallow coffered pattern with symbols stamped into most of the squares. Additionally, the doors leading to the private dining areas are massive and rounded, similar to Moon Gates, suggesting that when completed the overall restaurant will be quite ornate.

Tim Ho Wan’s operating hours are not yet posted, but keep an eye on both our news and the restaurant’s Instagram feed to keep up with developments.