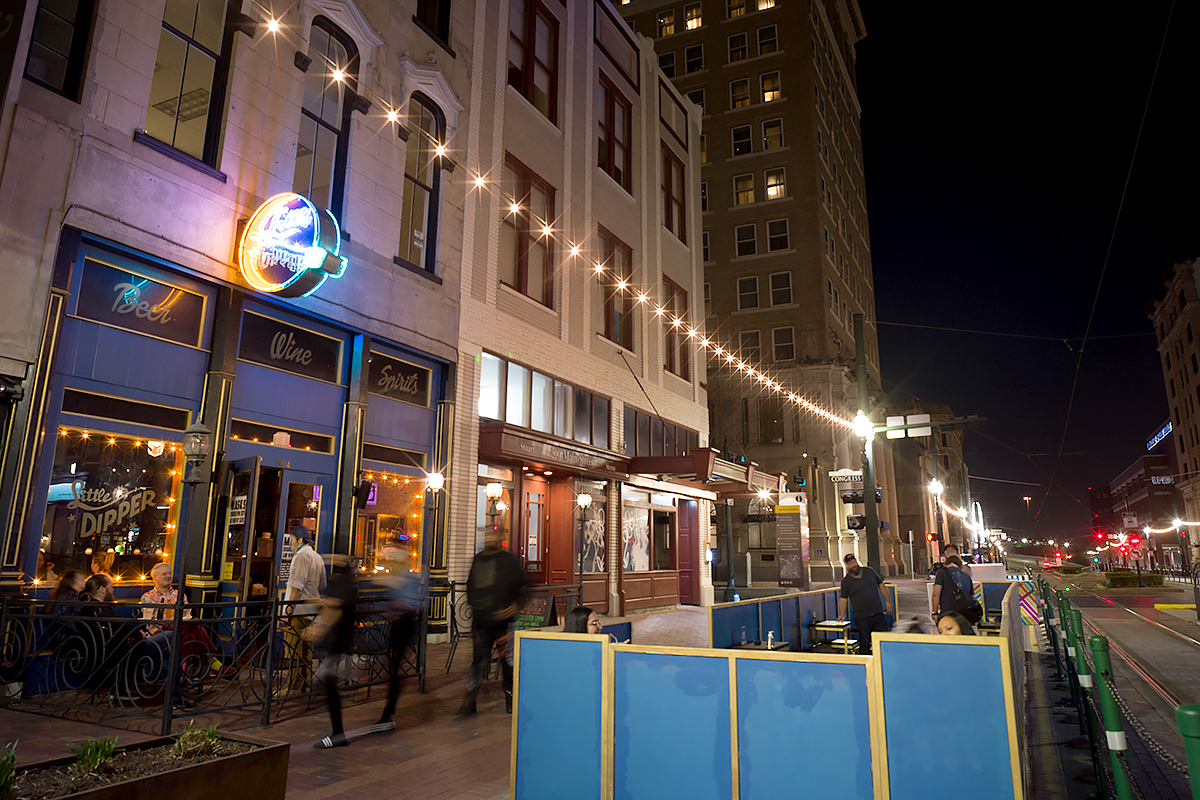 Update, 3/15/2021, 11:44 a.m.: The first street patio is now open at Little Dipper, the bar located at 304 Main near Congress. According to a representative, two other patio applications are pending, but the business names aren’t being revealed until the applications are approved.

Let’s face it: it’s never been pleasant to drive down Main Street, even before the Metro Rail made it an even more complicated (and sometimes dangerous) proposition. The roadway is narrow and it’s only feasible to make right turns off of Main so as to not cross over the rail line. So, it makes perfect sense to repurpose downtown Houston’s central thoroughfare — at least for now — into outdoor dining areas. The measure both helps keep Houstonians safe and gives the bars, restaurants and food halls that line the road a fighting chance while the COVID-19 pandemic persists.

The city program is called More Space: Main Street and closes the blocks from Commerce to Rusk until at least March 31, 2022. While drivers won’t be able to travel down Main, the cross streets remain open, so they can still go over Main to get to their destinations across downtown. According to a representative for the
Houston Downtown Management District, “The program is currently in the submission stage (restaurants/businesses have to submit their plans and be approved), and we imagine the first few will open mid- to late-January.” Prospective business participants can review the guidelines and apply to the More Space: Main Street program online.

Houston is following in the footsteps of other cities that have already implemented similar programs in areas densely populated by restaurants and bars, including Chicago and New York City. While mid-January seems like an inauspicious time to try and coax patrons into outside seating, unlike those other cities, Houston’s winters are comparatively mild and rarely punctuated by snow or single-digit temperatures.

Business owners who want to set up street patios have to do so at their own expense, and it’s inevitable that early adopters will have to invest in space heaters as part of the setup. Some of the requirements include enclosing the street patios with wood and/or metal fencing, entrances to the patios from both the sidewalk and roadway (for Americans with Disabilities Act access compliance) and some type of physical separation from the METRORail line that runs down Main, such as fencing or planter boxes.

For owners of the businesses that line Main Street, such as Asa Hanrahan of Flying Saucer Draught Emporium at 705 Main and Scott Repass of Little Dipper at 304 Main, the More Space program will be a welcome respite after 2020, a year that devastated many small bars. Compounding the issue for downtown bars: many workers were no longer reporting to their offices and instead working from home. “There was just nothing going on downtown,” said Repass. “Little Dipper was closed since the second shutdown in June. If it weren’t for the generosity of our landlords, we’d be gone.” Little Dipper was finally able to relicense as a restaurant and reopen with food — such as street tacos made on the patio — on December 11. Hanrahan says that Flying Saucer is also now operating under a restaurant license and that he’s already submitted his street patio plans to the city.

Fellow Main Street bar owner, Bobby Heugel, who operates The Pastry War and upstairs cocktail bar Tongue-Cut Sparrow (temporarily relocated to the former Penny Quarter space behind Anvil in Montrose), credited Repass with helping spearhead the request to make more outdoor patio space available. Repass modestly sloughed off the compliment — but says he was indeed one of the first business owners to start pushing for it. “I take full credit for everything good that happens in Houston,” he joked. “The way I’ve been putting it is that I can cry on demand on the phone. I wouldn’t say I spearheaded it, but I was one of the first ones to start that conversation. It’s really complicated, as you can imagine, with the city, the fire department, METRO, the police department — there are just a whole lot of moving parts — and it’s frankly amazing that they got it done. I always say, ‘Never let a crisis go to waste,’ and this was a perfect example of something that I think a lot of people wanted to have happen. This was a good opportunity to say, ‘Hey, we really need this’.”

Repass also credits Houston Downtown Management District President Bob Eury and Angie Bertinot, Director of Marketing & Communications/Retail Development, as key players in getting the deal done. “If I was an impetus in anyway, it’s because I kept calling Bob and saying, ‘Hey, we’re desperate. We’re going to die.’ Bob and Angie did all of the groundwork and got this done.”

Hopefully, downtown residents and visitors will embrace the new street patios as they start to appear and lend the financial support needed to prevent more area businesses from closing.