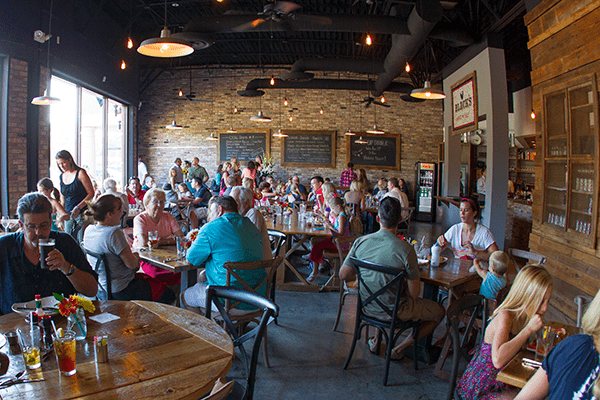 Black’s Market Table at 11550 Louetta announced on Facebook that its last day of business is on July 13. Chef Bart and Rachele Black opened the critically-acclaimed restaurant five years ago. Its southern home-cooking sensibilities, paired with a farm-to-table perspective, helped it stand out from other restaurants in this suburban area. (While technically it has a Houston address, it’s just outside of Cypress.)

The question is why. It has a four-star rating out of five on Yelp and Google and a 4.7 out of 5 on Facebook, so clearly diners mostly enjoyed their experiences. Black’s Market Table, with its fried chicken nights, deviled eggs, huge crispy onion ring, steaks and craft beer was a neighborhood favorite and often packed.

At least, that was the case until Hurricane Harvey.

According to the Blacks, the closing is a late casualty of the storm. The flooding that Hurricane Harvey brought with it had a domino effect. “Unfortunately, after Hurricane Harvey came through, we experienced a 30-percent decrease in sales,” said Rachele Black. “We had hoped [that business] would build back up, but with HP being out of its offices for eight months due to flooding, and then ultimately moving, chances grew slimmer.” Previously, HP (which has since split into HP Inc. and Hewlett Packard Enterprise) took up much of the sprawling campus that was formerly the home of Compaq. With the companies’ thousands of employees no longer in the area, that means fewer people with incomes who can patronize the restaurants.

The nearby residents’ wallets seemed to get slimmer, too. Black thinks it could be due to changing eating habits. Of course, the severe flooding damaged several homes and that’s potentially also a factor. It’s hard to justify eating at even a modestly priced restaurant for those who are still trying to figure out how to afford new flooring. No matter what the reason, the upshot is that more customers started reserving meals at Black’s Market Table for special occasions.

“Without a marketing budget to go after new clientele and boost our messaging, we have not been able to rebuild our sales,” says Black. “We’ve taken on so much personal debt in hopes things would build back up and ultimately can’t continue to incur more.”

There was yet one more detrimental factor: the continued influx of chain restaurants. In addition to the usual-suspect fast food places, recent chain restaurants that opened near Black’s Market Table over the past few years included Hopdoddy, Salata, Black Walnut and PDQ. “It saddens us greatly that it is so hard to compete with the franchises and their scaled buying power and seemingly unlimited resources,” said Rachele.

Will the Blacks ever start a restaurant again, perhaps in a different area? “Never say never!” said Rachele. “We’ve learned so much along the way, it would almost be a shame not to.”