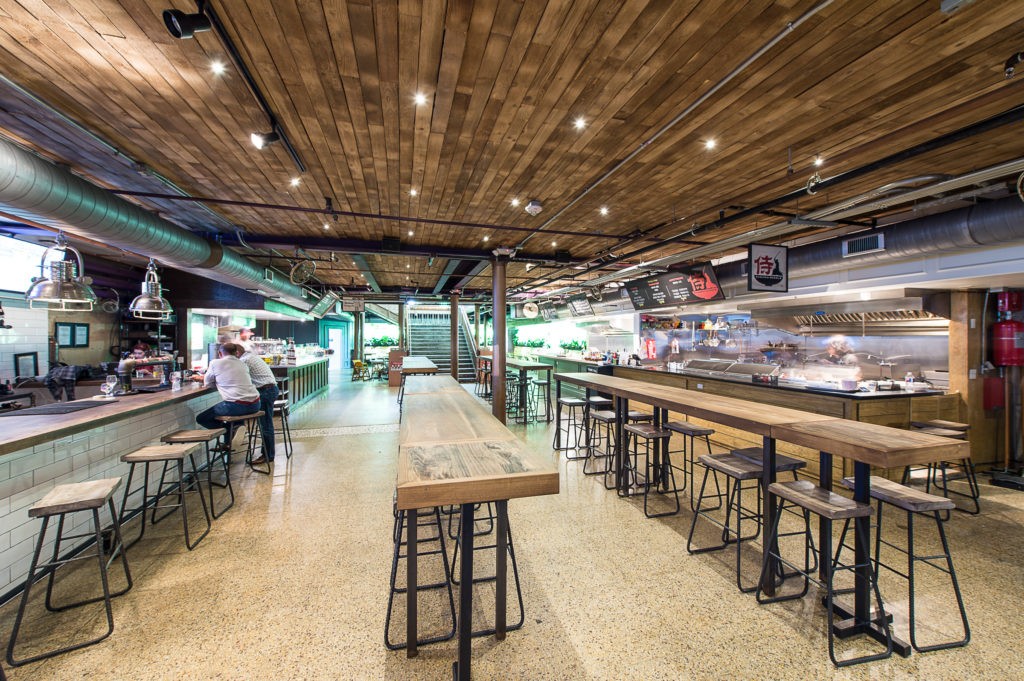 The address of 1010 Prairie will always have a claim to fame: it was the site of Houston’s very first food hall. As first reported by the Houston Chronicle, both Conservatory, owned by Anh Mai and Lian Nguyen, and next-door burlesque supper club, Prohibition Theatre, are slated to close after New Year’s Eve. Both businesses are being relocated to 2118 Lamar, the space that currently houses Chapman & Kirby.

“We had one lease [for both businesses] and it was up,” said Mai. “Many factors led to the decision to move, including the 100-year-old building. We loved downtown, but that was a challenge.” Maintaining the facility did indeed seem problematic, as back in March, Conservatory had to close due to plumbing issues. According to the Facebook page of one of the vendors, aRTe Pizzeria, there was also “unexpected maintenance” that caused Conservatory to close one weekend in November.

Mai says the company is working with the existing Conservatory vendors so that they can continue doing business. “They were notified as soon as we could,” he said. “We are working with each to move them to a space they can make money until the new location opens.”

That said, some of the food hall vendors had already moved out well in advance of the closing. Asian fusion spot Moku Bar relocated in August to a space with a patio at 2914 White Oak, between Tacos-a-Go-Go and Pho Binh. The same owners replaced their Conservatory stand with Nashville hot chicken stand Bird Haus. For that business, managing partner Thy Tran says, “We’re working on a location nearby, but in the meantime will have UberEats as an ordering platform.”

El Burro & The Bull, Conservatory’s only remaining original tenant, moved out at the end of October. The owners, John and Veronica Avila are building a brick-and-mortar for the barbecue business at 5401 Harrisburg, east of downtown. It’s expected to open the first quarter of 2020. Veronica, who is also a professional architect, says it’s progressing quickly. The only other prior Conservatory stand to relocate to a brick-and-mortar is Melange Creperie. (Samurai Noodle, another original Conservatory vendor, already had a storefront location before opening its relatively short-lived food hall stand.)

Closing Conservatory and Prohibition temporarily is the first step of what’s going to be an exceptionally busy 2020 for Mai, Nguyen, and Shepard Ross, their business partner in Bravery Chef Hall and other upcoming food hall projects. The intent is to reopen Prohibition at Chapman & Kirby very quickly — in time for a show scheduled on January 17. Conservatory is going to take some extra time, and the goal for it to debut again sometime in May.

Concurrently, the business partners are working on Railway Heights, an ambitious project located where Katy Road, Hempstead Highway and Washington Avenue convene near the I-10 and 610 interchange. The two-story, 27,000-square-foot facility will house about 20 food stands and a wine bar on the second floor and local grocery vendors, artisans and more downstairs. The video below, as well as the website, has more details about the project and facility. A NextSeed funding campaign for the project that closed on November 27 raised $1,113,900, and the projected opening is sometime around the mid-point of 2020.

The partners are also developing two additional food halls. One is a second Conservatory in the former Club Roxy space at 5351 West Alabama in the Galleria area. According to the Houston Chronicle, it will host 11 food vendors and three bars. It’s slated to open in September. The other project is called Hawker Asian Night Market. Located on the first floor of the Greensheet building at 2601 Main in midtown, the food hall is intended as an homage to the original Little Saigon neighborhood that once thrived east of downtown. A few remnants live on, including the palatial Kim Son downtown location and Huynh.

Opening so many food halls in the same year wasn’t originally Mai’s plan. “It’s been in the works for years. It just happens that some halls opened late, so now it’s all bunched together,” he said.

Conservatory’s last hurrah, for now, is a nod to the aforementioned Asian food hall. The Hawker Night Market is on New Year’s Eve from 6 p.m. to 2 a.m. and features food, drink and dessert specials from the remaining vendors. These include tres leches shooters from Treacherous Leches, dumplings from The Pho Spot and the New Year, New Me punch at the beer garden. For the full menu and additional details, visit the event page on Facebook.