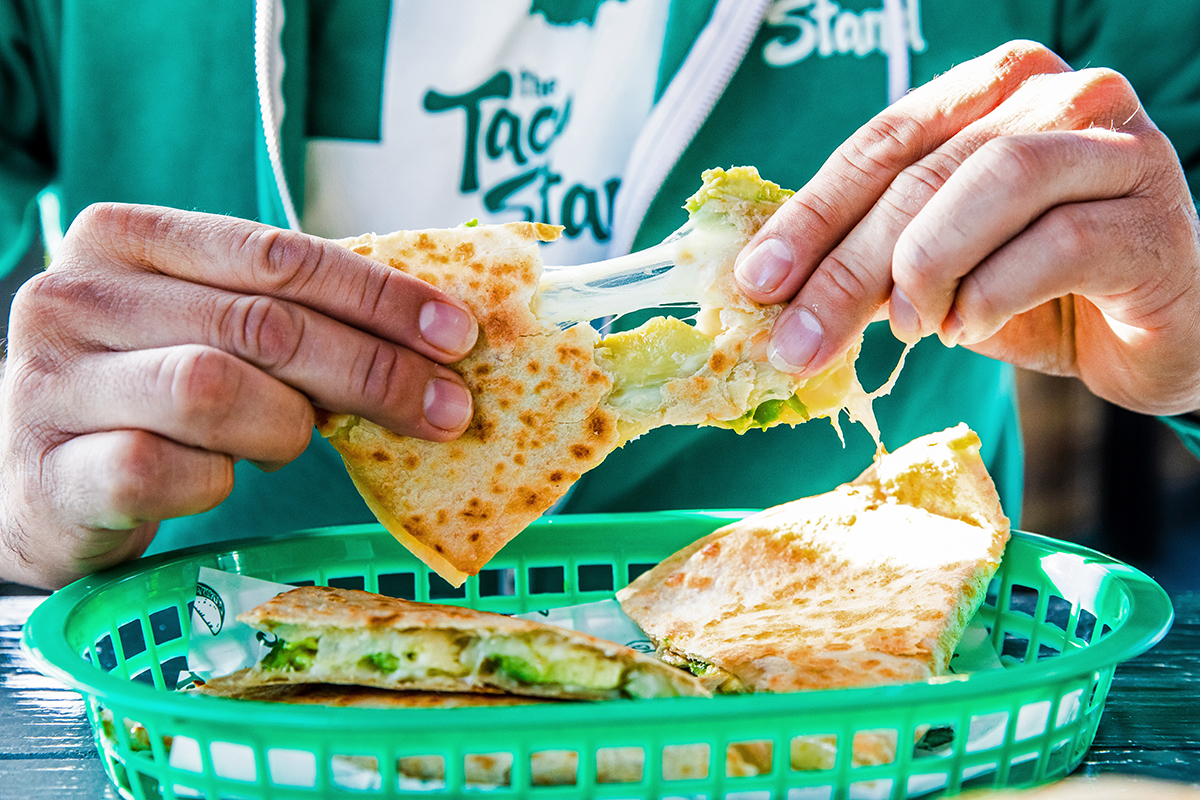 Stretchy cheese in a quesadilla at The Taco Stand. Photo by Becca Wright.

The Heights has a new spot for street tacos, as The Burger Joint partners, chef Matthew Pak and Shawn Bermudez, opened The Taco Stand at 2018 North Shepherd on Wednesday, January 27. It’s just down the street from the second location of The Burger Joint, the first of which is in Montrose. In addition to an extensive selection of taco fillings, one of the biggest benefits of the new restaurant is its long hours. It not only serves breakfast starting at 6 a.m., but stays open until 10 p.m. on weeknights and midnight on Fridays and Saturdays.

The traditional street taco-style options include pastor (marinated and seasoned pork grilled on a spit), barbacoa (beef cheek), lengua (beef tongue), suadero (brisket), chicharrón (fried pork skin) and carnitas (braised pork). Non-meat eaters might instead go for the fish, shrimp, mushroom or poblano with cheese. There’s even a vegan “chicken” option. Guests can also get similar options as burritos or quesadilla, or ditch tortillas altogether and instead order a bowl.

Of course, little pairs with tacos as nicely as agua frescas (current offerings are horchata, limonada and jamaica, which is flavored with tart and vibrantly red hibiscus flowers), sodas or Mexican lager, so all of those are on hand. In addition, there are traditional frozen Margaritas as well as spicy and watermelon riffs on the same, along with housemade canned Margaritas and Palomas developed by Rex Nielsen, beverage director at Present Company, Pak and Bermudez’ Montrose bar. Parents will likely be pleased to see there’s kid-appropriate milk, chocolate milk and orange juice, too.

There’s an equally wide range of options at breakfast time, which runs until 11 a.m., including those good ol’ standbys of egg tacos with either bacon, sausage or potatoes. From there, the breakfast taco choices get a little more adventurous, with eggs paired with chorizo, brisket, barbacoa, veggies or vegan “chorizo”.

The Taco Stand sports nearly as much patio square footage as interior space — 1,700 square feet of outdoor dining area next to the 2,000 square foot building. That, as well as the drive-through, should prove attractive to cautious diners as the COVID-19 pandemic persists.