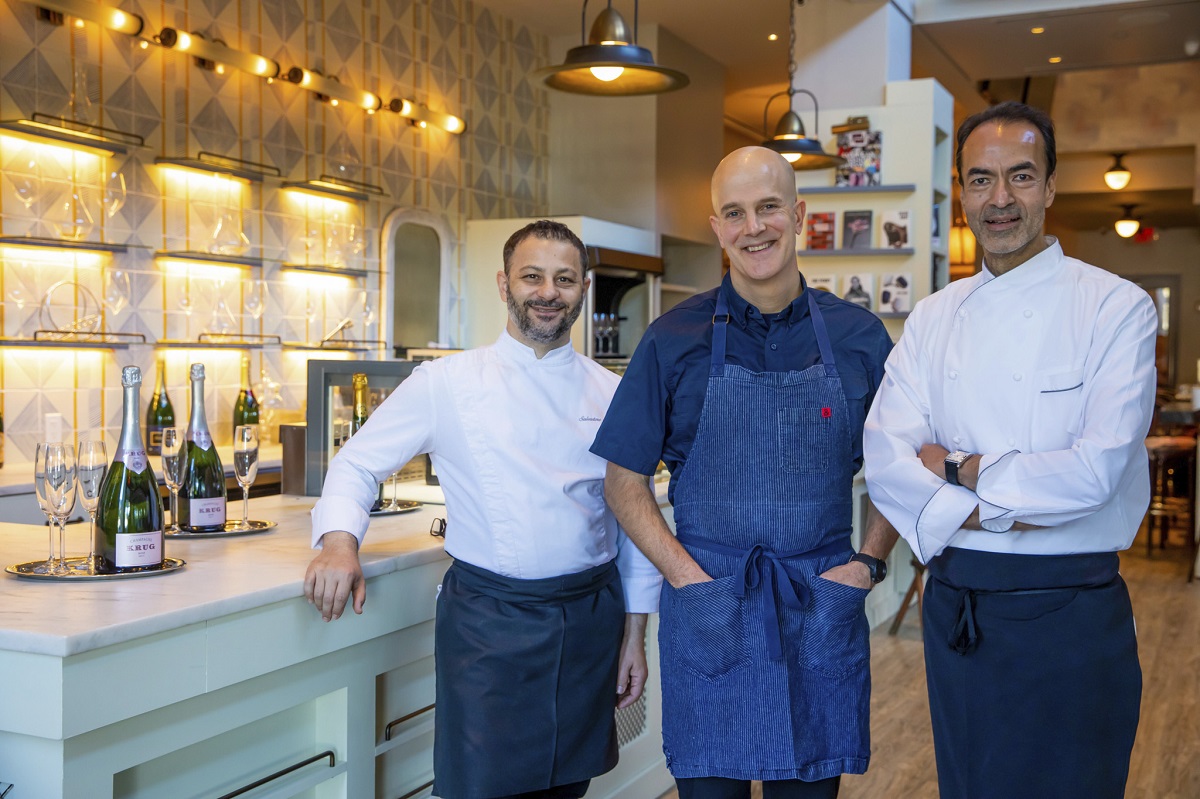 He added that the menu will change with the time of day, “From 8 to 11 a.m., we will offer coffee, breakfast pastries and some savory items, and then from 11 a.m. until close, we will offer salads, soups, focaccias and sandwiches.” Some examples of those afternoon dishes include eggplant Parmesan, lasagna and focaccia. Of the three, Benno thinks the focaccia may be the star of the menu. “I’m really proud of it and eat it too often,” he said. Café Leonelli will serve four to five versions with various toppings. There will also be a gluten-free option baked in a separate oven.

Compared to Le Jardinier, Café Leonelli will be the more relaxed of the two. The eatery will feature a cafeteria-style set up, similar to Luby’s or Cleburne’s. The setting, however, will not simply be a stripped-down eatery. Adorning the ceiling is Spencer Finch’s installation Moon Dust (Apollo 17), which is comprised of 150 suspended light fixtures representing the chemical composition of moon dust gathered by the Apollo 17 astronauts.

To satisfy people with a sweet tooth, Café Leonelli will also serve a wide array of desserts. Benno says there will be “Italian cookies and pastries, and our pastry chef, Salvatore Martone, has a concept in Miami called Frohzen, which has ice cream and ice cream desserts. We are going to have the same thing here. One example is a macaron ice cream sandwich he does, which is really sensational.”

The café will have plenty of standard beverage options and the Benno is also looking into serving local coffee from a Houston roaster alongside a custom blend from Philadelphia’s La Colombe roastery. There will also be alcoholic beverages. “We’ll have canned and bottled beers, half-bottles of wine and we will also offer bottled cocktails that we make in-house,” Benno said.

Depending on the COVID-19 situation, Café Leonelli have up to 100 indoor seats, along with extra seating in the Sculpture Garden. And in the future, Benno says, “We hope to grow into some take-out and delivery from the café as well, which will be our ‘2.0’, after getting through the opening and establishing the brand.”

With a seasonally driven menu and focus on fresh produce and herbs, Le Jardinier, under Michelin-starred chef Alain Verzeroli, will be the more upscale of the two restaurants. It’s not, however, strictly for vegans or vegetarians. Various protein options are also on the menu, including “sustainable seafood, poultry and meat sourced from local partners.” Pastry chef Martone developed gluten-free bakery and pastry items for Le Jardinier as well.

Diners will be able to enjoy their meals al fresco, thanks to Le Jardinier sharing access to the Sculpture Garden with Café Leonelli, or in the dining room. Inside, the centerpiece is a huge tapestry of an abstract forest by artist Trenton Doyle-Hancock, who was born in Oklahoma but raised in Paris, Texas. The artwork references his hometown, as the title is “Color Flash for Chat and Chew, Paris Texas in Seventy-Two”. Other design features include Akari lanterns following the designs of Isamu Noguchi, who died in 1988 and also created the adjacent Sculpture Garden.

A Q&A With Chef Jonathan Benno

Benno has worked in restaurant kitchens for more than three decades alongside the likes of Michael Mina at Aqua, Daniel Boulud at Daniel, Tom Colicchio at Gramercy Tavern and Thomas Keller at the The French Laundry. Eventually, he spent six years in charge of the kitchen at Keller’s Per Se, which earned three Michelin Stars under his leadership. He would go on to open Lincoln Ristorante in New York’s Lincoln Center, where he received another Michelin Star.

With these new restaurants in development, Benno and his fellow chefs have been spending a lot of time in Houston. Recently, Houston Food Finder had the opportunity to sit down with Benno to learn more about the projects and find out what he thinks about Houston, especially after his career working in notable eateries on both the East Coast and West Coast.

Houston Food Finder (HFF): How has the experience been setting up shop in Houston?

HFF: Do you foresee any difficulties adjusting to service in Houston?

Benno: The quality of restaurants here and the quality of ingredients — I don’t see a difference. Polenta is grits, and everyone loves a good meatball, braised short rib or chicken cacciatore.

HFF: Is setting up Café Leonelli in Houston part of a long-term plan or a unique opportunity?

Benno: It was a little bit of both. Our financial partners, Crest Investments, are based here in Houston and are very active with the museum. We have been working on this for six or nine months. The opportunity part of this comes sadly from the fact that, right now, restaurants are not open in New York and it will take a long time for them to come back. I am really grateful to be able to come down here and work with Steven and at La Table, and to be able to create a variation on a concept we are doing in New York. Café Leonelli will be unique to the museum. There is not another one like it.

HFF: Looking at your Instagram. It looks as though your food is very accessible.

Benno: That is certainly our goal. In New York, our location is in a 155-room hotel. We see guests from all over the world, so quality, accessibility and quick service are our priorities

HFF: Houston has many Italian and pizza restaurants, but none that really specialize in focaccia.

Benno: This coming from a New Yorker: there is a lot of great pizza down here [in Houston]. I have been to a lot of places. We are going to Coltivare tonight. They all do a tremendous job for pizza, but I think you’re right. Even in New York, I don’t see a lot of places that do the large format, crusty focaccia with premium toppings.

HFF: With a background in French cooking, what led to the transition to Italian cuisine?

Benno: My grandmother was Italian. While my career path was more fine dining and French, my wife worked with Joe Bastianich and Mario Batali for many years at their restaurants in New York, so I really caught the bug from her. I have been lucky enough to really travel around Italy, and ten years ago I opened a restaurant in the Lincoln Center, called Lincoln. So, I’ve been doing Italian food for quite a while now.

HFF: How do you feel about the potential for business inside of the museum?

Benno: We’re the only food service on the campus, and being on the casual side, Café Leonelli and Frohzen will be very busy.

HFF: So you are saying is Leonelli is creating a new convenience for museum guests?

Benno: There is a captive audience and, sadly, I’ll speak for New York. In terms of food service for museums, it tends to be more utilitarian, and there is some work to be done. The fine-dining restaurant [La Jardinier] will be open to museum guests, but will be perceived as a destination. It will see some lunch business from the museum, but with its price point and personality, the goal is to make it a destination

HFF: In regards to the location, will the restaurant be set apart or part of a gallery?

Benno: It’s a gallery. It looks like the Guggenheim in New York. It is absolutely beautiful. What they’ve done, as part of this next phase of the development, is connect each of the buildings with these beautiful tunnels and lighting installations. So, you can move from gallery to gallery without having to go outside. The gallery that our two restaurants are in is absolutely stunning. They are in the process of populating it with art. There is even a lighting installation — a piece of artwork on our café’s ceiling. You can kind of peek in now and see it. And then, the Le Jardinier space is beautiful, with two to three large installations in that space as well. It is breathtaking — just a special location!