New Houston Restaurant Nobu Has Finally Arrived At The Galleria 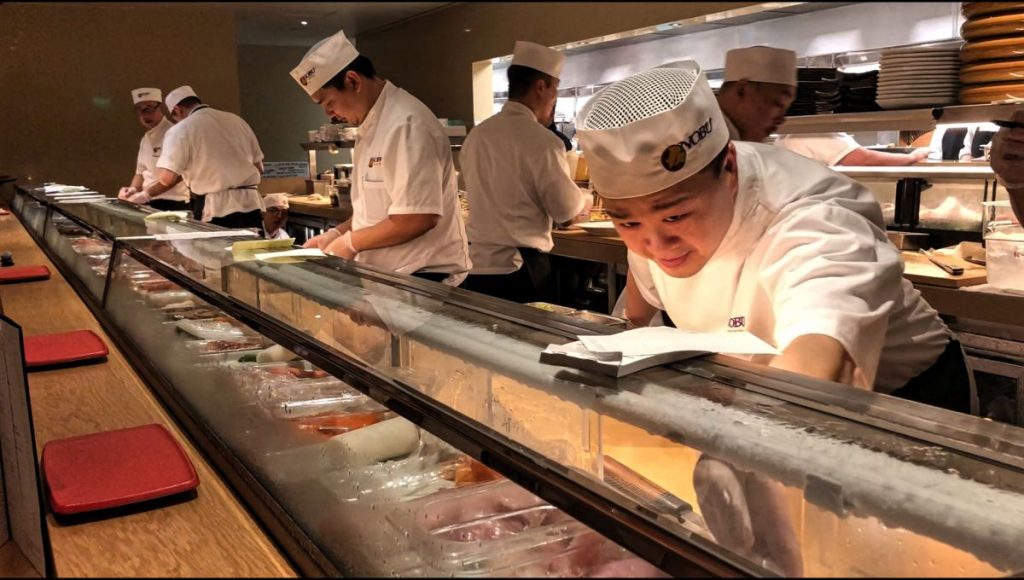 This past weekend, one of the world’s most recognized and luxurious sushi restaurants, Nobu (founded by renowned chef Nobu Matsuhisa and celebrity Robert De Niro) finally opened the doors of its first — and, for now, only — Houston location. (In fact, it’s only the second Nobu in all of Texas; the other is in Dallas.) Nobu is at 5115 Westheimer in the former Saks Fifth Avenue in The Galleria. It joins the hot group of recent and forthcoming restaurants that includes Fig & Olive and soon-to-be open Musaafer by The Spice Route Company and Blanco Tacos + Tequila.

Nobu has over 40 locations across the world and it’s been a little over a year since the Galleria one was announced. To say that the opening was “eagerly anticipated” would be a gross understatement. On Saturday, it was a packed house. As of press time, reservations website Open Table has nothing available for parties of two or four before 9:15 pm until Monday, June 25.

(Calling might unearth some actual open tables — but definitely not for next Saturday. A staffer told us by phone that it’s totally booked.)

It can be as long as a three-hour wait for a table without a reservation. Service is also available in the bar and lounge areas on a first-come-first-serve basis. There is an ample patio but they’re not serving diners there just yet.

So, let’s cut to the chase: without an “in” or a preexisting reservation, diners who don’t like to wait on a table should let the buzz on Nobu die down to a dull roar. Opening service was also a little rocky due to the overload of enthusiastic diners. (It took 30 minutes just to get a check.) That’s despite a Nobu server saying the company brought in team members from all over the world to train local employees. The team includes chef Carl Murray, also of Dallas Nobu, chef Eiji Saito from the Caesar’s Palace location and general manager Gordon Gilbert, formerly of Nobu locations in the Caribbean and Vegas, and additional managers from other areas of the country.

Although we had ordered the Tuna Tataki, instead we received the New Style Sashimi Salmon for $24 along with some of their signature cocktails like the Nobu Sidecar with Iwai Japanese whiskey, Gran Torres Orange and yuzu juice for $14 (cocktail prices vary depending on the location and are currently not online for Nobu Houston). One cocktail each and the single salmon dish for a party of four at the bar was over $100.

That’s the second point: Nobu is not cheap. It never has been — so don’t ramble in expecting fast-casual sushi. That is not what this restaurant chain is all about.  (To really experience Nobu’s finer touches — again — maybe hold off a month or so before going in.)

In addition to hot and cold dishes like the signature black cod with miso for $38 and the yellowtail sashimi with jalapeño for $27, Nobu has added some Houston-inspired elements to the menu. There’s an emphasis on locally sourced meat, fish and produce. Most notably, the whole grilled or tempura fish special was Gulf Coast wild red snapper and the grilled Wagyu served in a pot with truffle cabbage and cherry blossom smoke.

For those wanting to experience Nobu without completely breaking the bank, there is a daily happy hour from 5 to 6 p.m. in the bar lounge area only with a selection of cold, hot and sushi maki dishes all under $16 each (which still isn’t exactly cheap).

While Nobu is certainly in a class of its own, there’s more luxury Japanese fare in Houston than ever before. This weekend’s opening follows somewhat on the heels of award-winning Japanese sushi and steakhouse chain Roka Akor. Other notable competition includes famed Austin transplant Uchi Houston, James Beard-nominated chef Manabu “Hori” Horiuchi’s Kata Robata, a local favorite since 2009, MF Sushi in the Museum District and KUU on Houston’s West side ran by former Matsuhisa protégé Adison Lee.

Only time will tell if well-heeled Houstonians will continue to flock to Nobu once the buzz subsides.

Nobu Houston is located at 5115 Westheimer with dinner service Sundays through Thursdays from 6 to 10 p.m. and on Fridays and Saturdays from 6 to 11 p.m. with the bar and lounge opening one hour prior each day at 5 p.m.

Houston Food Finder5 hours ago
CONGRATULATIONS to Mish Bryant who is our randomly drawn winner of a FREE Autumn Goodie Box! She won thanks to 1) purchasing the prior box and 2) posting an unboxing video with the hashtag #hffgoodiebox. We're sharing her video for your watching enjoyment below. The Autumn Goodie Boxes are being finalized now, and will be on sale very soon. You don't want to miss these, which are chock-full of gift cards, snacks, swag and more from independent Houston restaurants, bars and other food and drink businesses. Only 50 will ever be created of this edition. We are in need of a few more gift cards to round out the Autumn box, so if you'd like your business represented, email phaedra@houstonfoodfinder.com. Thanks to all of our supporting reader and sponsors!

Houston Food Finder9 hours ago
This year, the Speed Rack competition events were scaled back due to the pandemic, but there was still an exciting end result for a Houstonian. Local bartender Sarah Troxell of The Toasted Coconut and Nobie's was this year's national winner. It's a goal she's worked toward for years. In a new podcast episode, our editor and publisher Phaedra Cook speaks with Sarah on her win and what her plans are for the future.

After years of practice and competition, Sarah Troxell of The Toasted Coconut is the 2021 national Speed Rack winner. Houston Food Finder editor and publisher Phaedra Cook talks with Sarah about the b
5    View on Facebook

After years of practice and competition, Sarah Troxell of The Toasted Coconut is the 2021 national Speed Rack winner. Houston Food Finder editor and publisher Phaedra Cook talks with Sarah about the b
3    View on Facebook

Houston Food Finder with Rainbow Lodge.1 day ago
It’s not too early to order your favorite Rainbow Lodge dishes to enjoy at home on Thanksgiving. Pre-order a la carte meats and side dishes for pickup November 23 through 25. Choose from entrées of Beef Tenderloin, Bison Tenderloin, Whole Roasted Turkey, Quail and Duck to pair with sides such as Wild Mushroom Risotto and Potato, Brussels Leaves and Onion Hash. There is Smoked Duck and Andouille Gumbo, bread and dessert too! View the Thanksgiving To-Go menu on the website and call (713) 861-8666 for pickup. Note that 48 hours’ notice is required for Thanksgiving to-go orders. View the full menu online at https://www.rainbow-lodge.com/thanksgiving-to-go

Houston Food Finder1 day ago
Event Alert: Join Impero Wine and the Italy-America Chamber of Commerce of Texas at Epicure-Cafe Houston on Thursday, October 28 for a night dedicated to live music, delicious food and wines.