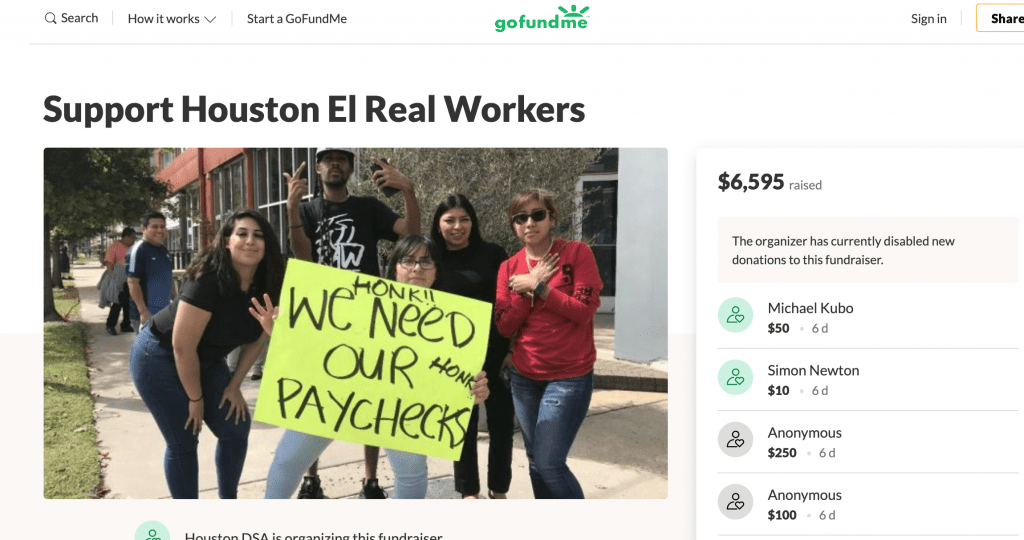 by Phaedra Cook and Carlos Brandon

Crowdfunding platforms such as GoFundMe can be used for humanitarian efforts that demonstrate the combined power of good-hearted people. However, there is a potential flaw: anyone can start a crowdfunding campaign without much thought to how to actually distribute the funds . It’s one thing when a campaign is established to benefit only one person or family, but when there are multiple intended beneficiaries, it’s a much more complicated endeavor.

A fund established by the Houston chapter of the Democratic Socialists of America (DSA) to help former El Real Tex-Mex employees may have encountered these difficulties. The DSA campaign, which raised $6,595 in only two days, only helped 14 out of approximately 50 employees.

As previously reported, El Real Tex-Mex owner Bryan Caswell decided to close the restaurant before lunchtime on Monday, October 28. As that news started reaching the public, ABC13 reporter Miya Shay, who was on the way to another story, saw employees protesting outside of the restaurant. She stopped and discovered that they had not received their pay checks, which were due the previous Friday. Later in the day, the employees moved the protest to Caswell’s other restaurant, Reef. By that point, members of the DSA had seen the news on social media and joined the protest. The next day, the organization started the GoFundMe to help the employees. The fundraiser page indicated that all employees would receive a portion of the fund, reading, “All donations will be going to the ~40 El Real workers in a way that they determine.

By last Friday afternoon, Caswell made good on his promise the day the restaurant closed to pay the former El Real employees, at least those who could pick up a check between 3 and 5 p.m. Updated, 11/11/19, 8:56 a.m.: According to Eater Houston, checks are also being mailed to employees who couldn’t make the pickup window.

As for the GoFundMe campaign, checks were only distributed to 14 employees. The fund is now empty and closed. Bryan LaVergne, co-chair of the Houston DSA, said the following:

“Not all of the employees received money. The process was that DSA was not going to determine who received funds, but instead the workers we were coordinating with would reach out to their co-workers and produce a list of folks based on professed need. Many workers were unable to be contacted by the worker-organizers we coordinated with.

Once we in DSA felt that the organizers demonstrated an effort to contact as many of their co-workers as possible, we agreed to their list and wrote checks for the amounts as determined by them. DSA made no determination in the amounts nor who received the money, we only tried to ensure that a demonstrated effort was made to find who needed money the most so as to distribute the limited funds raised with maximum effect.”

Rather than taking responsibility for distributing the funds that it collected, the DSA placed a few former El Real employees in charge of that process. Screenshots provided to Houston Food Finder did show that that this group of former employees were trying to contact others via text messages — but that effort would have been limited to the phone numbers that they already had or were able to acquire from co-workers. No one involved in the process had a complete list of employees and contact information, nor did anyone attempt to obtain one from Caswell, according to both LaVergne and Caswell’s public relations representative.

The process was also extremely rushed. According to LaVergne, the GoFundMe was started on Tuesday, October 29, the day after El Real Tex-Mex closed, and the fund was closed and checks distributed only two days later, on Thursday, October 31.

We spoke with the server who was primarily in charge of distributing checks, who incidentally says that they declined to receive a portion of the funds. (To avoid the person being subjected to online harassment, and because this person was far from the only one involved, we are not disclosing this source.)

Why was the money distributed so quickly?  According to the employee, “Rent was due on the 1st, so that’s why the DSA closed the GoFundMe very quickly, to distribute checks.”

Amounts distributed to the 14 employees who received checks varied. Outlays were based on presenting proof of need, such as an electric bill or eviction notice, so some received more than others. The $6,595 raised reportedly ran out very quickly.

According to the server who helped distribute the funds, checks went to two hostesses, two bartenders, one general manager, “two ladies from the kitchen” and seven servers. With the exception of the two mentioned kitchen employees, cooks, dishwashers and busboys apparently were left out. The server claims four former employees declined the money for various reasons — but that leaves 32 unaccounted for, and some say they were never contacted at all.

“We never saw any of the money. The only ones who got paid were the waiters,” said Macario Alvarez, who was a busser and barback at El Real. (Based on the statements made by other employees, Alvarez’s perception of the situation was not totally accurate, but “front of house” workers did receive the majority of the checks.) He also says that no one spoke with him about receiving a portion of the fundraiser. He did hear from a former El Real Tex-Mex manager, Marcelo Reyna — who says he was also left out of the distribution — but it was after the funds were distributed.

Concerned about the how the money was distributed, Reyna started checking on who else didn’t receive a share. Reyna also claims that one of the recipients offered to split his check with him, provided he kept quiet about the employees who were left out.

Another person who didn’t receive a distribution was Cristina Rivas, who did kitchen prep in the mornings. “Many of us didn’t get anything,” she said. “There are about fifteen of us, from the kitchen [who didn’t get paid].” Rivas said she believes the kitchen workers were left out primarily because most don’t speak English.

With the money gone and the fund closed, there’s not a good fix for the situation. Based on an update to the GoFundMe page, the DSA is putting the responsibility back on the workers who received a distribution, should anyone who didn’t get one ask for financial assistance. The online post reads, “If there happens to be any worker who did not respond in time, several of the people who received checks are more than willing to pool together and distribute some of that relief.” Considering that the employees who did receive financial assistance demonstrated proof of need, chances are that the money is already spent.

Helping a multitude of people in the most fair way possible is not actually easy — or fast. Organizations that specialize in providing assistance put a great deal of effort into creating processes and procedures to ensure fairness. Even when the needs are dire, money isn’t usually distributed for weeks or months, because there are rules to follow.

Sometimes, the best intentions don’t lead to ideal results. Anyone wanting to start a crowdfunding campaign that is supposed to help many people needs to think about fair and equitable distribution first, not after the fact. GoFundMe has a policy intended to protect donors and intended beneficiaries from problems such as “misleading statements in the campaign description,” not delivering funds to the stated beneficiary” and “not using funds for their stated purpose.” Both donor refund requests and beneficiary claims can be filed online.

Even though the GoFundMe is now done and over with, hospitality employees in need of assistance can still apply for help from the Southern Smoke Foundation, the program spearheaded by chef Chris Shepherd of One Fifth, UB Preserv, Georgia James and The Hay Merchant and public relations professional Lindsey Brown. Food festivals and dining events in the spring and fall help fund this resource. Executive director Kathryn Lott says the fund has helped some El Real Tex-Mex employees already, and is continuing to assist as applications come in. The application is online and available in both English and Spanish.