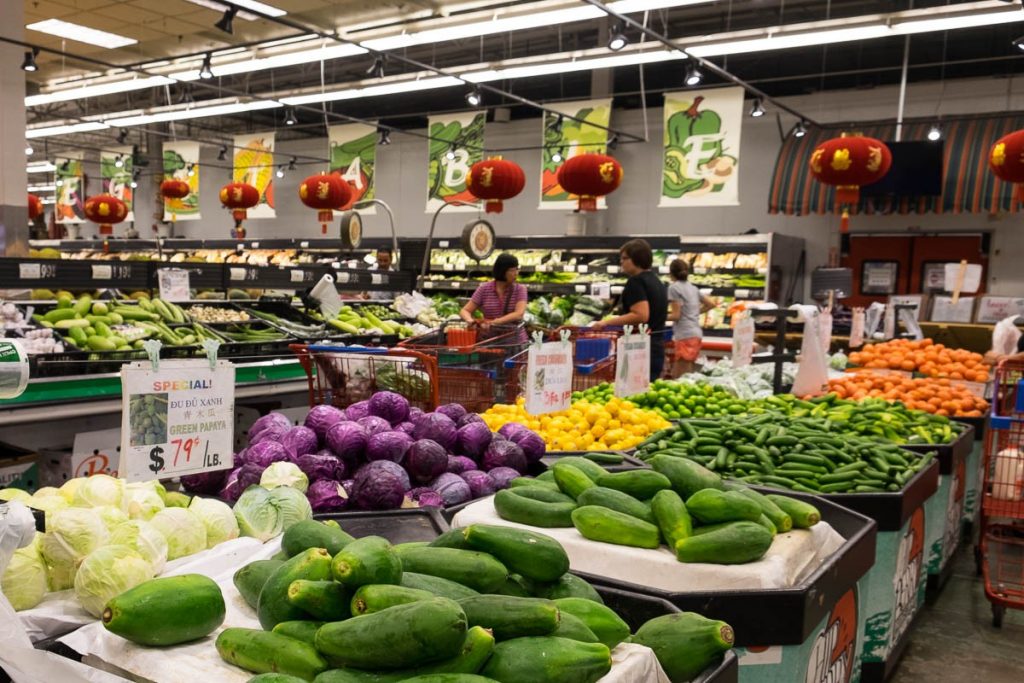 Some Houston-area grocery stores such as Viet Hoa are opening today, but supplies may be limited and some have long lines. Photo by Phaedra Cook

This list is being continually updated. Please also check the comments section, as readers and restaurant owners are also posting helpful information there.

With so many places still flooded in and closed, this is a comprehensive list of everything we are hearing that is open today, Monday, August 28. If you know something not on this list, please e-mail us so we can share it with the rest of our readers.

Bear with us as we continue to expand and add to this. Reports are rolling in by the second. Please do not go out if you do not have to!

We are hearing of grocery stores that are opening today. However, do be aware that some are putting limits on how many people they will allow into the store at one time. For that reason, lines are forming. Please be patient as the employees are doing the best they can under the conditions.

OVERALL UPDATE ON GROCERY STORES: Many, in general, are closing early—between 3 and 6 p.m. in many cases. If you know of one that is open after 6 p.m., please email us.

OVERALL UPDATE SPECIFICALLY ON H-E-B: Houston-area stores closed at or before 3 p.m. today.

Spec’s, 2410 Smith: So much more than a liquor store, Spec’s has a hot and cold deli counter, produce section and groceries. A reader says it’s closing at 5 or 6 p.m.

Kroger, 1035 North Shepherd at 11th Street: Open with a limit of 50 people at one time. Also has a pharmacy.

Valero, 6450 West 43rd: Not a grocery store, but it has a convenience store that is reported as open.

Kroger, 1938 West Gray: UPDATED: Reported as closed by a reader around 2 p.m.

Hotel Restaurants: A reader reported that most hotel restaurants seem to be open and serving, including Main Kitchen at J.W. Marriott, The Lounge at Magnolia Hotel. A representative says that Bayou & Bottle at the Four Seasons Houston is also open, as is Italian restaurant Quattro. Re:fuel By Aloft has grab-and-go food options.

Balls Out Burger, 1603 North Durham: UPDATE: Has ran out of food and closed per their Facebook page.

Liberty Kitchen & Oyster Bar, 1050 Studewood: Open with a limited menu for as long as conditions are safe.

Asian City Restaurant, 20205 Highway 59 North, Humble: A representative for the restaurant reports it is open on Monday.

Grotto, 4715 Westheimer: Open with a limited lunch menu for per their Facebook page. Unfortunately, we don’t know what time lunch ends yet or what the status for dinner will be. Their other location in The Woodlands is closed today.

Latin Bites, 5709 Woodway: Manager Rita Castre emailed to say, “We are not putting any of our employees at risk. That means that all my family is getting together to take care of the back and front of the house. We are going to offer a reduced menu and free coffee.”

Cavo Coffee, 3773 Richmond: Reported as open by a reader at 12:30 p.m. Serves light breakfas reacht, lunch and dinner fare as well as espresso drinks, beer and wine. Normally closes at 8 p.m. on Mondays.

Al’s Quick Stop, 2002 Waugh: The kitchen at this convenience store is open and serves both Mediterranean and Mexican food.

Empire Cafe, 1732 Westheimer: Open and “proud to serve the neighborhood.”

The Hay Merchant, 1100 Westheimer: Opening at 2 p.m. with a limited menu of wings, burgers and goat and dumpling per a representative.

Revelry On Richmond, 1613 Richmond: Open with a limited menu. The person we spoke with by phone said she was not sure what time it would close.

Killen’s Burger, 2804 South Main: A representative reports that it is open with a limited menu.

Romano’s Pizza, 1528 West Gray: The restaurant reports on its Facebook page that it is open. A reader says that tonight only pizza is being served.

Hunan Garden, 4601 Avenue H # 7, Rosenberg: This location is open; the Kingwood one is closed today. Hunan Garden is also accepting donations. We are currently trying to find out what kind and where these are going.

Anthonie’s Deli, 4444 Cypress Creek Parkway: A reader reports the Willowbrook neighborhood deli is “staying open as long as it needs to” to serve the community.