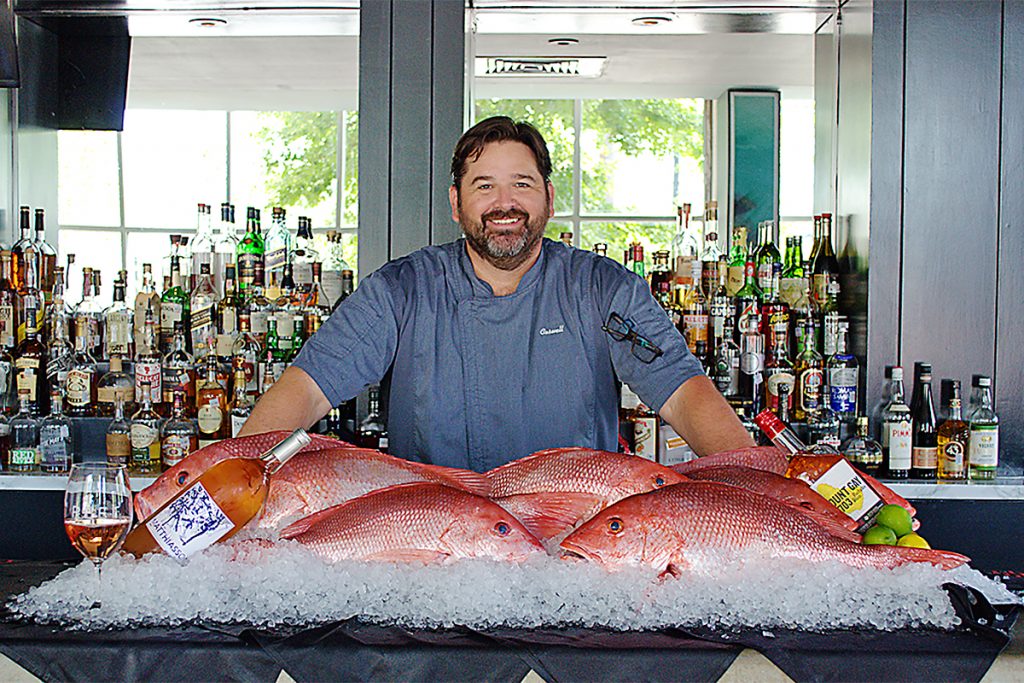 Reef at 2600 Travis is ready for its comeback. After Hurricane Harvey damaged chef-restaurateur Bryan Caswell’s acclaimed restaurant, he was forced to temporarily close. Now, 21 months later, Reef is open for lunch Mondays through Saturdays from 11 a.m. to 3 p.m. Dinner isn’t being served yet, but is coming soon. In the meantime, 3rd Bar next door is open for lunch and dinner Mondays through Saturdays from 11 a.m. to 2 a.m. According to Caswell (via a representative), the long delays in reopening Reef and 3rd Bar were due to “a litany of bad luck dealing with insurance [and] contractor issues.”

Though Reef has a fresh look, menu and a new website, one thing hasn’t changed: Caswell’s intense focus on Gulf seafood. The Crab Fat Dough, a new starter, is receiving early praise, while a soft-opening guest anonymously messaged us to say that Reef’s Snapper in an Envelope (en papillote) with grapefruit, hon shimeji (brown beech mushrooms) and herb salad was the “best snapper I’ve ever had.” Caswell’s seafood gumbo is making a triumphant return, while dishes such as Collard Green Pie hint at the now-closed Oxbow 7. Other draws include Crispy Flounder, clams prepared with andouille sausage, and East Coast oysters — we on the Gulf Coast are big enough to make room for the competition.

Among Houston chefs, Caswell has had one of the most extraordinary and prolific careers to-date. He honed his craft working for world-renowned chef Jean-Georges Vongerichten at Bank (now Line & Lariat) in Hotel Icon, before opening Reef in 2007.  The Gulf-seafood focus earned Caswell and his restaurant national acclaim. In 2008, Reef was a James Beard Award semifinalist for Best New Restaurant. A year later, Caswell was honored with a Best Chef Southwest nomination. While neither resulted in a win, it led to a string of honors from top food magazines and a spot on Food Network’s “Next Iron Chef.” It was there that he met and established a friendship with chef Ming Tsai. “We were on ‘The Next Iron Chef’ together and hung out a lot,” Tsai told Houston Food Finder in December 2016. He added, “Reef is fantastic […].”

Caswell’s success gave him a platform to build a Houston restaurant empire with a diverse group of collaborators, most often businessman and restaurateur Bill Floyd. Caswell and Floyd followed up Reef with Little Bigs, a casual slider joint that was on Montrose near Westheimer and the acclaimed-but-short-lived Stella Sola in 2010, which shuttered a little over two years later. In 2011, he co-founded El Real Tex-Mex with Floyd and James Beard Award-winning food writer Robb Walsh. Jackson Street BBQ followed, this time with Floyd as well as pitmaster and restaurant owner Greg Gatlin of Gatlin’s BBQ. In 2013, both Reef and El Real got spinoffs, 3rd Bar Eating House and a Tex-Mex counter space in Terminal B.

Things got bumpy in 2016 when Caswell exited a high-profile downtown Italian restaurant project, planned with Floyd and Astros owner Jim Crane. That project evolved into the dual restaurants, Osso & Kristalla and Potente, which are now helmed by former Brennan’s of Houston chef Danny Trace.

In the meantime, Caswell formed Bryan Caswell Concepts with wife Jennifer — and then Hurricane Harvey hit.

Though Reef sustained too much damage to reopen, the couple immediately turned it into a relief kitchen. They recruited dozens of volunteers and made tens of thousands of meals for first responders and flood victims staying in shelters. After that, the Caswells still had enough energy to head to hard-hit Rockport to help feed people there.

In September 2017 — less than a month after Hurricane Harvey hit — the Caswells decided to shut down Little Bigs, which was then in Chelsea Market. (In January 2019, the complex itself closed to make way for a high-rise apartment building.) Caswell says he’d “love to reopen [Little Bigs] at some point, but right now the focus is on Reef and 3rd Bar.”

In a shocking turn, only four months later, the hotel “released” the Caswells from their contract, claiming the couple were focusing on reopening Reef. While the Caswells said that had nothing to do with the issue and they were receiving advice from their lawyer, it doesn’t appear that a lawsuit was ever filed.

Updated, 6/1/19, 10:42 pm.: Bryan Caswell communicated via a media relations representative that Jennifer Caswell is no longer involved with Reef.

Within seven months, the Caswells lost three restaurants — at least temporarily. Then, in July 2018, the Caswells’ home caught fire.

According to an April 2019 Facebook post by Jennifer Caswell, the fire was caused by lightning and their family had lost their “home and everything in it.” Fortunately — and most importantly — there was no loss of life.

Will reopening Reef mark Caswell’s return to the spotlight? Navigating the constantly evolving Houston restaurant-scape, with its sizable slate of James Beard Award-winners and nominees and many high-profile openings and closings, is never easy. So, only time will tell if Reef’s return and focus on Gulf seafood will bring a new wave of success to one of Houston’s original celebrity chefs.

Houston Food Finder11 hours ago
Summer temperatures have arrived in Houston, and what sounds really, really good right now is a chilled seafood dish with an icy cocktail alongside. You can find that and so much more with Beth Levine's brand-new Hit List of #Houston restaurants to visit for June 2021.

Houston Food Finder1 day ago
ICYMI: Did you know Farmhouse Delivery has been delivering carefully selected Texas-made goods to doorsteps for over a decade? They go deep to connect small businesses with consumers and offer a unique middle-ground between farmers markets and conventional grocery stores. Ryan Kasey Baker sampled a delivery box and offers a taste of what's inside. Click below for the full details and a special discount code!