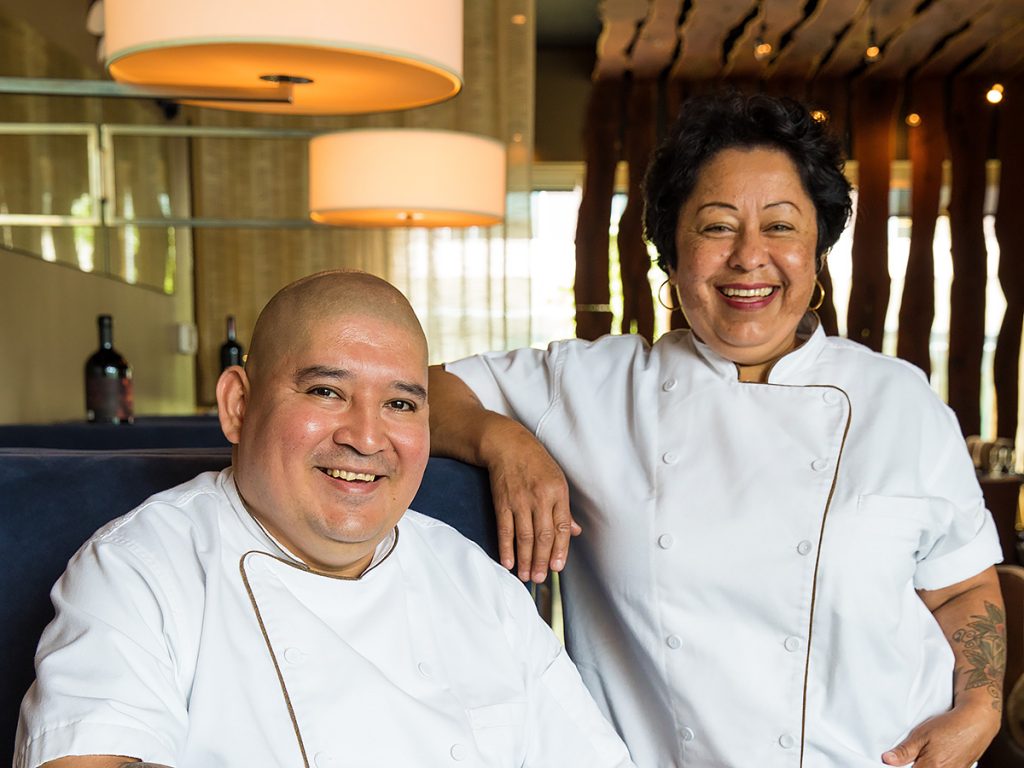 Several years before executive chef Ana Amaya and executive sous chef Adrian Del Angel — who are also married — were installed as the culinary team at Radio Milano earlier this summer, they worked at the now closed Bistro Moderne. She was a line cook and he was a dishwasher. Their shared journey from those beginnings to senior positions at CityCentre’s Hotel Sorella travels through some important moments in Houston’s recent culinary history.

Neither Amaya or Del Angel are new to the upscale restaurant at CityCentre. They’ve worked there for four years, mostly under former executive chef Jose Hernandez, who now oversees Lucienne and Bar Bardot at the Hotel Alessandra in downtown Houston.

Hernandez, the couple’s now-former boss, moved from New York to Houston in the mid 2000s to work for executive chef Philippe Schmit and chef Manuel Pucha at Bistro Moderne. That’s were he first encountered Amaya and Del Angel. This group, along with chef Ryan Hildebrand, another Bistro Moderne alum, would all go on to make their marks on Houston’s restaurant scene. Schmit opened the eponymous, also-closed Philippe, while Pucha along with his brothers, Cristian and Victor, now operate Maison Pucha. Hildebrand later opened Triniti — where Hernandez garnered attention for his desserts — and now runs FM Kitchen & Bar.

When Bistro Moderne shuttered in 2007, the couple worked in different restaurants for a couple of years: Amaya under chef-owner Kiran Verma of Kiran’s and Del Angel for Geneviève Guy at Memorial-area French mainstay Bistro Provence.

Then, the couple reunited in the professional sense at Lasco Enterprises, which operates both Max’s Wine Dive and The Tasting Room. They said they stayed with the company for eight or nine years — a remarkably long time by restaurant industry standards. “Some people work for a year here and a year there, but we’re the kind of people that stay,” said Amaya. She was at the original Max’s Wine Dive on Washington during the term of notable chefs such as Jonathan Jones and Michael Pellegrino. Del Angel’s home base was at the Montrose location on Fairview.

Eventually, they did leave for new territory. “I decided I wanted a different experience, this time with an Italian restaurant,” said Amaya. “So, I came to Radio Milano with chef Jose.”

Now officially installed as the executive chef and executive sous chef at Radio Milano, respectively, Amaya and Del Angel are putting their own stamp on the menu. The menu initially was traditional Italian, but the couple is now also looking to French and Latin cuisine for inspiration. At the same time, their cooking methodology is still very much in line with what they learned from their mentors. Unlike other hotel restaurants, Radio Milano’s dishes are made from scratch. “For me, it’s been important to take care of my customers with good food and ingredients,” said Amaya. “Everything is fresh and homemade. Nothing is frozen.” The portions are larger than before as well.

Amaya says she’s more hands-on than most executive chefs. “I don’t like to just call tickets,” she explained. “I like to be in the kitchen — cooking, cooking, cooking — all the time for my customers. I cook every day.”

In addition to Radio Milano, the chef couple is also responsible for the culinary program for the two hotel bars, downstairs Bar Milano and upstairs bar Monnalisa, as well as room service orders. Between the regular menu, bar bites — which includes traditional pub-like fare such as a lamb burger, pizza and beef taquitos — and Hotel Sorella’s complimentary continental breakfast, the kitchen staff has to execute around 35 different dishes everyday.

The couple says that, currently, Radio Milano’s most popular dishes include the big, 18-ounce portion of lasagna and the beef filet. Surprisingly, pork dishes have been a tough sell, including a delectable-sounding fusilli with pork confit, mushroom sauce and Parmesan.

It’s not unique for couples to work together in restaurants, but it’s usually a less formal arrangement. So, how does Del Angel feel about his wife being his boss? The duo laughed at the question and then Del Angel replied, “A job is a job, so we just stay focused when we’re at work. Once we’re off work, it’s a whole different story. On the job, though, she’s my boss and we do whatever she wants. When we do menu changes, I’ll give her ideas, she’ll give me ideas and we’ll put it all together.”

As far as their shared goal for Radio Milano, they say what they want to hear most of all is that their guests are happy. “I love when people come in and say, ‘You know why I come here? Because I love this food,’” said Amaya. “Good feedback makes our day,” said Del Angel.

Radio Milano is located on the second floor of Hotel Sorella at 800 Sorella in CityCentre. Lunch is Monday through Saturday from 11 a.m. to 4 p.m. Dinner runs from 5 to 9 p.m. Mondays through Wednesdays and 5 p.m. to 10 p.m. Thursdays through Saturdays. (The restaurant is closed for one hour after lunch to reset for dinner.) Brunch is offered on Sundays from 10 a.m. to 3 p.m. Valet is complimentary or self-park in the main CityCentre garage. More information is available at the Radio Milano website.