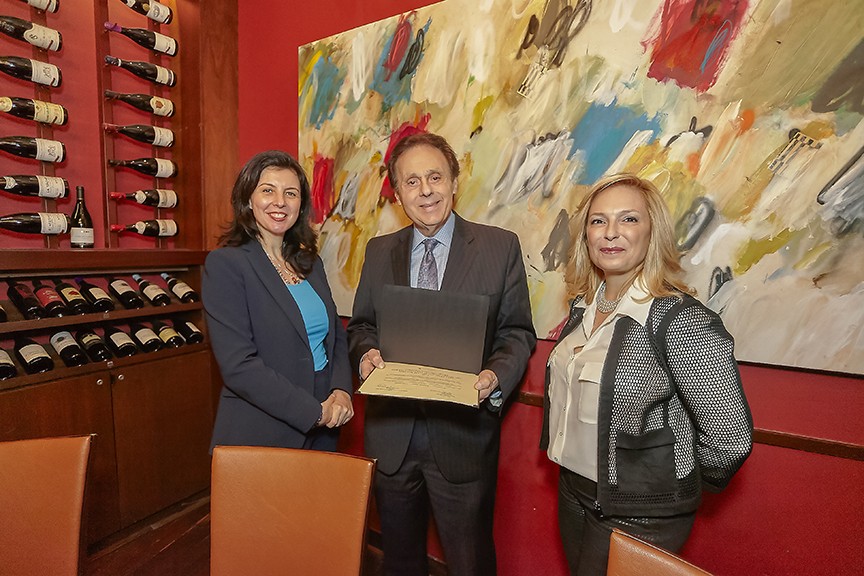 After years of struggling with undisclosed health issues, legendary Houston restaurateur Tony Vallone of the iconic Tony’s died on Wednesday, September 9, at the age of 75. Founded by Vallone in 1965, this year was the 55th anniversary of his acclaimed original restaurant, a spot that defined fine dining, elegant Italian fare and outstanding service in Houston. Tony’s started on Sage Road before Vallone moved to its current location at 3755 Richmond near Greenway Plaza.

Vallone used to say, “I’m going out with pasta in one hand and fish in the other,” and indeed, pasta and seafood was something for which he was known. He not only maintained rigorous standards of excellence in dining, but introduced Houston to fresh, authentic takes on Italian cuisine. As noted in a Houston Press interview from 2015: “Tony’s served pasta with seafood, and at the time that was a new thing for Houstonians. ‘People were just raving about it and it was something I grew up on. They were used to the American-Italian restaurants we had in those days.’”

“Mr. Vallone is a true pioneer of Italian cuisine in Texas and the United States. His celebrated career as an Italian gourmet, chef, and restaurateur has helped to elevate Italian cookery, both innovative and traditional, to a fine art and science in North America,” declared a statement by the Italy-America Chamber of Commerce of Texas, upon presenting Vallone with an award in 2018.

“I’ve lost the love of my life and my best friend, but I will continue Tony’s legacy,” his wife Donna Vallone said in a statement. In addition, Austin Waiter is reportedly continuing in his current role as head chef. Tony’s staff members, some who have worked there for over 40 years, will also help in maintaining the restaurant’s high standards and commitments to its customers.

While Tony’s is the original and most iconic of all of the Vallones’ restaurants, during some periods they owned multiple throughout Houston, including steakhouse Vallone’s in Memorial City, which shuttered in 2018. Ciao Bello also abruptly closed in 2018 after nine years of business.

Tony’s is closed at this time, but is slated to reopen on September 15. According to a press release, a memorial service is being held at a later date and information will soon be available for those who want to make donations in Vallone’s honor.

Houston Food Finder29 minutes ago
There's a new technology hub coming to Midtown (remember the old Sears building? It's getting a serious upgrade). As Rice University transforms the space, it is making way for four cool restaurants — thinking makes folks hungry after all. Included in the plans are a bakery expansion, Afro-Asian centric locale, Latin flavors and brick & mortar space for a creative chicken food truck. Ryan Kasey Baker shares a preview of the restaurants below.

Rice University is transforming the former Sears in Midtown into a technology hub with storefront space for several local restaurants.
View on Facebook

Houston Food Finder1 hour ago
ICYMI: Space Cowboy HTX has expanded hours AND added a $20 pool pass for its island-themed atmosphere. These perks are in addition to existing cocktail and food specials. Catch all the tasty details below!

Houston Food Finder with Harold's Restaurant, Bar & Rooftop Terrace at Harold's Restaurant, Bar & Rooftop Terrace.1 hour ago
Harold's Restaurant, Bar & Rooftop Terrace
Brunch is better when it has style! Be amazed by four beautiful and talented Houston drag queens — Chloe Crawford Rose, Queen Persephone, Jewel Queen and Carmina Vavra — during Harold's inaugural Belle’s of Brunch event! Enjoy their live shows on Sunday, June 26, while dining on delectable Southern dishes and sipping fresh cocktails. Must-try bites include the Big Nasty Biscuit with buttermilk fried chicken, cheddar cheese and sausage gravy, and the Creole Benedict that features a biscuit topped with beef debris, poached egg and Creole hollandaise. Complete your meal with mimosas, sangria, Bloody Marys and craft beer. Brunch is served 11:30 a.m to 3 p.m. with performances from 11:30 a.m. to 12:30 p.m. and 1 to 2 p.m. There are two ticket packages, each including a two-course brunch. The Basic is $40.95 with one mimosa included, and the Platinum is $55.95 with a cocktail or mimosa carafe. Call for more information, or make reservations via the link below.
https://www.haroldsheights.com/store/product/harolds-Belles-of-brunch/
1    View on Facebook