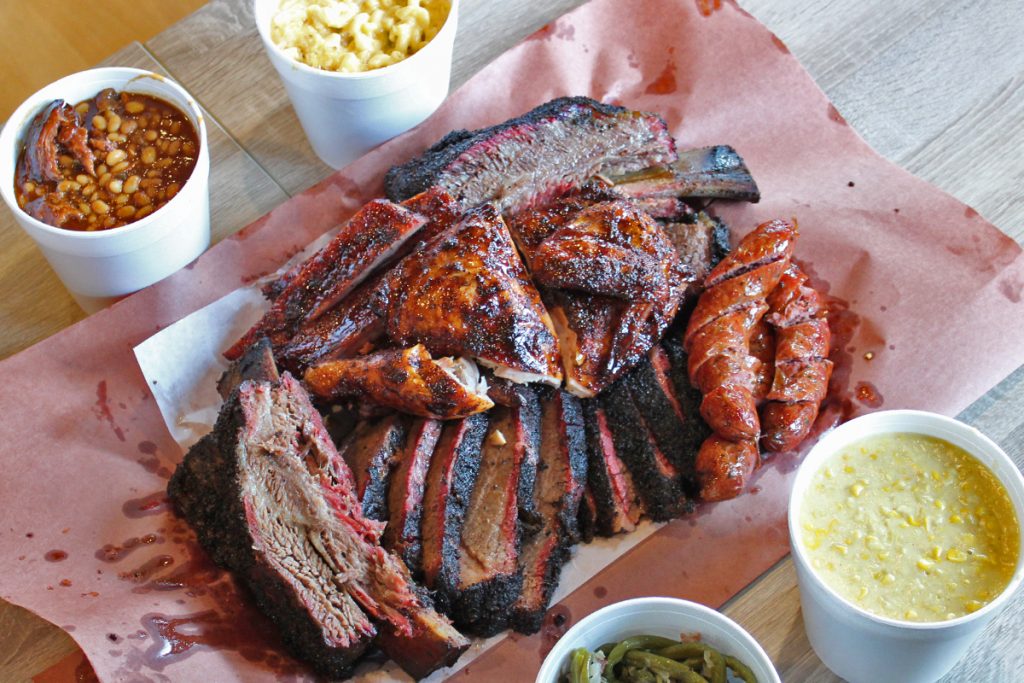 Killen's Barbecue has made the switch to a higher-quality brisket product from Snake River Farms. Photo by Scott Sandlin.

Chef Ronnie Killen of Killen’s Barbecue in Pearland has changed the type of beef being used for brisket, upgrading to the higher-than-prime American Wagyu Black Grade from Snake River Farms in Boise, Idaho.

The per pound price will be $22, a $2 increase from the previous brisket sourced from Creekstone Farms, which supplies meat to other popular Texas barbecue joints such as Franklin Barbecue and CorkScrew BBQ. “The primary motivation was to get a brisket with improved marbling and a beefier flavor,” said Killen, who also noted that he had also been previously receiving briskets of inconsistent sizes. The new version was presented to media representatives to try last week.

Samples were provided from both the point and the flat, which provided a chance to gauge the texture and flavor of both cuts. The flat (or lean) sample retained a good level of moisture and had a distinct beefy flavor throughout. A higher level of marbling than most lean brisket was evident. The point (or moist) sample was thick, juicy, heavily marbled, yet still held together well.

Whether or not the customers will notice the difference in flavor remains to be seen. Inconsistent sizes aside, Creekstone Farms’ product is widely regarded as high-quality meat. Killen’s expectation is that the Snake River Farms product will improve the overall consistency between batches coming off the smokers.

Snake River Farms briskets rate higher than USDA Prime, a grade granted to just the top two or three percent of beef evaluated in the US. The Black Grade Brisket is American Wagyu crossed with Angus and has no added hormones. Due to the extensive marbling throughout, Snake River Farms grades their briskets using the Japanese Beef Marbling Scale (BMS), where the Black Grade receives a BMS rating of 6 to 8.

Snake River Farms of Boise, Idaho, was founded in 1968 and is part of Agri Beef Co., a family-owned and operated business. Snake River Farms contends that cattle raised in the Northwest in a more temperate year-round climate have distinct advantages over other cattle raising regions by keeping the cattle more comfortable throughout all seasons. The areas also provides access to a more diverse range of feed ingredients, which they believe results in beef that’s more flavorful.

The change in meat follows the release of Texas Monthly’s Top 50 barbecue joints list. Despite an excellent 4.5 out of a possible score of 5, Killen’s Barbecue was not among the top 10. (Note that places that did make the top 10 beat Killen’s Barbecue by a mere quarter of a point.)

In a Facebook post just ahead of the publication revealing its top picks, Killen seemed to already know that his restaurant wasn’t going to be among the 10 best, writing, “As time and our popularity grew we in my opinion cooked too much food and tried to please too many people and our quality and consistency suffered.” This move to a new meat purveyor seems a proactive step to climb back to the very top.

Regardless, what certainly hasn’t suffered at Killen’s Barbecue is the long line of patrons waiting for a taste of big beefy ribs, loose-grind smoked sausage in snappy casings and the signature creamed corn. Killen seems to now have a sense of humor about his barbecue joint’s top-50-but-not-top-10 status in the Texas Monthly list. After posting another photo of the usual line of people streaming out the door last week, Killen wrote, “Not a bad line for falling out of top tier BBQ.”

Disclosure: The author has a sales affiliate relationship with Snake River Farms.