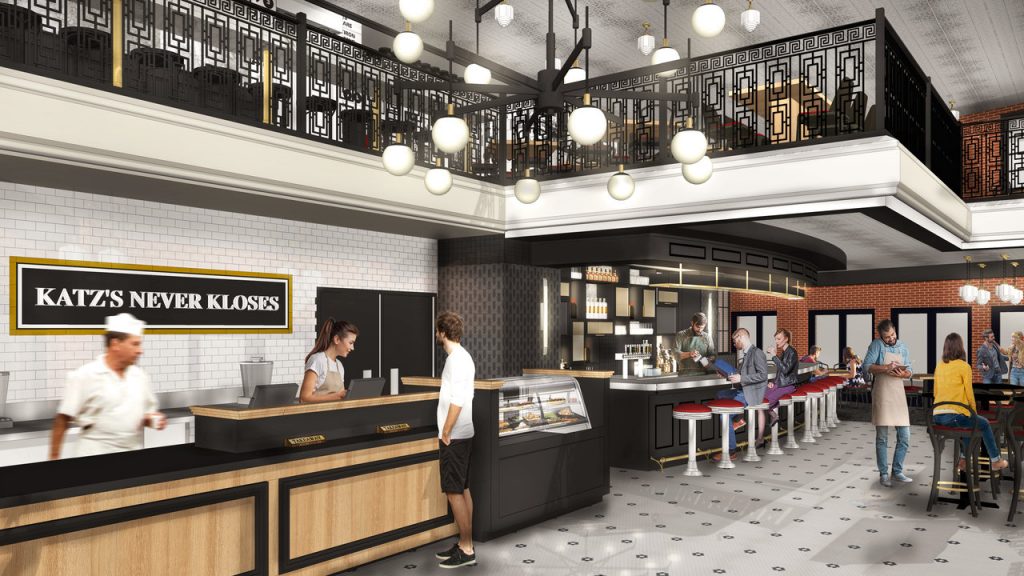 Don't worry, Katz's won't "klose" during its upcoming remodel. The new look is sleeker and brighter, but the deli plans to keep its beloved neighborhood vibe. Rendering by Office of Architecture.

Everyone knows “Katz’s never kloses,” and that’s been true of the Montrose deli mainstay at 616 Westheimer since its opening 20 years ago. To mark that milestone anniversary, the beloved 24-hour establishment is debuting a new look next month.

Renderings show a sleek interior that’s brighter, lighter and designed “to take Katz’s into the future by thoughtfully meshing the old and new,” according to the press release announcing the face lift. Even during the remodeling, Katz’s is staying open. A representative for the company says that construction is being done in three phases. It started upstairs, the downstairs is currently being worked on and (guests dine upstairs now) and then the entry way is being completed mid-April.

The extensive overhaul includes improvements to both floors, and is helmed by Austin designer Michael Hsu, who Barry Katz met shortly after opening the restaurant in 1998. The renovated space will be a polished take on a traditional Brooklyn diner.

“Elements of this project are a long time in coming, and the process has reignited my passion for this business,” said Katz, who followed in the footsteps of his restaurant family beginning at age 12 and ran the original Katz’s Austin Sixth Street location with wife Lisa for many years. “Guests are in for a treat, and the proof will be in the pickle, as we’re not just remodeling the space, but rather reimagining and enhancing the concept.”

He’s particularly excited about the installation of a custom brass Warbach chandelier at the entrance. The original subway tile walls and penny tile floors will stay. Those elements provided inspiration for new enhancements, such as a tile mural at the front counter and a black-and-white palette that will be offset by pops of primary colors.

The main dining room’s walls will be layered with vintage photographs and graphic artwork inspired by Manhattan street and subway signage. The bar area will boast an antique mirror backdrop and mixed metal custom shelves. Katz’s is also adding a community table to the bar space. Upstairs seating will open to the floor below, with roomy diamond-tufted booths in red leatherette, paired with old-school diner chairs.

Of course, it’s only fitting to have something exciting to eat in the refurbished digs, so there will also be a new menu of bar bites. Available nightly until 2 a.m., the small plates are $5 per item during happy hour. The initial offerings include loaded chips, fried pickles, a Potato Stack with lemon-feta sauce and a Duo of Reuben or Beef Sliders with housemade chips. The drink menu has also undergone a thorough refresh; expect “Kraft Cocktails” like the SATC Cosmo (an homage to the TV show “Sex In The City”), the Texas Palomita; and a rotating Mules section.

New dishes for the regular menu are still works-in-progress, but Katz assures his diehard fans that the signature items — including the housemade brisket, matzo ball soup and the black and white cookie — aren’t going anywhere.

Once the remodeling project wraps up, Katz intends to turn his attention to expansion. That includes scouting locations to add to Montrose and The Woodlands, where he converted the former Katz’s Express to full-service last spring. In other words: there may be another new chapter in the Katz’s story soon.