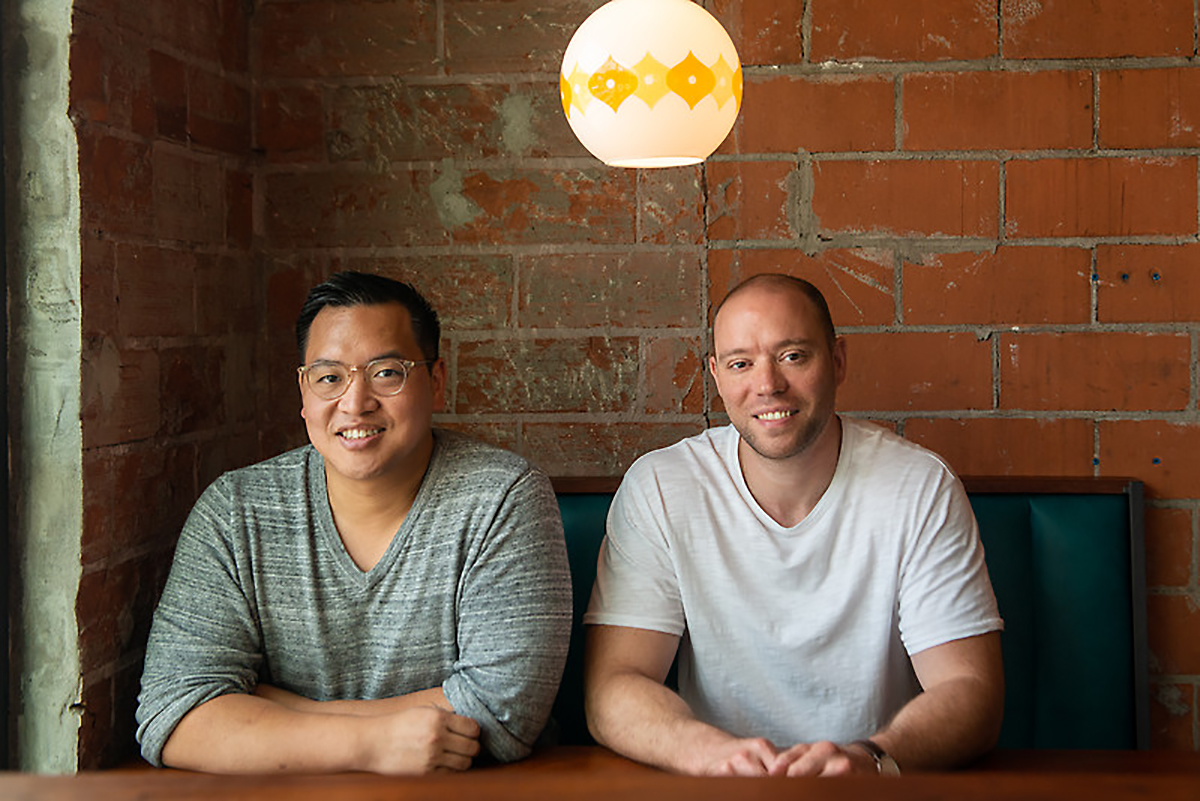 James Beard Award-winning chef Justin Yu and bar and restaurant owner Bobby Heugel are consulting on the food and beverage program for a new Galveston hotel. Photo by StarChefs.

When announcing that he was closing downtown Houston bar The Pastry War, Bobby Heugel said that he and award-winning chef Justin Yu, who co-own Squable and Better Luck Tomorrow in the Heights, “have a big project planned for 2022 that will require tremendous focus.” That project is now revealed. The duo are overseeing the food and beverage programs for Hotel Lucine, which is expected to open in Galveston next summer, and are also partners in the overall operation.

Located at 1002 Seawall Boulevard, Hotel Lucine is taking over and remodeling a building that was Treasure Isle Motel in the 1960s and most recently Pearl Inn. It’s the oldest existing mid-century motel on the Island; one of many that cropped up during that era to serve road trip-happy Americans. According to a press release, the design concept is “a lively, people-centric atmosphere that promotes gathering and shared experiences.” Some of the areas facilitating all of this socialization are a pool, a patio and The Den — a multipurpose area where guests can grab their morning coffee, a light lunch or an evening cocktail. There will also be a rooftop bar with unfettered views of the Gulf of Mexico and surrounding parts of Galveston.

Austin-based Kartwheel Studio, founded by David Clark, is overseeing the design for the hotel remodeling, and the materials being used include “white brick, bleached white oak and native greenery.” Interior design elements include aged bronze, antique mirrors and reeded glass

“Our vision for Hotel Lucine is an alluring destination for visitors and locals alike, a place that feels refined and modern but still approachable and full of heart and soul like a good house party,” said Jacoby via a press release. “We hope to make it a refuge for culture, fun and culinary and cocktail delights that you never want to leave,” added Marcus.

Because Heugel and Yu are still in the midst of conceptualizing the various programs, there is no specific information available at this time on what kind of dishes and drinks will be available. In addition, there’s another big project on their shared plate: opening a second Better Luck Tomorrow. Regardless of where Yu and Heugel’s imagination takes them, whatever they decide to place on Hotel Lucine’s menus is bound to be interesting.

Houston Food Finder1 hour ago
ICYMI: Here's a great way to lift your holiday spirits, both literally and figuratively: visit a local bar hosting one of the very festive Miracle or Sippin' Santa pop-ups. Ryan Kasey Baker brings us details on the four bars in #Houston and #Galveston that are participating this year.
#houstonbars #galveston #galvestontx #houstontx

Houston Food Finder9 hours ago
It's the last month of 2021, but there's something to celebrate before the new year arrives! Beth Levine brings us the notable new restaurants around town this December.
#houstonrestaurants #houstonfoodfinder

Houston Food Finder2 days ago
Christmas is coming early, kids — well, at least for some of you. Only 30 of the Holiday Goodie Boxes remain for individual purchase after fulfilling our Patreon subscriptions. We start shipping on Wednesday, so don't sleep on this!

Houston Food Finder2 days ago
The winner of a free Holiday Goodie Box is Eating with Stephano! Everyone who posted an unboxing video or photos from the Autumn Goodie Box and tagged with #hffgoodiebox was entered into the random drawing. Congratulations to our winner! You can watch Stephano's unboxing video of our Autumn Box at the link below.

The Holiday Goodie Box goes on sale later today! Only 50 are made and we do expect these will go especially quickly since it's gift-giving season. If you want to be among the first to be notified when these go on sale, please either leave a comment below, send a direct message or email info@houstonfoodfinder.com. Thanks to all of our goodie box sponsors and supporting readers!

Houston Food Finder3 days ago
Our friends at Sensible Marketing Solutions created this nifty online magazine with some very good tips on growing and improving your social media presence. Check it out!
https://issuu.com/sensiblemarketing/docs/sbsnmagzinedechanh?

This inaugural issue gives great advice on how to manage your social media sites, along with tips for creating YouTube videos. Our Business spotlight is of Hanh Nguyen the owner of The Perfect Latte and the Charity spotlight is over Katy Cares.
1    View on Facebook