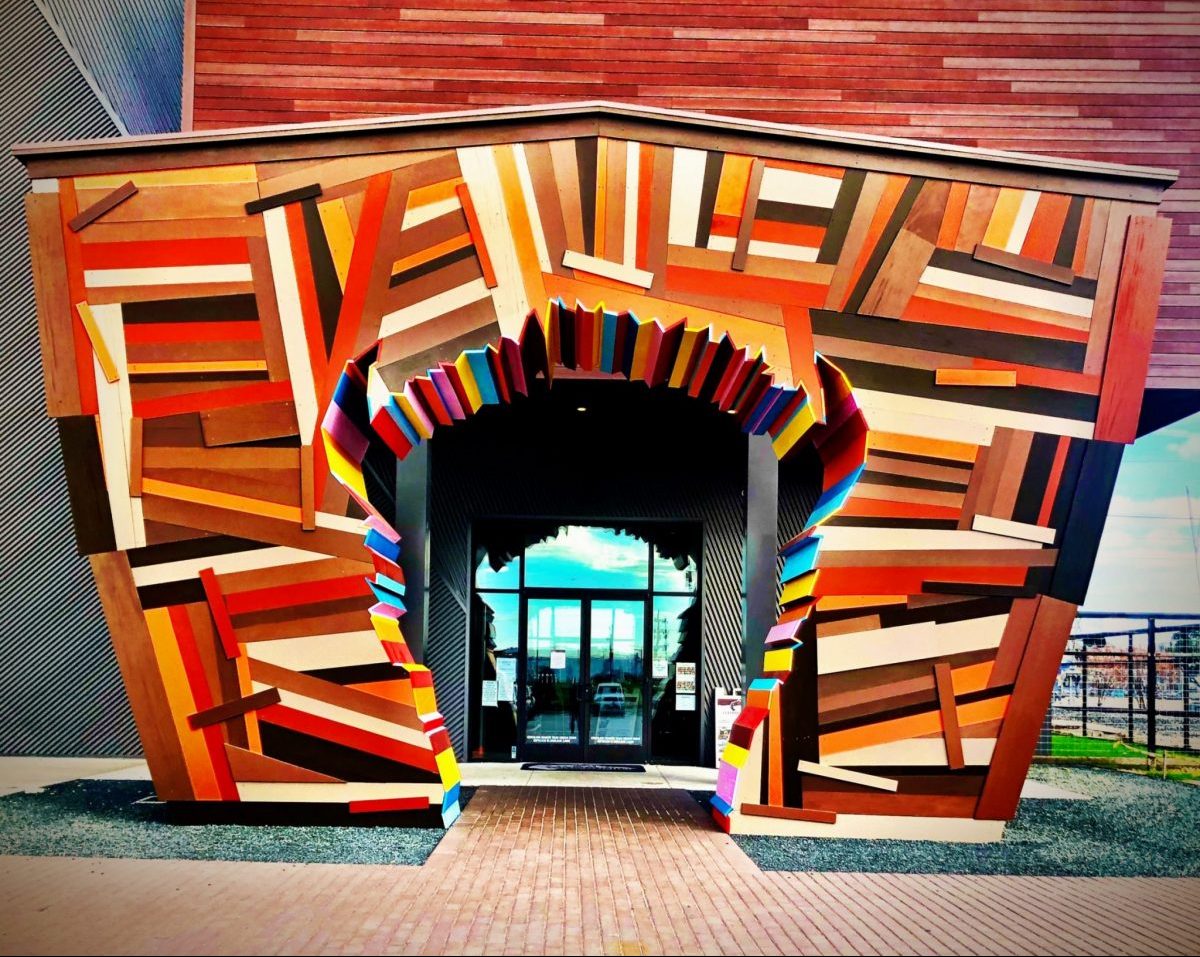 The entrance to Buffalo Bayou Brewery. Photo by David Leftwich.

Republic Investment Services LLC, which acquired NextSeed in late 2020, has sent nearly concurrent default notices to investors in three Houston companies: Railway Heights Market at 8200 Washington, Shoot The Moon at 8155 Long Point and Buff Brew Tap Room (the restaurant and bar endeavor of Buffalo Bayou Bayou Brewing Co. at 2101 Summer). All were funded, at least in part, when NextSeed was still a standalone company. Two of the businesses, Shoot The Moon and Railway Heights, have been open less than a year, while Buffalo Bayou Brewing Co.’s restaurant and tasting room is just over two years old.

NextSeed — and now Republic Investment Services — specializes in crowdfunding startups with very low financial barriers to entry. The minimum investment for Shoot The Moon, for example, was $100. As NextSeed, the company raised $1 million for Buff Brew, $409,000 for Shoot The Moon and $1,112,900 for Railway Heights from numerous private investors.

As it stands, the notices — which all follow the same format (see example at the end of this article) — state, “As collateral agent on your behalf, Republic Investment Services LLC (f/k/a NextSeed Services LLC) has been working with the [company name] team to find a path to maximize the return of capital to investors.” It’s unclear as to what course of action Republic Investments Services would embark upon to secure returns of capital.

We spoke with Kevin Floyd of Shoot The Moon regarding the notices Republic Investment Services sent to its over 400 private investors. “It’s unfortunate. We were given a little advance notice that this would happen, but not a lot,” he said. “We’ve been in communication on a monthly basis with Republic. We post transparent updates to the backer community so they know where we’re at. We’re going to have to hire counsel to deal with this at this point, which is really a shame, because every dollar that I spend to deal with this is a dollar I’m not going to have available to spend on payroll, rent or to pay investors. If NextSeed gets very aggressive with this, I can see a scenario that forces us into bankruptcy, and then there would be no way to pay the investors back.”

We asked Floyd if he knew what the deadline was that triggered the sending of the investor notices. “We didn’t have clear deadlines,” he said. “Under the revenue sharing notes we had with NextSeed, we’re obligated to use a percent of gross revenue every month to pay back the investors. We’ve not been in a position since the day we opened to make payments. Every month, we submit documents to NextSeed to show what our sales are, and we have a conversation with them about how things are going.” In a typical investor situation, businesses pay percentages from net profit, not gross.

Updated, 4/28/22, 12:18 p.m.: We had many questions for Abe Chu, co-founder and Chief Marketing Officer with NextSeed (and now with Republic), regarding the terms of the investments. While he declined to make many comments about the specific businesses, he did agree that Floyd has been transparent and gives regular updates. Chu additionally confirmed that the expectation is for investment recipients to make monthly payments from gross revenue, not net profits. “That is established from the beginning,” he said. “Doing profit-sharing with small businesses would be a much bigger challenge. If you are looking for a monthly accounting, that would be a much bigger burden on businesses. Revenues are simply an easier metric to capture and more straightforward. Profit sharing with equity investors is a very different type of investment, and they get paid out of the back end from profits. Our investors are not in it for the long haul. They’re in it for usually five years or less.” (It’s arguable as to whether five years is a long haul. For some restaurants, five years could represent an entire business lifespan.)

In short, a NextSeed/Republic crowdfunding investment behaves more like mezzanine debt. “It’s something that payments should be planned around, like, for example, a bank loan,” said Chu. “A bank loan would take priority in terms of payments, and it falls in line in terms of how an operator needs to think about planning their budget.”

A significant reason for the investor default notices on multiple businesses all going out at the same time: Chu says that NextSeed deferred sending many notices during 2020 and 2021. “At the beginning of the pandemic, we notified all investors that we were not planning on sending default notices, let alone enforcing them, for the near-term due to the economic impact [of the pandemic]. As the pandemic continued rolling along, we had to continue adapting our policies.” Clearly, that grace period has now ended.

The pandemic also meant that NextSeed was not engaging in one important business-support activity: events. “We integrated businesses into our events and offered opportunities for owners to connect with more people in the investor community. We showcased businesses in different ways, such as hosting panels. All of that was meant to foster the community, post-campaign as well,” said Chu.

Restaurants and bars have faced extraordinary challenges over the past few years. Both Railway Heights and Shoot The Moon were built out and opened during the pandemic. Buffalo Bayou Brewing had only been open about five months when the pandemic-driven shutdowns started in mid-March of 2020. The pandemic’s ongoing impacts include a mass exodus of hospitality industry workers, supply chain shortages and increased material costs. Under even good circumstances, it’s not uncommon for businesses to not reach a break-even point until year two.

A recent visit to Railway Heights Market revealed that road construction had cut off access from one side of Washington Avenue — right in front of the establishment. During my visit, a vendor commented that the construction block cut off the direct route from a nearby neighborhood that previously had been a regular source of business.

Buffalo Bayou Brewing Co. and Company of Nomads, the owner company of Bravery Chef Hall and Railway Heights, also have been highlighted by the @welp_713 Instagram account, which publishes anonymous complaints from industry workers about both companies. These are published in the account’s Instagram highlights under “Rassul Zarinfar” (one of the co-owners of Buffalo Bayou Brewing Co.) and “Anh & Liam” (two of the co-owners of Company of Nomads). While the allegations are anonymous and unproven, these are available online for anyone to read. It’s unclear as to whether the claims have led to reduced business for either company.

Although they may not have yet reaped monetary gains, some investors have received measurable material rewards. When Shoot The Moon’s campaign stalled around the $140,000 mark, Floyd says the only suggestion NextSeed representatives had for reinvigorating it was to offer backers free beer like Buffalo Bayou Brewing Co. did (one free beer a day for life for those who invested at least $1,000). As a restaurant, Shoot The Moon could not legally offer free beer, so instead Floyd offered free pizzas every month. NextSeed investors get a $52 monthly credit, which equates to about two or three pizzas, depending on the selection. The strategy worked and pushed total investments to over $400,000.

However, there were substantial costs involved, including marketing costs for the campaign, postage for shipping backer rewards, such as pint glasses and the cost of the rewards. Floyd says he had to hire a developer to create a database to track the free pizza program. The biggest cost, though, were the fees paid to NextSeed, which took a higher percentage of investor contributions that came to its portal instead of from Shoot The Moon’s website — regardless of whether it was Floyd’s marketing and promotion strategy that sent them there. All told, Shoot The Moon only netted approximately $329,000 of the $409,000 raised, according to Floyd. “It cost us about $80,000. In that is the fees to NextSeed, the cost of backer incentive fulfillment — swag and shipping — marketing and management.”

That doesn’t even include the ingredients or labor for the free pizzas given out every month — a program that Floyd still intends to maintain for the company’s backers unless he’s advised otherwise by an attorney.

With NextSeed/Republic receiving a percentage share of the investments up front, Chu says that while the company has no financial risk, there is another kind. “Investors are looking at our platform holistically, not as, ‘Well, you’re just a platform.’ So, the risk is reputational risk. That’s why we perform due diligence with each business to ensure there’s not just an idea, but a plan to move forward. We’re protecting investors through the process.” Additionally, if a company is not making its payment, Republic has to perform additional work, such as sending default notices.

What will happen to these businesses with hundreds of investors who just received default notices? In the short term, probably nothing. “Issuing these notices is a process point. It’s meant to let investors and the businesses know that we are monitoring the payments,” Chu said. “Based on the investment documents, our job is to stay on top of it. Businesses have a couple of months to catch up before they are in default of their obligations, but that is not to say that we’re enforcing that immediately. That’s not the goal. The goal is to find a long-term path for the business to be successful and for investors to get their payments.”

However, if Republic decides to enforce the default notices, it could exercise the liens built into each of the contracts, and start looking for assets to liquidate.

Would these owners use Nextseed, or Republic Investment Services, again to help fund their business endeavors, knowing what they know now? “I’m not an expert in the field of crowdfunding,” said Floyd. “I don’t know if NextSeed/Republic is indicative of the larger crowdfunding community, or if it’s an anomaly. That being said, I didn’t have a lot of options for access to capital at the time. Access to capital is probably the number one thing that presents a challenge to small business today, in particular, the restaurant industry. Traditional banks aren’t going to touch us, so we’re left to alternative financing.”

The situation, with Republic sending notices to hundreds of investors also highlights a surprising risk of crowdfunding versus more traditional routes of dealing with angel investors, venture capitalists or banks. When there’s a problem, it quickly becomes public.

This is a developing story and will be updated as further information becomes available. Below is an example of the notice sent to Railway Heights, Shoot The Moon, Buff Brew Tap Room and Bravery Chef Hall.