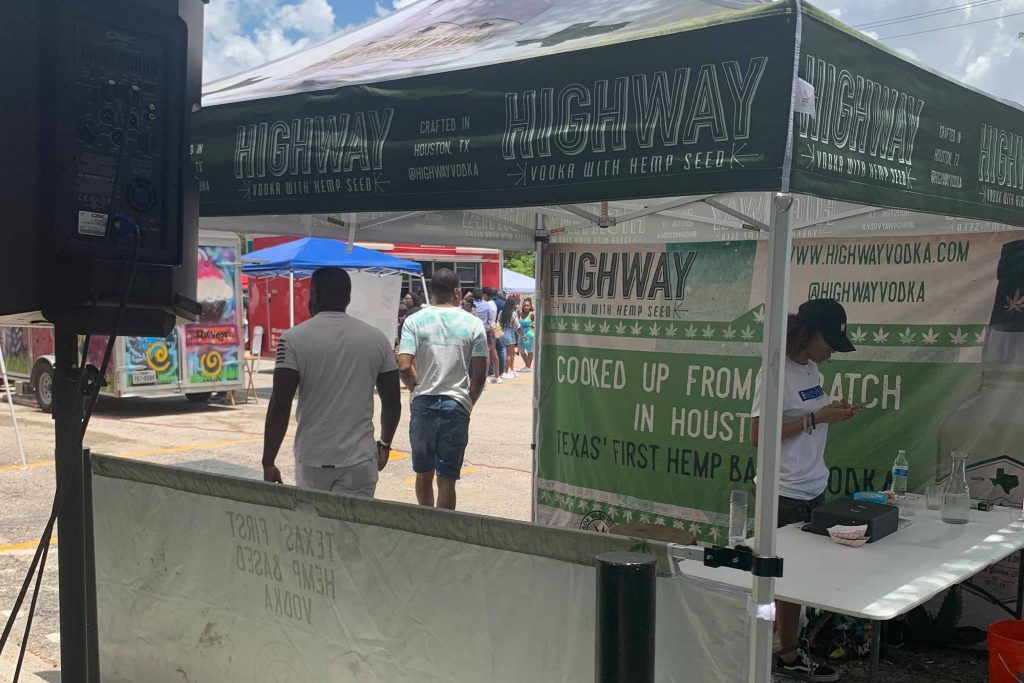 A photo of the entrance to the Houston Brunch Festival shows only one volunteer checking tickets. There were approximately 500 attendees. Photo courtesy of Clara Ibe Luciano.

The first Houston Brunch Fest (sometimes also styled “HTX Brunch Fest”) was held on July 20 in downtown at Isles Eatery & Rhum Bar at 1515 Pease. The event organizers, which included consultant and entrepreneur Bruce Bray, advertised that the festival would include over “20 restaurants and chefs” but the event dramatically under-delivered, generating a spate of very bad reviews. One reviewer on Yelp described it as “the Fyre festival of brunch events” — and there are dozens of other complaints on Instagram, Facebook and Twitter.

At least, there were a lot of bad reviews until the organizers apparently deleted the Facebook page and shut down commenting on Instagram. The Yelp page also now longer shows reviews and the page itself displays as “unclaimed.” Prior to the Facebook page disappearing, Houston Brunch Fest has a one-star review. The complaints included a long wait to get into the festival, lack of food vendors and the event staff’s poor communication and lack of concern about problems onsite. Houston Food Finder was provided several different screenshots of the complaints before these mysteriously disappeared.

They deleted the Facebook page, because of how many negative reviews it was getting. If you comment on anything photo Instagram, they’ll delete it. They’re still posting photos/videos of the event as if it was successful

While there are many excellent food and drink festivals in Houston, the Houston Brunch Fest is not the first one to draw so much consumer ire. In August 2017, the Southern Fried Chicken Festival held in Levy Park left many chicken devotees fuming from the long lines, poor parking and lack of actual fried chicken at the event. The festival did return a second time on June 1, 2019 but only inspired one positive review on Facebook. At the July 2015 Best Damn Food Truck Festival at NRG Park, enthusiasts experienced long lines to enter the festival, trucks running out of food and no shade or water provided. Many of the Yelp reviewers for the event speculated that tickets were oversold. In 2011, the inaugural Houston Beer Festival held in Hermann Square Park was oversold by 8,000 tickets and, as a result was understaffed with volunteers.

Screenshot of review on Houston Brunch Festival’s Facebook page, which has been deleted.

Similar complaints were made online about Houston Brunch Fest. Ticket holders consistently mentioned an over 30-minute wait to enter the festival, significantly fewer food purveyors than the 20 advertised and that there was a single bartender responsible for pouring “unlimited” mimosas. General admission tickets cost $25 and didn’t include any food or drinks, while VIP tickets were $60 and included three food samples and unlimited mimosas. Furthermore, the three food tickets that VIPs received could only be used between 11 a.m. and 1 p.m. For an event that was supposed to run until 6 p.m., this was a mighty small window of opportunity — especially considering how hard it was to actually get any food thanks to the few vendors and long lines.)

Houston Brunch Festival attendee Tara Whitaker said she purchased VIP tickets but from the sounds of it, it wasn’t a VIP experience. “I waited 40 minutes [to enter the festival] only to go immediately into another line for mimosas since there was only one station with one person pouring one at a time for all 500 people,” she said. “There was nowhere near 20 restaurants and vendors, but three food trucks and only two of those were open while we were there.  We left after seeing ‘volunteers’ sitting around smoking cigars and an organizer rudely turning around and walking away from someone who was voicing their same concerns.”

Whitaker requested a refund for her tickets from Eventbrite and received a reply from an organizer with Bray Consulting Firm.  “They called me a liar saying they delivered everything advertised,” she said.

Strangely, despite the complaints, both the Houston Press and the Houston Chronicle published recaps that had nothing but praise for the festival. We contacted the writers of both articles to ask about their experiences and observations. We have yet to receive responses but pictures published from the event show happy patrons with mimosas or other drinks.

The lack of food purveyors put enormous pressure on the ones who did show up. One of them, chef Jacklyn Davis of Houston Hamptons Brunch Company, says she was hired a month before the event to provide food for the VIP guests.  “I was contacted by Bruce through Instagram. I brought on my publicist and partner in marketing because they didn’t have any professional team members prior to my joining, just a room of ideas. So I added cooking demos and my publicist did promo to get tickets sold,” Davis stated. “The day of the festival we immediately saw issues, but I was already tied to the event so I had to follow through. Things didn’t turn out the way they were supposed to, but it wasn’t a scam. I delivered free food to people, even non-VIP ticket holders and everyone got mimosas as promised,” she continued. “The downfall was in the number of food vendors that actually showed up. We were short five vendors so the variety of food wasn’t there and we couldn’t keep up with demand. The production team fell short behind the scenes, but it wasn’t to scam people. It was just lack of help and planning.”

Phi Nguyen of The Waffle Bus food truck said that while he personally didn’t attend, his staff complained that the festival “didn’t deliver on its promises to guests.”

Operations manager Leslie Hall of Isles Eatery & Rhum Bar, wants to make clear that her company had no involvement in the festival planning or execution. She said that they had “no part in orchestrating the event”, and that they were only providing space.

Event organizer Bruce Bray agreed to speak with Houston Food Finder about the problems and perhaps the most positive aspect of this story is that he was quite candid that things didn’t go as planned and says he wants to handle aspects of running an event differently in the future.

“I definitely learned a lot from this event and I’m taking all of the criticism so I can make Brunch Fest more successful next year. For one, the venue and staff wasn’t sufficient and we should have had multiple lines for the mimosas. We also needed more vendors. I had four vendors pull out three days before the event,” he said. “There were 600 pre-sold tickets and at 10:45 a.m. that morning there was a line around the building [because] everyone showed up at once,” he continued. Bray sounded optimistic about the negative criticism online, claiming that it was only a few people who were upset and seems to believe the event was a success. (For the record, over two dozen people are identified in the screenshots of negative comments on websites and social media received by Houston Food Finder.)

“I’ve given refunds to 12 people who have emailed me and anyone else who contacts me will get a free ticket to a future event. But I’ve only received 12 requests for refunds,” Bray said. Guests who are dissatisfied with the event can email [email protected] for more information about said future events and their tickets. (However, Bray didn’t say which event and would not disclose any details about future events he’s hosting.) Bray also said that 20 percent of the proceeds were to be donated to the Houston Museum of African American Culture on Friday, July 26 once Eventbrite released the funds collected from ticket sales.

This event wasn’t a pure scam like the Hot Garlic Crab Feed or other fake events that the Better Business Bureau issued a recent warning about, but it is a reminder to be careful when choosing events and purchasing tickets.

CultureMap’s Eric Sandler wrote a useful guide on how to spot a scam that was inspired by blogger Jakeisha Wilmore, who went on a lengthy recap on Twitter about the Houston Brunch Fest. To avoid falling prey to similar experiences, would-be attendees should look for events held by trustworthy charities or organizations because they have a vested interest in the event being successful. Those with a proven track record of successful events, as well as those affiliated with big names in the local community, are more likely to inspire confidence. In contrast, the organizer listed on the Eventbrite page for Houston Brunch Fest was Diiverse Entertainment, which has only hosted two events via Eventbrite and very little information that turns up on a Google search. While there is a Facebook page, the most recent post is from 2016.

Another warning sign for  the Houston Brunch Festival was the omission of information on exactly which “20 restaurants and chefs” were going to be in attendance. Publicity efforts for an event should be specific about vendors, entertainment, parking and other details.

Those looking for a proven brunch festival can check out the Houston Press’ Morning After Brunch Event on September 29 at the Bayou City Event Center Pavilion. The fifth annual Southern Smoke Festival, organized by local celebrity chef and James Beard Award winner Chris Shepherd, is one week later on October 6. It is at The Hay Merchant and features respected chefs and pitmasters from around the country who are convening in Houston for food and fundraising. In other words, Houston has a plenty of well-organized and worthy events to attend each and every month, so those who enjoy food and drink festivals need not give up on the concept. They just need to do some homework before clicking the purchase button.

Houston Food Finder with Pearland Convention & Visitors Bureau.1 day ago
Entice your taste buds with an extravaganza of Asian flavors in Pearland! Try Chinese, Thai, Korean, Japanese and more — there is even an intriguing fusion locale that serves an egg roll wrapped inside a spring roll! Try sushi and create-your-own Mongolian bowls at Mongo Grill, sweet and tangy red snapper and soft shell crab curry at Thai Spice, or a wild & wonderful Epic Wrap stuffed with a variety of fillings — including an egg roll — at Wrap & Roll. Visit the Pearland Convention & Visitors Bureau dining web site, https://visitpearland.com/places/category/asian-1/, for the full list of can't miss locales and more information.

Craving Asian food? Browse the many Chinese, Japanese, Thai, and other Asian restaurants in and around Pearland, TX.
60 2    View on Facebook