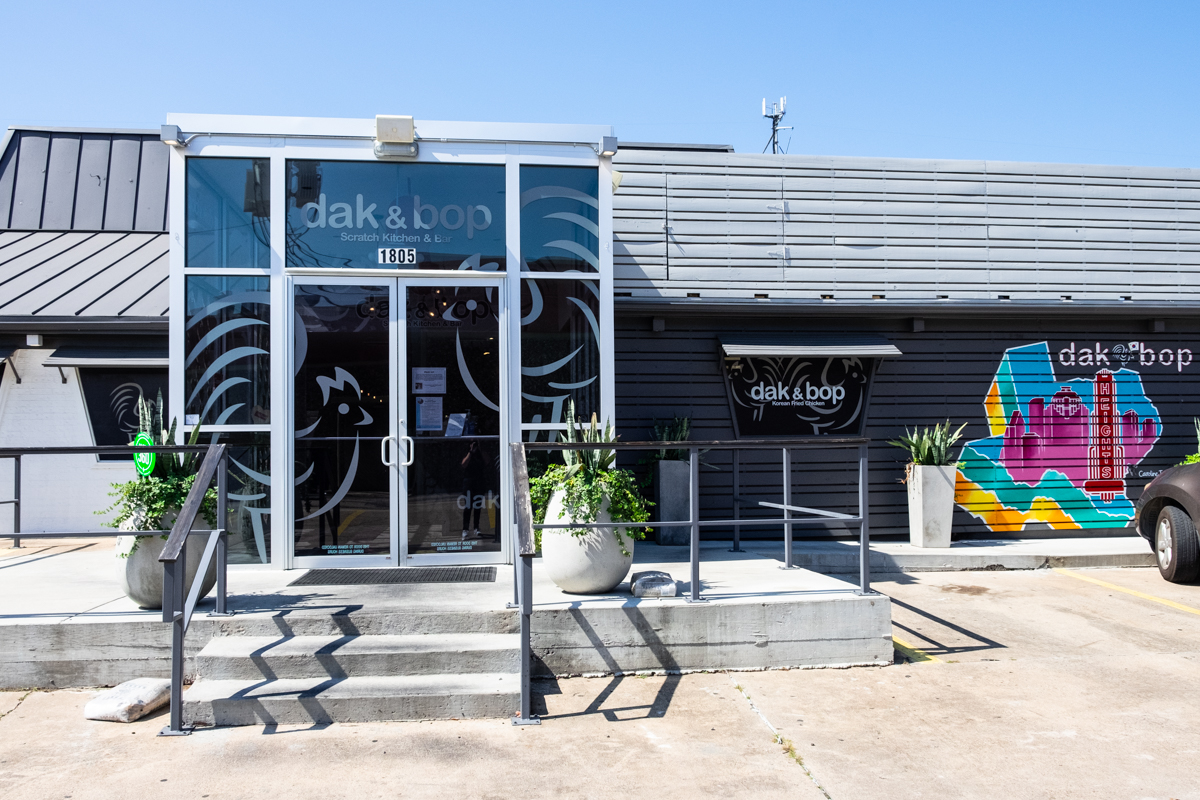 Dak & Bop on 18th Street in the Heights. Photo by Phaedra Cook.

When Jason and Mary Cho opened what was, at the time, the second Dak & Bop location, they faced more challenges with the building than expected. The restaurant at 1805 West 18th — which is now the only Dak & Bop in Houston since the original in the Museum District closed — was initially delayed by a power line explosion. Then, the COVID-19 pandemic hit as it was starting to garner acclaim for its Korean fried chicken, as well creative dishes by chefs Jordan Economy and Matt Wommack and plated desserts by pastry chef Zed Benak — such as his latest creation: Black Sugar Cheesecake with gingersnap and panko crust served with Chinese 5 spice apple butter spread and whipped cream and candied oranges. Then two weeks ago, it had to close due to severe water damage. The restaurant reopened October 4 for lunch and dinner.

The damaged occurred when the ceiling of the aging building, a former Pizza Hut, collapsed due to rain. The water damaged much of the sheetrock. “Unfortunately, insurance didn’t cover anything and all the costs are out of pocket,” explained Jason Cho.

To help offset the cost of this expensive setback, the Dak & Bop team launched a GoFundMe campaign, in large part to keep paying all the employees. (As of press time, the fundraiser has only received $4,905 of a requested $30,000.) While Dak & Bop remained open for to-go orders, it was inevitable that revenue was going to drop drastically during repairs.

“This construction has once again blindsided us to the point where we are not sure we can keep going,” said Jason. “However, we will do what we do as long as we can because we believe in our concept and we are proud of what we have started.”

Speaking from personal experience: losing Dak & Bop would be a terrible loss. As I expressed 11 months ago, the menu by Wommack, Economy and Benak makes this a must-try restaurant.  It is also hosts a popular Industry Brunch — a good indication of its quality since restaurant and bar folks know where to  spend their hard-earned dollars.

Dak & Bop’s monthly Industry Brunch is normally the first Monday of the month, but due to the repairs, it’s happening on October 11 from 1 to 6 p.m. (Industry pros tend to work late and sleep in.) “The specials are different every time, so most of the Industry Brunch items are only available then, and typically never make a repeat appearance,” says Wommack. “It’s a one of a kind experience. Items could include Octopus Terrine, Frito Pie CFS (chicken fried steak) and Barbacoa Benedict. Drink specials are available also. They usually include Kimchi Bloody Marys and our Gravyback Shot Combo. The full menu is available as well.” With fun and filling dishes like these, it’s obvious why the Industry Brunch is hitting its first-year anniversary.