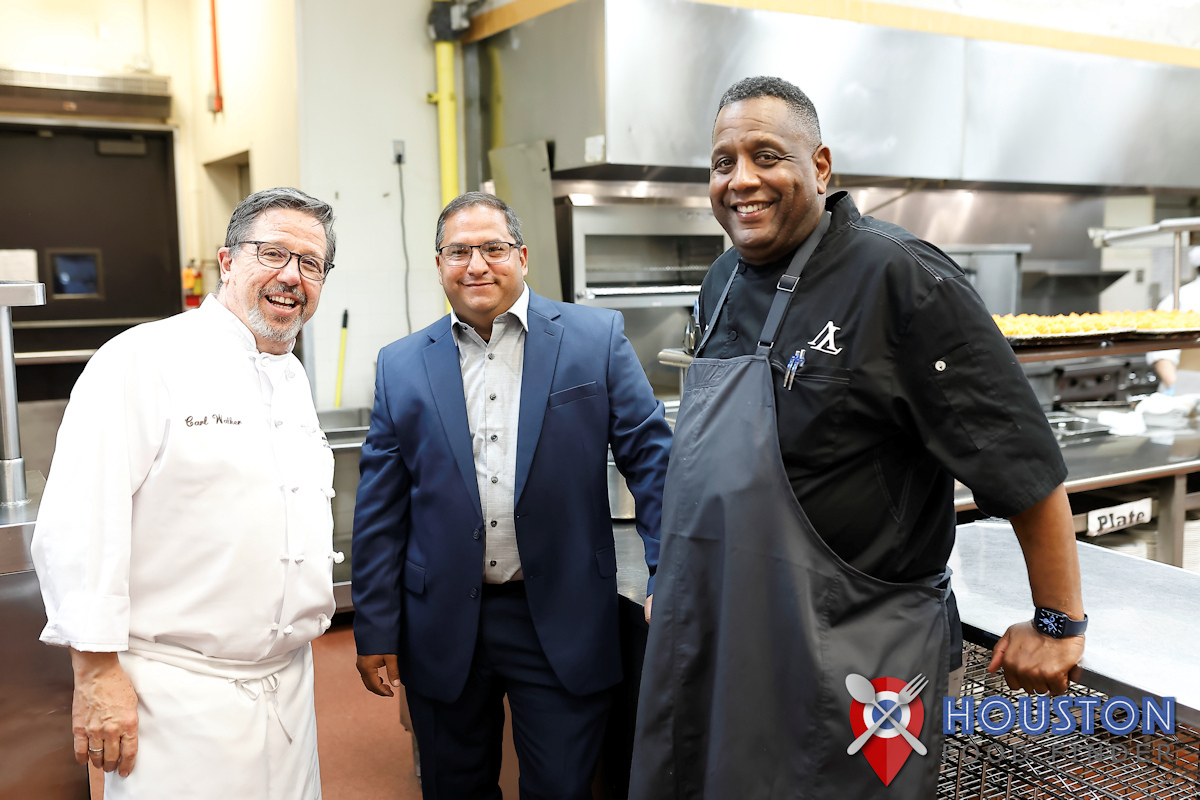 Numerous additional photos by Quy Tran Photography can be found on our Facebook page.

On Tuesday, January 17, the tables were set, food prepped and festive beads ready for wearing at Brennan’s of Houston for Houston Food Finder’s The Perfect 10 Gala. The gala featured 10 chefs and 10 beverage professionals, as well as a pastry chef and local coffee roaster, each selected and invited by Houston Food Finder editor and publisher Phaedra Cook.

Brennan’s spacious, elegant interior was festooned with Mardi Gras decorations. As Houston food fans and business leaders streamed through the iconic entrance, they were greeted by giant carnival masks mounted on the front doors and chandeliers bedecked in sparkly green, purple and gold garland.

A silent auction at the event exclusively benefitting Second Servings of Houston raised $9,000. The non-profit organization rescues perfectly good prepared and perishable food that would be tossed in the trash and redirects it to Houstonians in need. Thank you to the numerous Houston businesses and individuals who donated items for the auction!

Despite its over 55 years in business, this was the first time Brennan’s of Houston had hosted this type of event. The staff cleared the downstairs dining room of nearly all furniture, reconfiguring it for a VIP cocktail hour from 5:30 to 6:30 p.m. Top Houston chefs, each teamed with either a bartender or sommelier, manned serving stations both inside and outside in the courtyard, delighting attendees with elegant small bites and drink pairings. The featured chefs, sommeliers and bartenders during cocktail hour were:

During the cocktail hour, attendees could duck into the John Staub private dining room and capture the moment thanks to a photo booth and Mardi Gras props provided by Photo Booth Supply Co.

With cocktail hour winding down, it was time to lead the 180 gala guests to the upstairs private dining room in the most festive way possible: with a second-line march accompanied by the same jazz band usually playing  at Brennan’s Sunday brunch.

The featured chefs, bartenders and sommeliers during the seated dinner were:

Pulling off this gala was a huge team effort. We owe thanks to Brennan’s of Houston, especially owner Alex Brennan-Martin — who we surprised when we announced he was our gala honoree for his work as a Houston restaurant industry leader — marketing manager Whitney Guarisco, host chefs Carl Walker, José Arevalo and John Salazar, all of the visiting chefs, sommeliers and bartenders (and, in some cases, their PR representatives for keeping them updated), plating volunteers Edwin Hui, owner of AtCha, chef Richard Knight (previously featured at the 2019 The Perfect 10 Gala), chef Staci Davis (also a former Houston Food Finder writer) and chef Nahum Hernandez.

We hope to offer another The Perfect 10 Gala in 2024. Thanks to everyone who made this one a success!

(The total raised from ticket sales to support Houston Food Finder’s work is not yet available, but we’ll update this article when it is.)