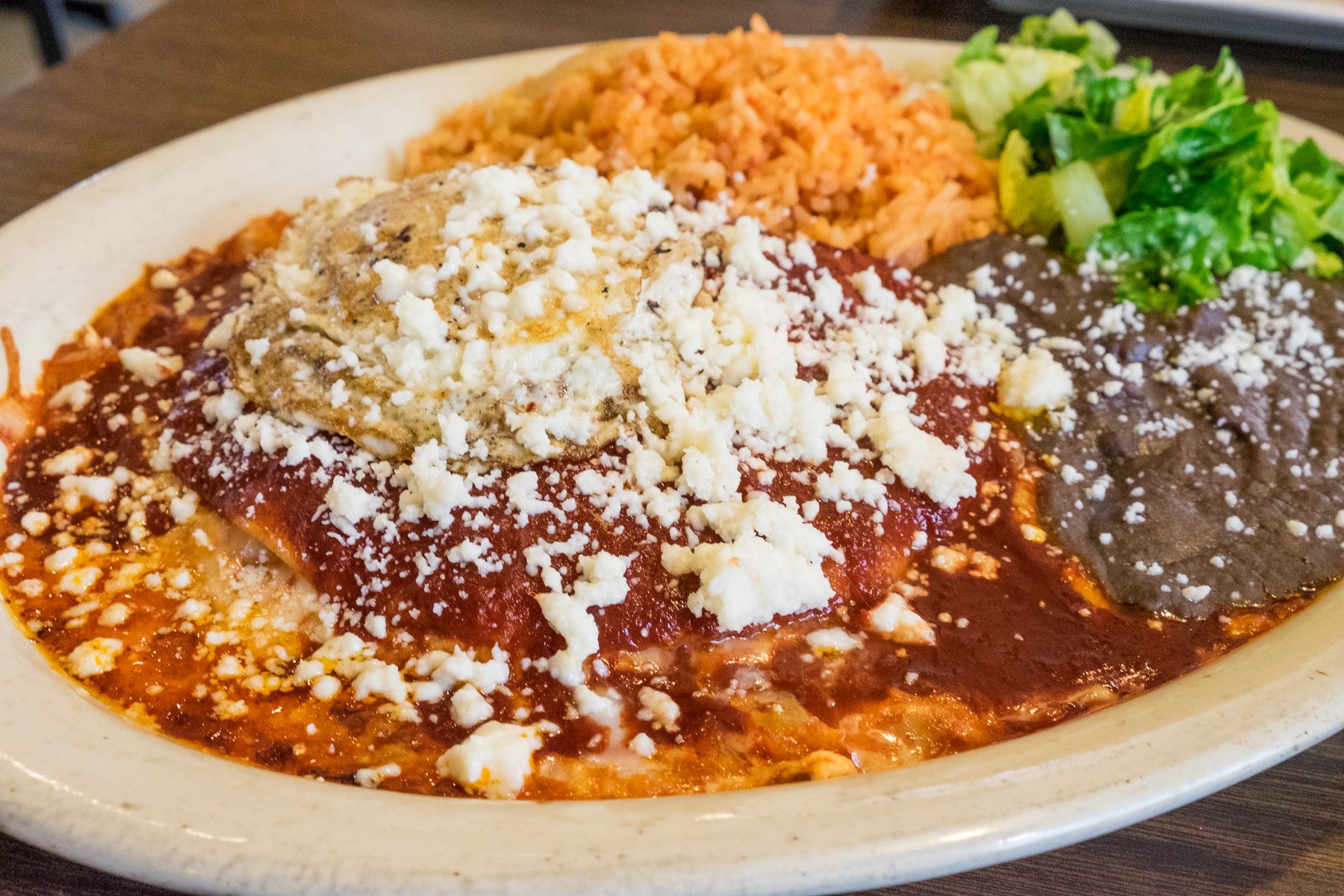 Enchiladas Rojo at Habanera & The Guero. The dish is based on Vanessa Lomeli's grandmother's recipe. Photo by Phaedra Cook.

Habanera & The Guero at 9902 Gulf Freeway, and owned by Vanessa Lomeli and Ben Downing, has earned many fans over its five-year tenure, including the Houston Chronicle restaurant critic, Alison Cook, who first reviewed it (under its prior name, Habanera & The Gringo) in 2015. From 2016 through 2018, Cook also placed it on her Top 100 Restaurants list. Last November, Lomeli was selected as one of the 10 chefs featured at Houston Food Finder’s Perfect 10 Gala. Next up: Habanera & The Guero is getting attention on a national scale when Food Network chef and television personality Robert Irvine comes to town to give it a $10,000 Restaurant: Impossible makeover.

Habanera & The Guero’s menu is based on owner Vanessa Lomeli’s upbringing and the family recipes she learned growing up in El Paso. With the Texas town being right on the intersection of the borders of New Mexico and Mexico, there are multiple culinary influences at work. Habenera & The Guero’s food is not strictly Tex-Mex. Dishes such as Beef Cheek Tostadas, Enchiladas Rojas (based on Lomeli’s grandmother’s menu) and Rajas Con Crema are just a few dishes that show off the menu’s diversity. (Oh yes, there are margaritas and great queso, too.)

There are two different opportunities for Habenera & The Guero’s fans to help with its evolution. Diners can attend the post-makeover grand reopening on Wednesday, February 5 at  7 p.m. Reservations via email to the showrunners are strictly required and diners are responsible for paying for their own meals. The deadline is Friday, January 31 at 2 p.m. Central Time and the event is first-come, first-served via email with no guarantees that you’ll get in. Use 1701 TX RESERVATIONS in the subject line so that the show can match you with the correct restaurant. Please include your contact information (full name, email address, cell number) your party size (number of people at your table) and the names of the people in your party. No children younger than eight are allowed.

Secondly, $10,000 doesn’t go that far in renovating a restaurant, so the Restaurant: Impossible showrunners ask those in the community to volunteer and help out. Some of the skills needed include painting, crafting, constructing, remodeling, cleaning, upholstery and decorating. Certification in the state of Texas may be required for certain types of professionals, such as electricians and plumbers. The show is only seeking volunteers, not paid contractors, and they must be 18 or older. Those who help will be asked to sign both a appearance release (because you may appear on camera during filming) and a volunteer agreement. A meal is provided. Clothing and shoes must be plain with no logos.

There are three volunteer shifts:

If interested, send an email by Friday, January 31 at 2 p.m. Central Time with your preferred shift, email address, cell number and skill set. Use the following subject line: 1701 TX Volunteer. According to the press release, everyone who volunteers is guaranteed a spot, but notice of the upcoming shift is emailed only one day before you need to be onsite. So, keep an eye on your inbox!

While no air date has been released yet, Food Network is likely to show the Restaurant: Impossible episode featuring Habanera & The Guero approximately two months after filming. We hereby predict that Irvine is going to encourage streamlining the menu. We do have really important hope for the end results, though: improve the space and make it more appealing to those who traverse I-45, but don’t mess too much with the already-great food.