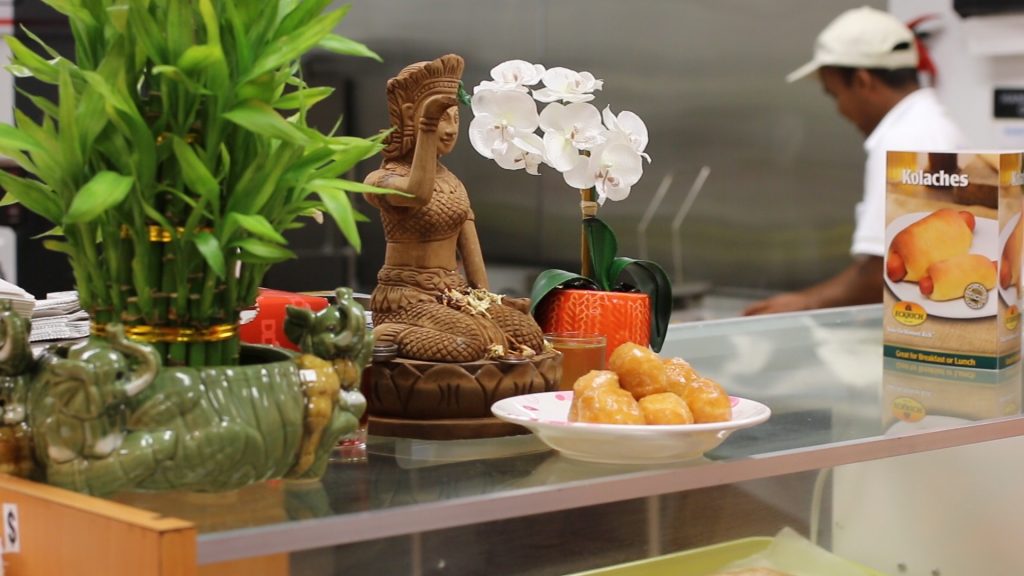 Still from the documentary "Donut People." Photo by Keeley Steenson.

According to a new short documentary, as many as 95-percent of the doughnut shops in Texas are likely owned and operated by Cambodians. For the approximately one million of those lucky enough to escape the brutal Khmer Rouge regime between 1975 and 1979, it represented a way to earn a living in the United States.

This history is documented in “Donut People”, a film by Houston-based Keeley Steenson and produced by former Houston Press restaurant critic and food historian Robb Walsh. Viewers get a tour of the Cambodian doughnut-making world in and around the Greater Houston area, including Donalds’s Donuts in Webster, Snowflake Donuts in Galveston and Morningstar in the Heights neighborhood of Houston.

The film opens with a lush shot of doughnuts in a fryer and then fades into Samoeurn “Sam” Phan stating, “It takes quite a bit to make one doughnut.” However, In New York, this past weekend, Phan and David Buehrer, the owner of Morningstar who trained under Phan in high school, made hundreds of the sweet, round treats for the attendees of the 13th annual Food Film Fest. There, the documentary was screened along with 16 other thoughtfully selected films, including the intriguing-sounding “The Ultimate Texas Burger Road Trip.” For their stellar efforts creating a multi-sensory experience related to the film, Phan and Buehrer were named Film Foodmakers of the Year.

Phan’s story, as well as those of other Cambodian refugees, is important and relatively unknown. According to a 2017 Washington Post article by Walsh, Phan and his mother escaped Cambodia in the late 1970s after his father was killed by the Khmer Rouge.

Like many of the over one million Cambodians refugee who fled at that time, the Phans walked through the jungles of Thailand to escape Pol Pot’s killing fields. After finally arriving in Thailand, they found a sponsor who helped them immigrate to Atlanta. There, Phan attended school and learned English.

Phan has done his part to make that happen. After owning and operating his own doughnut shops, he has helped over 20 Cambodian families open their own doughnut establishments.

Steenson’s documentary tells this story as well as the story of Roth Ouch, a second generation Cambodian doughnut entrepreneur, who operates Donalds’s Donuts in Webster, Texas. After spending his youth helping his parents make doughnuts, Ouch was at first reluctant to go into the family business, which his parents started in 1994. But he eventually came to the realization that we wanted to work for himself and own his own business.

Buehrer, who co-owns several other coffee shops in addition to Morningstar, is also featured in the film. While in high school, he worked with both Phan and Ouch. Rising in the early predawn hours, he would drive an hour or two to Magnolia to make doughnuts and then make the return trip before classes started at 7:30 a.m. Morningstar, which Phan and Buehrer co-own, represents the modern style of doughnut shop that Phan wants to continue opening in the future.

Buehrer and Phan’s story is featured in the final third of this insightful short, which debuted in Houston at the 2018 Foodways Texas Symposium and was partially funded by Klaasmeyer Construction and Foodways Texas, which Steenson has collaborated with to make several other food documentaries.

“Donut People” finds itself in good company as it shares the stories of this tight-knit group of Cambodian immigrants who, like so many immigrants throughout our history, are shaping the way Houston eats. Here are the other award-winning food films and filmmakers:

The festival’s mission is to highlight “the benchmark of independent food-filmmaking” along with the food featured in the film. To enhance the viewers experiences of the documentaries, samples of the food discussed are served as the film is being screened.

When asked about Donut People, Steenson said, “I make films to amplify voices and stories that you don’t hear from everyday. Sam is definitely a hero and he has a really special, authentic relationship with David. I’m so happy that making this film gave Sam the recognition he deserves.” You can watch the film below.

Disclosure: David Leftwich, the author, is the current president of Foodways Texas’ Advisory Board.